Moment of silence for Arsene James at Cabinet meeting 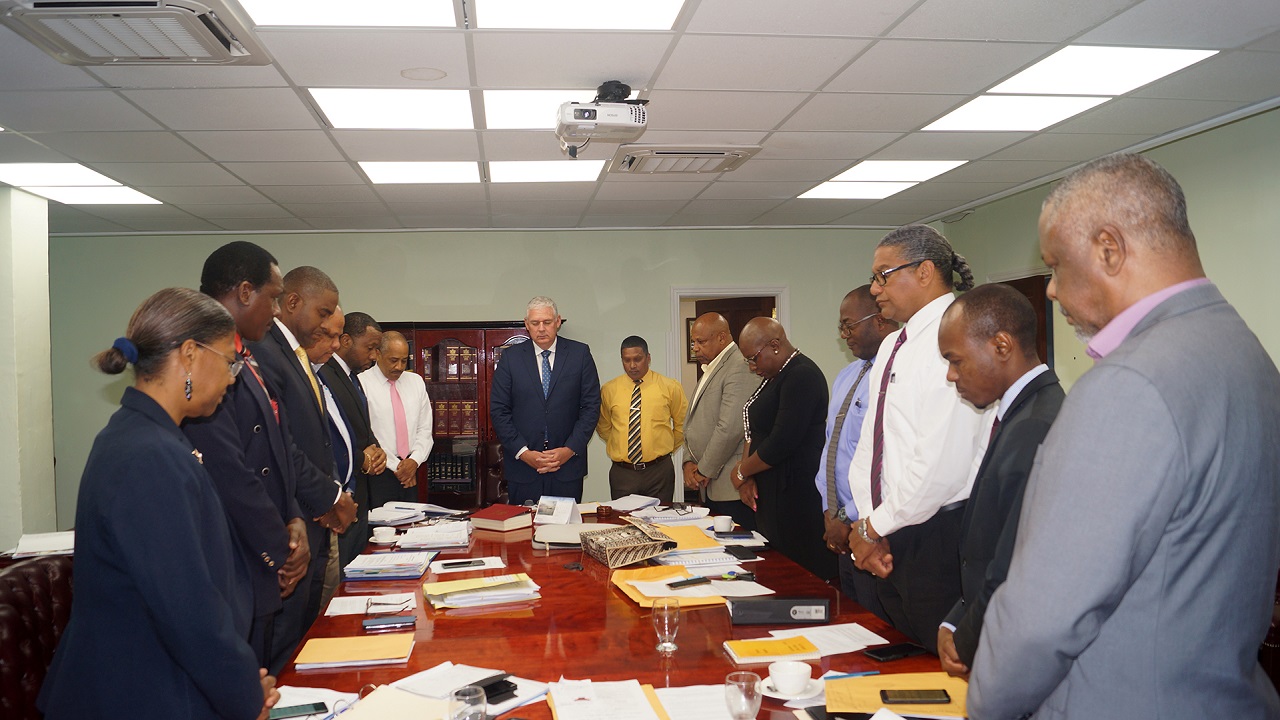 The Cabinet of Ministers paid tribute to the late Micoud South Member of Parliament (MP), Mr. Arsene James, with a moment of silence at Monday morning’s Cabinet meeting.

The nation received news on Sunday July 29th 2018 about the passing of Mr. Arsene Vigil James, a distinguished educator, a former Leader of the Opposition and Saint Lucia’s Minister of Education from 2006 to 2011.

Prime Minister and current Micoud South MP, Honourable Allen Chastanet, on Monday gave a heartfelt tribute to Mr. James stating that the news of his death had been a shock to the Government and the people of the community of Micoud South.

“My constituency is very saddened,” said PM Chastanet. “Mr. James was a person who had made a significant impact in the constituency and everyone would remember him most for ‘friendly society’ which is something that he loved. He is going to be greatly missed.”

Prime Minister Chastanet explained that Mr. James was involved in several projects in the constituency including the Desruisseaux Road and was especially concerned about the water situation and was integral to the Ti Rocher Micoud Pipe Laying project.

“Mr. James was the consummate gentleman,” the Prime Minister went on. “He continuously stayed above the fray. He always allowed the community and the people to remain at the forefront. He had great humility and was a great statesman. I would like to say to the young people of our country that may be discouraged by politics that if they look back at his history, he has set an incredible example and a very high standard for the rest of us to be able to pursue.”

On behalf of the Government and People of Saint Lucia, Prime Minister Chastanet, expressed condolences to the James family, friends of Mr. James, former students and colleagues, as well as the people of Micoud.

Also paying tribute to Mr. James was Minister for Education and Micoud North MP Hon. Dr. Gale T.C. Rigobert who described Mr. James’ passing as a loss for the entire district of Micoud.

“Mr. James distinguished himself as a statesman of extraordinary capacity, wisdom, poise and grace. I have no recollection of him being dishevelled unnerved or angry. He was very principled,” Minister Rigobert noted. “One of the things I think he will be most remembered for is his people centered politics.”

Minister Rigobert also referred to Mr. James’ involvement in “friendly society” which is an organisation to which members pay small amounts of money over a long period in the event of illness or loss of life.

“I want to make special mention of the people from the friendly society that he managed. In a sense he was there for them every Sunday when they went to pay their society,” the Micoud North MP stated. “That is a tradition that we are losing in this country. Mr James being there on the day that society was going to be paid was of paramount importance to him and that is how embedded he was in the community. Even throughout his political career and throughout his professional career this is something that meant a lot to him because that is where he got to connect with the people.”

“I am especially glad that notwithstanding years of delay that he knew before his passing that finally that water project that he had fought for so diligently will happen,” Dr. Rigobert stated. “I know that the invitations were given to him and he was carefully involved in the crafting of that water project. In my mind that was his last gift to the people of Micoud South.”

Minister Rigobert expressed condolences on behalf of the Ministry of Education and the constituency of Micoud North and to all who knew Mr. James.