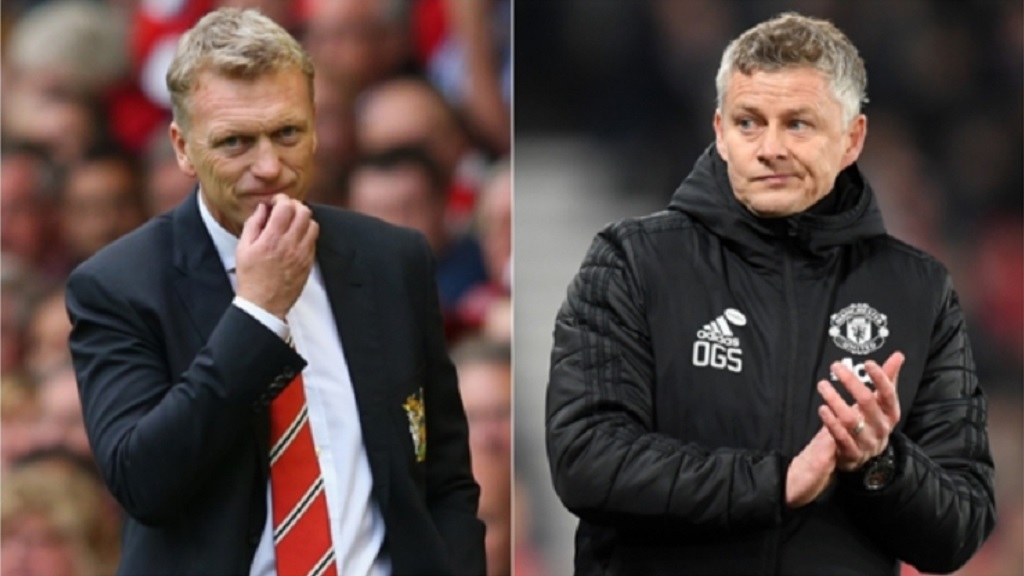 On this day seven years ago, Manchester United clinched their 20th top-flight title in England in Alex Ferguson's final season.

Robin van Persie's magical hat-trick at Old Trafford secured a 3-0 win over Aston Villa and ensured the Premier League trophy would be wrested from the grasp of Manchester City.

At the end of 2012-13, Ferguson was replaced by 'The Chosen One', David Moyes, who oversaw 34 league games before his six-year contract was terminated in ruthless fashion after a miserable defeat to old club Everton.

There have been ups and many more downs under Louis van Gaal, Jose Mourinho and Ole Gunnar Solskjaer since then, but there were signs United were finally back on track before the coronavirus pandemic brought football to a halt.

United played 29 games this term before the season was paused, winning 12, drawing nine and losing eight. That left them on 45 points, at an average of 1.55 points per game.

For good measure, Ryan Giggs won two of his four matches in charge after Moyes' exit, at an average of 1.75 points per game. His one defeat came at home to Sunderland.

Solskjaer has been happy to embrace the demands of the United fan base when it comes to attacking football - but less so than Moyes, perhaps.

That's not for want of trying. In 2019-20, United have attempted 429 shots, averaging 14.8 per game, a larger number than the 13.4 under Moyes. They have already had more shots on target this season (166) than they did under Moyes (161), despite playing five games fewer. In fact, their average of 5.7 shots on target per match is better than the 5.6 recorded in Ferguson's final season.

Little wonder Solskjaer has asked his strikers to get some extra practice in during lockdown.

HARRY'S GOT HIS BACK

One thing about Solskjaer's United that is sometimes overlooked is that they seem to be growing more and more solid.

United conceded 40 goals in Moyes' 34 games in charge - that's 1.2 per match. In 2019-20, that number stands at a little over one per game. They have kept eight clean sheets this term, four down on Moyes' tally.

On average this season, United have faced 10.45 shots per game, well down on the 12.3 under Moyes and 12.8 in Ferguson's final term, when a leaky defence was generally bailed out by the Van Persie-inspired forward line. The shots-on-target numbers look slightly better, too: Solskjaer's side has faced 3.6 per game on average this season, lower than the figures under Moyes and Ferguson (3.9).

The numbers seem to indicate there is not much to split Solskjaer in 2019-20 and Moyes in 2013-14 - so why is the Scot's season such a painful memory for fans, while the current boss has a fair bit of backing?

One reason is their respective record against the Premier League's so-called 'big six', which does not make for happy reading for Moyes.

In 10 games, Moyes managed just one win against those opponents - a 1-0 defeat of Arsenal at Old Trafford in November. He suffered six defeats, scoring just six goals and conceding 18, six of which came in back-to-back 3-0 losses at home to Liverpool and Manchester City.

Solskjaer, meanwhile, has something of a knack for beating the big guns. This season, United have won five and lost just two of their nine big-six meetings, scoring 14 goals and conceding just eight. That win percentage of 55.6 per cent is better than in Ferguson's last season in charge when United won five from 10, lost three, scored 17 and conceded 15.

It seems United are slightly better at defending and slightly worse at attacking now than they were under Moyes. However, given the deficit in shot conversion under Solskjaer, the signs show they are creating enough opportunities to score more goals and just need a cooler head up top to boost those key numbers. Perhaps that's where rumoured interest in Harry Kane comes in.

If they can become a bit more ruthless and keep up their formidable record against the stronger sides, United look to be heading for better times under Solskjaer. The same could not be said on April 22, 2014, when the Moyes era came crashing down.

Solskjaer not worried about job security despite Pochettino rumours