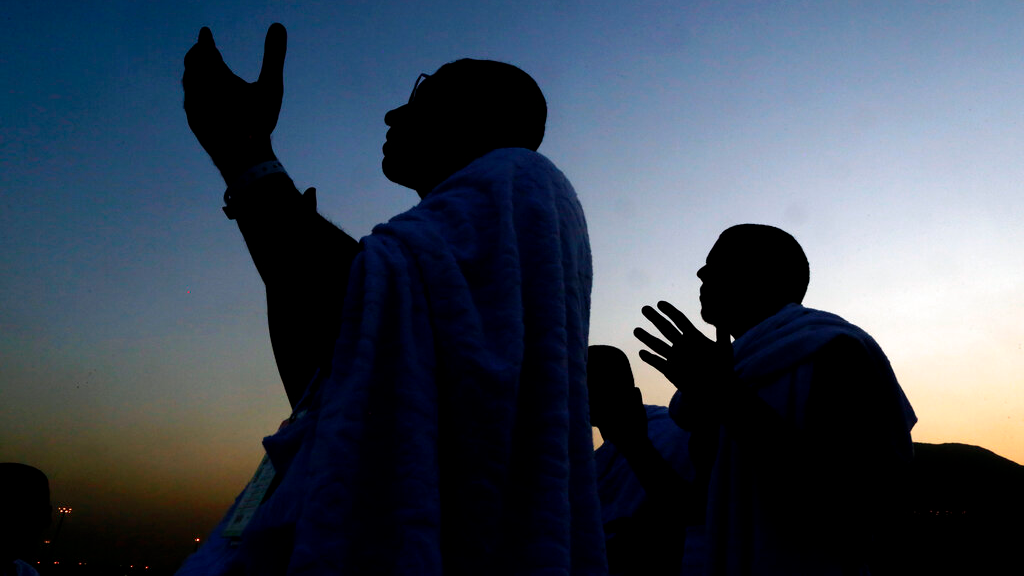 More than 2 million Muslims gathered Saturday at the sacred hill of Mount Arafat in Saudi Arabia for an intense day of worship and reflection on what's considered the climax of the Islamic hajj pilgrimage.

Many had tears streaming down their faces as they raised their hands in worship on the slopes of the rocky hill where the Prophet Muhammad delivered his final sermon some 1,400 years ago, calling for equality and unity among Muslims. Thousands had walked there through the pre-dawn darkness.

As one of the largest religious gatherings on earth, this second day of the hajj is often the most memorable for pilgrims. They stand shoulder to shoulder with Muslims from around the world, all considered equal in Islam before God, seeking mercy, blessings, good health, bounty and healing.

This year, more than 1.8 million people from more than 160 countries came to Saudi Arabia to perform the hajj, according to Saudi officials. Some 20,000 are U.S. citizens and residents. Around 200,000 additional pilgrims are Saudi residents or citizens.

The five-day hajj pilgrimage is required of all Muslims once in their lifetime, if they are financially and physically able to make the demanding pilgrimage. Because the Islamic calendar is a lunar one, the time of year when the hajj takes place varies, and when it falls in the hot summer months, temperatures can soar to over 100 F (38 C).

Most pilgrims also save up money for years to afford the trip, which takes them to Islam's holiest sites to perform a series of ancient rituals that date back thousands of years.

While following a route the Prophet Muhammad once walked, Muslims trace the rites of hajj back to the prophets Ibrahim and Ismail, or Abraham and Ishmael as they are named in the Bible.

The oldest pilgrim this year is 103-year-old Noah Lanai from Thailand, according to Saudi Arabia's state-run media. The woman came to the hajj with her son and was quoted in local media saying she'd long dreamt of performing the hajj and praying in Mecca.

Muslims believe the hajj is a chance at atonement and an opportunity to erase past sins. It's also a chance to pray for unity and peace among Muslims as conflicts rage in Syria, Yemen and Libya, and Muslim minorities face increased threats around the world.

"I wish the best for all people, and hope Syria will return to normal and hope all people will be good," said Syrian pilgrim Ahmad Wahid as he ascended Mount Arafat for prayer and worship.

"We thank God of his blessings, and we pray for Yemen's peace and stability," he said.

During the hajj, male pilgrims wear simple, white terry cloth garments, while women forgo makeup and perfume and wear loose-fitting clothing and a head covering. This state of "ihram," or spiritual purity, is intended for pilgrims to focus on the inner self over their outward appearance.

The white garments worn by men are forbidden to contain any stitching — a restriction meant to emphasize the equality of all Muslims and prevent wealthier pilgrims from differentiating themselves with more elaborate garments.

After spending the day in prayer on Mount Arafat, pilgrims will head toward an area called Muzdalifa, about 5.5 miles (9 kilometers) west of Mount Arafat. Many walk, while others use buses.

In Muzdalifa, pilgrims will rest and pick up pebbles that will be used for a symbolic stoning of the devil and casting away of evil. This takes place over three days in Mina, an area about 12 miles (20 kilometers) east of Mecca. The final days of hajj coincide with Eid al-Adha, or the festival of sacrifice, celebrated by Muslims.

Watch: The hajj pilgrimage and its significance in Islam

Muslim pilgrims begin hajj, but this year without Iranians