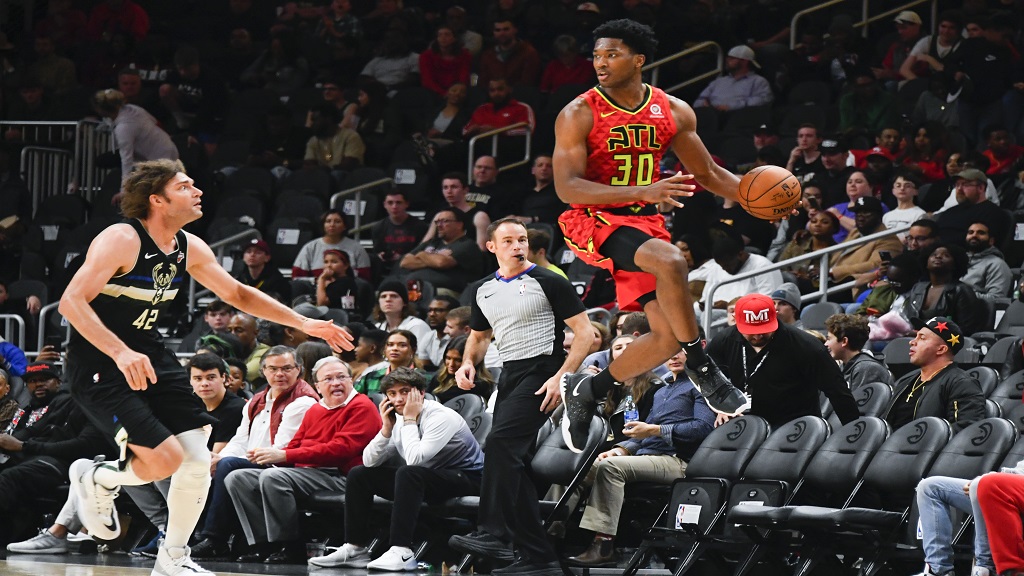 Atlanta Hawks center Damian Jones (30) saves a ball from going out of bounds as Milwaukee Bucks center Robin Lopez (42) defends during the second half of an NBA basketball game Friday, Dec. 27, 2019, in Atlanta. (AP Photo/John Amis).

The Milwaukee Bucks cruised without star Giannis Antetokounmpo in the NBA, while the Miami Heat recorded an impressive win on Friday.

Antetokounmpo was sidelined with back soreness, but the Bucks were untroubled in a 112-86 thrashing of the Atlanta Hawks.

Khris Middleton starred with 23 points, eight rebounds and seven assists, while Ersan Ilyasova had a double-double of 18 points and 17 rebounds.

Milwaukee improved to 28-5 as they bounced back from their loss to the Philadelphia 76ers.

Miami are third in the Eastern Conference and edged the Indiana Pacers 113-112.

Bam Adebayo's double-double of 18 points and 15 rebounds led the Heat as Jimmy Butler contributed despite struggling from the field.

The Boston Celtics posted their fifth straight win by beating the Cleveland Cavaliers 129-117.

Jaylen Brown (34 points) and Jayson Tatum (30) were the stars for Boston.

Steven Adams' 14 points, 12 rebounds and three assists helped the Oklahoma City Thunder to a 104-102 overtime win against the Charlotte Hornets.

The Golden State Warriors made it four straight wins as D'Angelo Russell's 31 points guided them past the Phoenix Suns 105-96.

The Philadelphia 76ers are 16-2 at home but slipped to 7-9 on the road after crashing to a surprise 98-97 loss to the Orlando Magic.

After back-to-back losses, the Toronto Raptors (21-10) face a test against the Celtics (22-7) at TD Garden on Saturday.