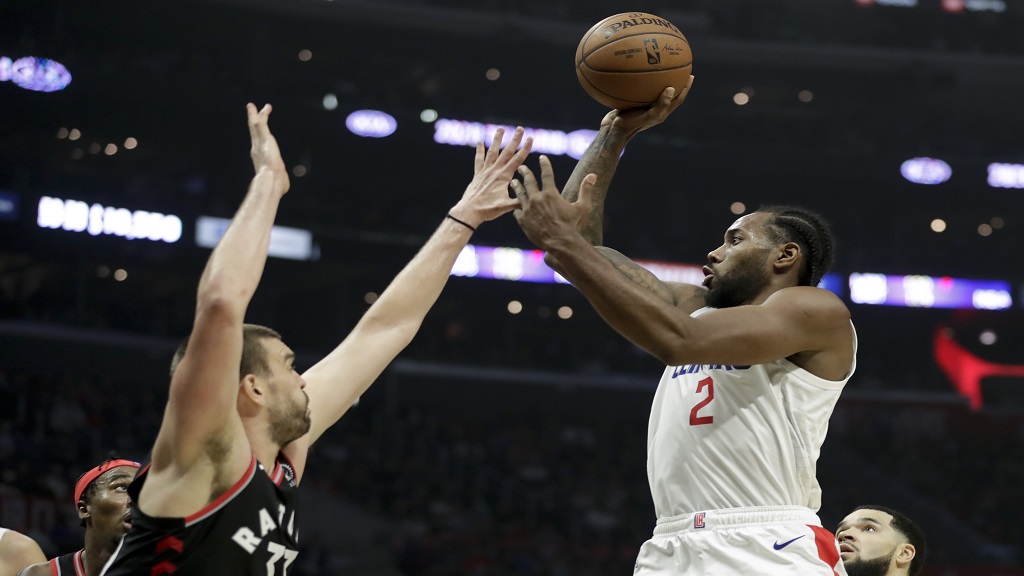 Kawhi Leonard wasn't at his best against his former team. His new teammates knocked down big shots and won anyway.

Leonard struggled on 2-for-11 shooting and had nine turnovers, but Lou Williams led a big effort from the bench with 21 points and the Los Angeles Clippers beat the defending NBA champion Toronto Raptors 98-88 on Monday night.

Leonard finished with 12 points, 11 rebounds and nine assists to go with those nine turnovers, prompting Clippers coach Doc Rivers to joke about "almost a quadruple-double."

Throughout the game, Leonard faced plenty of double coverage.

"As soon as I walked across half-court they tried to get the ball out of my hands," he said. "They did a great job on me defending and sending an extra body. It got me better and it's going to get my teammates better."

"I had a great time there. It's the next chapter now. I can't live in the past," he said. "I'm with a different team and they want to have that same feeling."

The Clippers shot just 37% but dominated the boards 66-38, led by 12 each from Patrick Beverley and JaMychal Green.

Leonard's first five points all came on free throws, including two technicals. He missed his first six field-goal attempts and finally scored on a coast-to-coast layup midway through the third quarter to put the Clippers up 62-55.

From there, the Raptors outscored Los Angles 23-11 the rest of the period. Pascal Siakam had seven points and Fred VanVleet added five in the spurt as neither team led by more than two until Matt Thomas' 3-pointer and basket sent the Raptors into the fourth leading 78-73.

"It's just fun, just be able to compete against guys who you were with last year," Leonard said. "It's a little bit more competitive because you do talk to them."

"Maybe whispered a little bit to him here or there about missing a free throw," Fred VanVleet said, "but it didn't work."

Siakam had 16 points and 10 rebounds, Norman Powell added 15 points and VanVleet had 14 points for the injury-depleted Raptors, who had their three-game winning streak snapped in the second game of a back-to-back after beating the Lakers on Sunday.

"That's a hell of a team to play on a back-to-back short-handed," VanVleet said. "Just kind of ran ourselves into the mud and give those guys credit, they closed it out."

VanVleet was 1 for 7 in the fourth after notching three double-doubles in his previous five games.

Toronto was 4 of 24 from the floor in a fourth-quarter that featured a series of mad dashes and bodies piled in the paint on both ends.

The Raptors tied the game for the last time at 82 on Chris Boucher's 3-pointer. They managed just three field goals the rest of the way.

Kemba Walker contributed 29 points, while Jaylen Brown had a double-double of 25 points and 11 rebounds.

James Harden had 39 points, nine assists and four rebounds in the Houston Rockets' 122-116 win over the New Orleans Pelicans.

Jayson Tatum has enjoyed a fine season, but he struggled against the Mavericks. The forward went one-of-18 for just five points in nearly 35 minutes.

The Los Angeles Lakers (7-2) visit the Phoenix Suns (6-3) looking to bounce back from their loss to the Raptors.