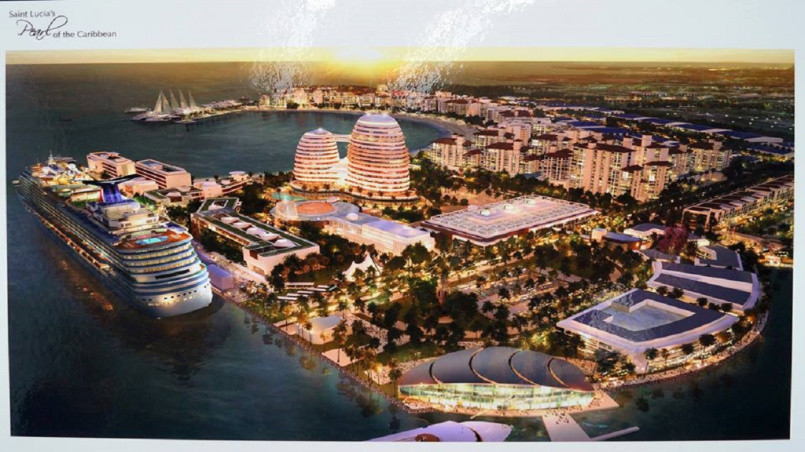 With the Pearl of the Caribbean project for Vieux Fort back on the front burner for the government and the opposition St. Lucia Labour Party (SLP) promising to respond in a substantive way on Thursday, the project seems set to be embroiled in yet another political controversy.

Controversy is nothing new for the project and its developers, who first found themselves enmeshed in political uproar soon after signing the agreement with government in July 2016, when the purported agreement found its way into the public domain via the internet.

Opposition Leader Philip J. Pierre has said that while he is not against development, he is against how this particular deal with Desert Start Holdings (DSH) was crafted and has called on Prime Minister Allen Chastanet to be transparent to the people of the country in his dealings with DSH.

Chairman of DSH Teo Ah Khing at a press conference last week displayed pictorials of what the Il Parata site (phase two) would look like after completion hopefully two to three years from now and of the recently recommenced horse racing track set to be completed in October.

Khing's presentation did not move the SLP. Pierre said he does not understand how the prime minister could undertake a project with such a wide scope and scale and not discuss it with the citizens of the country.

“A development of such a scale you cannot, you cannot just go into a room with foreigners and show how the landscape will change,” Pierre said.

Ernest Hilaire, the party’s spokesman on investment, exclaimed that that Khing's presentation cannot substitute, in any way, for a serious dialogue with the people of St. Lucia.

According to Pierre, the prime minister has failed to keep his promise of holding discussions about the project as it has been tweaked and refined over time.

Pierre said that a letter he wrote to the prime minister received no response in what he interpreted as contempt and arrogance on the part of Chastanet.

Said Pierre, ‘I wrote the prime minister inviting him to a discussion on DSH, he did not respond. I wrote him a civil letter with no accusations, no innuendo,” Pierre said.

The SLP and a group out of the south of the island calling itself Vieux Fort Concerned Citizens Coalition for Change (VFCCCC) have been the loudest cynics of the project. Both the government and the opposition have backed demonstrations for and against the project in the past. The controversy fizzled out last year until flaring up once again last week.