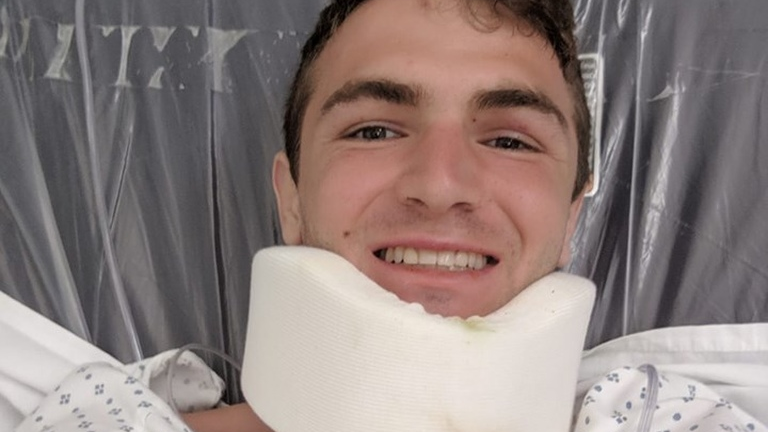 An Indiana newlywed is now recovering in a Fort Lauderdale Hospital after he fell into a dormant volcano while on his honeymoon in St Kitts.

Clay Chastain is suffering temporary deafness in one ear and a skull fracture.

Writing on his Facebook page, Chastain wrote that his wife Acaimie Chastain helped him out of the Mount Liamuiga volcano,, the highest point on the island.

"While on my honeymoon with Acaimie Chastain we were hiking up a volcano in St Kitts, one of the tallest in the Caribbean. We had already reached the top and since it was a dormant volcano the crater of it was a lush prairie. There was a rope trail leading down to it and I trusted the ropes with my weight too much and one of them snapped," he wrote.

Chastain, who admitted he did not use a tour guide, estimated he fell about 50 to 70 feet.

"My wife Acaimie is extremely strong and managed to help me back up out of the volcano crater and down the trail up its side until we got signal which was about two miles while I was collapsing and vomiting blood the entire way (which apparently was just coming from lacerations in my mouth and nose). I only have a slight fracture in the base of my skull and a severe concussion," he said.

Due to his injuries, Chastain could not fly back to the US on a commercial flight and through GoFundme account was able to raise US$30,000 to organise a medical flight out of the island.

Loop reached out to the St Kitts Tourism Authority but was told they are not commenting on the story at this time.

Watch: Tourist rescued after being dragged out to sea in Taiwan