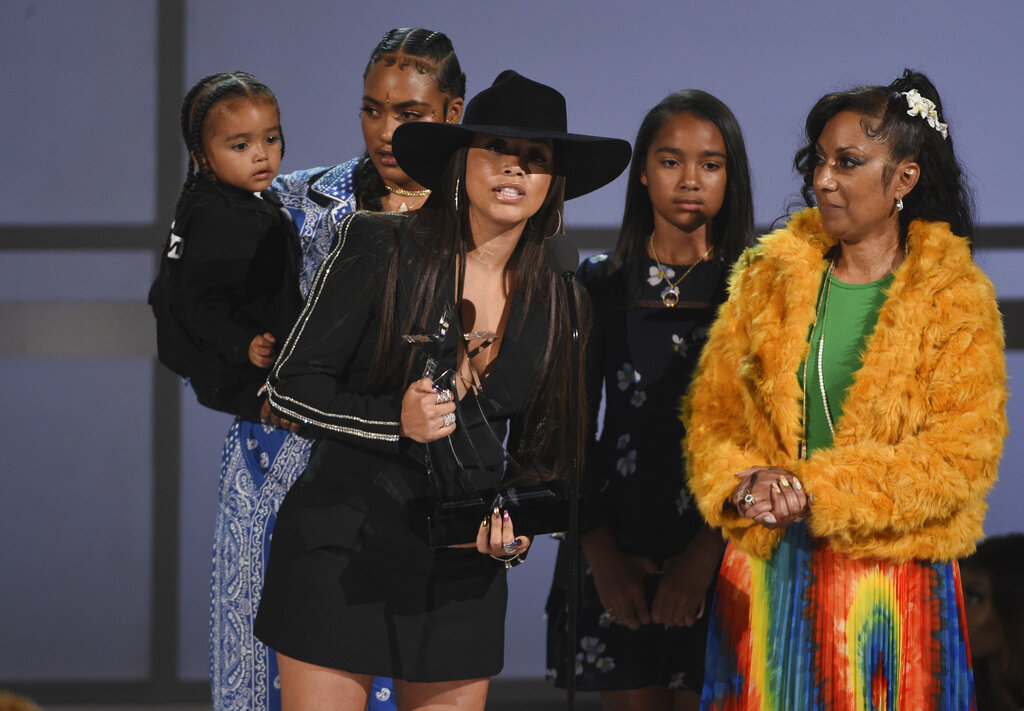 Lauren London accepts the humanitarian award on behalf of late rapper Nipsey Hussle at the BET Awards on Sunday, June 23, 2019, at the Microsoft Theater in Los Angeles. (Photo by Chris Pizzello/Invision/AP)

The Latest on the 2019 BET Awards, which are being presented Sunday at the Microsoft Theater (all times local):

The late Nipsey Hussle was honoured with the Humanitarian Award at the BET Awards.

Rapper T.I. presented the posthumous award Sunday to his family that included his mother, father, grandmother, his children and girlfriend, Lauren London. The rapper was shot to death on March 31 outside his South Los Angeles clothing store in what police said was a personal dispute.

Hussle's mother, Angelique Smith, recalled the moment she visited the crime scene where her son was shot. The rapper's grandmother said she loved him and that he "did his job."

Marsha Ambrosius performed "Real Big," a song she collaborated with Hussle. YG took the stage performing "Last Time That I Checc'd," then DJ Khaled and John Legend closed out the set with "Higher," a track that also featured Hussle.

Tyler Perry spoke about the worthiness of black women and his journey to becoming a filmmaker after accepting the Ultimate Icon Award at the BET Awards.

Perry says he wants to be an inspiration more than an icon as he preached entrepreneurship on Sunday. He is best known for his African-American comedies and his character "Madea" through his film series.

In 2006, Perry opened a 200,000-square-foot studio in Atlanta. He expanded and opened a different state-of-the-art film and television studio in 2015 on the former Fort McPherson Army Base, which is now a 330-acre campus that is one of the largest production studios in the country.

Taraji P. Henson presented Perry with the award. Cicely Tyson said Perry is a "blessing to us all" in a video statement.

Mary J. Blige praised God, thanked her mother and spoke about a healed relationship with her father after accepting the Lifetime Achievement award during the BET Awards.

The Grammy winner talked about trying to make history while positively serving others before she performed several of her hits including "My Life," ''No More Drama" and "I'm Going Down" while wearing an all-white trench coat trimmed with white fur and a diamond-studded waist belt on Sunday.

Blige peeled off her long coat, sporting mini shorts and high boots as she picked up the tempo. The singer danced across the stage before she brought out Lil Kim to perform "I Can Love You" then "You're All I Need" with Method Man.

Rihanna presented Blige with the award calling her the "queen of hip-hop and R&B." She also applauded Blige for being the first person to compete for both acting and songwriting award in the same year.

Blige was nominated for an Academy Award for best-supporting actress and original song for her work on the Netflix film "Mudbound."

In a video, Diddy, Queen Latifah, Nas and Andre Harrell praised the singer for his musical skills.

The men, known, as the Central Park Five each briefly spoke before introducing a performance by Grammy-winning singer H.E.R. at Sunday's BET Awards.

Yusef Salaam, Antron McCray, Kevin Richardson, Raymond Santana and Korey Wise received a standing ovation as each walked on stage. The men's story was shown in the Netflix series "When They See Us," which dramatized the events surrounding their trial.

The five men were exonerated in 2002 after being charged with the 1989 rape of a white woman in New York's Central Park.

After each spoke, H.E.R. told a socially conscious poem before the Grammy winner performed "Lord Is Coming," which also featured rapper YBN Cordae.

In a video, the 20-year-old rapper and singer Billy Ray Cyrus rode on horses down the blue carpet then showed up on stage in cowboy attire.

Cardi B is the winner for the best album at the Sunday's BET Awards.

The Grammy-winning rapper pranced up the stairs to accept her award wearing a lime green dress. She bragged about the success of her multi-hit album "Invasion of Privacy" before she thanked everyone featured on the project.

Here's the full list of winners at the 2019 BET Awards.

— Video of the year: Childish Gambino, "This Is America"

— Album of the year: Cardi B, "Invasion of Privacy"

— Sportswoman of the year: Serena Williams

— Sportsman of the year: Stephen Curry

Rihanna is the wealthiest female musician

Cardi B indicted on felony charges