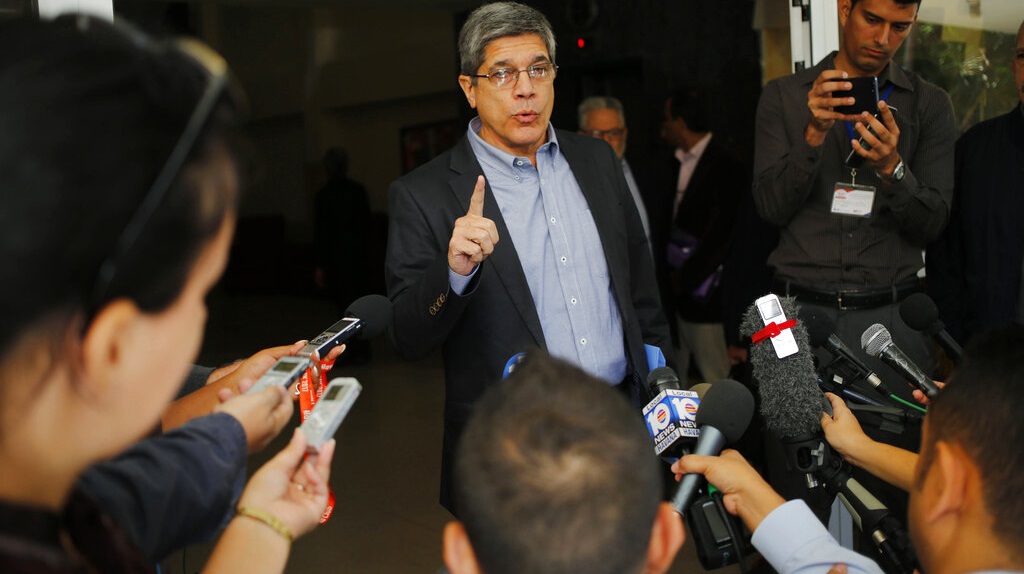 In this Dec. 12, 2018, file photo, Cuba's Director-General of U.S. Affairs Carlos Fernandez de Cossio makes a statement to reporters, in Havana, Cuba. De Cossio says his nation has no troops in Venezuela but it maintains the right to military and intelligence cooperation with its ally. (AP Photo/Desmond Boylan, File)

Cuba has no troops in Venezuela and engages in no security operations there but maintains the right to carry out military and intelligence cooperation, a top Cuban diplomat said Wednesday in his government's most detailed response yet to U.S. accusations that its forces are propping up President Nicolás Maduro.

(Video: Journalist Gregory Jaimes is hit by pieces of mortar during clashes between Anti-Maduro protests and the military. Video recorded on May 1 around 5 pm in Avenida Juan Pablo Pernalete in Altamira, Caracas. Video courtesy Spectee Inc.)

Carlos Fernández de Cossío, Cuba's director-general of U.S. affairs, told The Associated Press in Washington that the U.S. is falsely accusing his country of having more than 20,000 troops and intelligence agents in Venezuela.

De Cossío said there are roughly 20,000 Cubans in Venezuela but virtually all are medical workers.

"There are no troops," he said in English. "Cuba does not participate in military operations nor in security operations in Venezuela."

De Cossío said that despite the lack of Cuban boots on the ground, he could not deny the existence of intelligence cooperation because "I don't have that information." But broader intelligence or military cooperation would be "totally legitimate," he added.

"The United States has over 800,000 Americans stationed around the world with over 600-700 military bases anywhere in the world. Any two countries in our region have military or intelligence cooperation and we have it with many countries. So it is totally legitimate, it is a sovereign right of Cuba and Venezuela to do so," de Cossío said.

"But what I am saying is that in spite of having that right, there are no military personnel of Cuba or troops, nor do we participate in any military or security operation as is constantly alleged," he added.

Cuba and Venezuela have had an extraordinarily tight alliance over the last two decades, forged when Cuban leader Fidel Castro counseled Hugo Chávez of Venezuela on surviving a coup in 2002. The relationship has since centered on Venezuela sending Cuba an estimated $30 billion worth of oil between 2003 and 2015, in exchange for Havana dispatching tens of thousands of medical workers and other government employees. Cuban programs in Venezuela have ranged from preventive health care to sports coaching and agronomy. According to U.S. officials and Venezuelan defectors, they also include intelligence, security and military cooperation.

"Cuban intelligence forces, who have suppressed and censored their people for 60 years, have invaded Venezuela," said Sen. Marco Rubio, a Florida Republican seen as a major influence on the Trump administration's Latin America policy. "The Cuban regime provides security for Nicolás Maduro, who no longer trusts his countrymen, and actively leads operational assistance to crush the Venezuelan opposition."

Ben Rhodes, who negotiated detente with Cuba as a deputy national security adviser to President Barack Obama, said the Trump administration is confusing doctors with military and intelligence agents but it is indisputable that Cuba has worked closely with the Venezuelan government on security matters.

"The Cubans have a significant amount of personnel and probably the bulk of those are doctors but I'm also sure they have people in various adviser positions related to ideology and security," Rhodes said.  "I don't think it's a numbers question, I think it's more a question of replicating the tactics, drawing on advice and having some Cuban presence that they can count on."

Rhodes said the Trump strategy of taking on Cuba and Venezuela closed off the possibility of a negotiated exit for Maduro and put the two socialist governments on comfortable terrain, confronting an American government that could easily be portrayed as bullying and imperialist.

The Cubans and Venezuelans, they know how to operate in this environment," Rhodes said. "They know what it's like to be in a zero-sum ideological game in Latin America. They're better at it. These people have been doing this for a long time."

The collapse of Venezuela's oil industry led the country to cut back oil shipments to Cuba from roughly 113,000 barrels a day at their high point to 40-45,000 barrels today, said Jorge Piñón, an expert on both countries' energy strategies at the University of Texas at Austin. Today along with Cuba's domestic oil production, Venezuelan shipments cover a little more than half of Cuba's energy needs, leaving it to obtain the rest from other sources including Russia and Algeria, Piñón said. The terms of those other deals, and the degree to which Venezuela is helping fund them with cash or debt, remain unclear, he said.

The 20-year relationship has made Venezuela the foreign country best-known by ordinary Cubans, after perhaps the United States. It's hard to find a Cuban family that doesn't have at least one relative who's served on a Venezuelan "mission," and at least one other living in South Florida.

The exact nature of the Cuba-Venezuela relationship remains hidden to the public eye, and the subject of increasing tensions with Washington.

Cuba has a large and highly professional security and intelligence apparatus, which includes thousands of operatives who would not be considered military troops. Venezuelan defectors have reported the presence of Cubans in key positions among the Venezuelan armed forces and intelligence services, but to date there has been no public proof.

The Trump administration has nonetheless repeatedly insisted that there are more than 20,000 Cuban security operatives in Venezuela tasked with directly supporting Maduro.

"If this afternoon 20-25,000 Cubans left Venezuela, I think Maduro would fall by midnight," U.S. National Security Adviser John Bolton said at the White House on Tuesday. "It's this foreign presence that sits on top of the military, sits on top of the government, that makes it impossible for the people's voice to be heard."

De Cossio's deputy, Johana Tablada, told reporters in Havana that all of the Cubans in Venezuela are civilians and 94 percent are involved in medical missions.

She called Bolton a "pathological liar" with a long history of false statements including claiming in 2001 and 2002 that Iraq had stores of chemical weapons and that Cuba had biological weapons.

The biological weapons claim has long made Bolton one of the most detested American figures among Cuban government officials, who have viewed his return to White House with dread.

Bolton is seen as a key figure in the United States sharp U-turn on Cuba, from detente under President Barack Obama to open hostility under Trump. In recent months the U.S. has pledged to limited Cuban-Americans' remittances to Cuba, threatened to impose new regulations on travel here and allowed Americans to sue foreign companies doing business involving properties confiscated during Cuba's 1959 socialist revolution, a measure that goes into effect Thursday.

Trump on Tuesday threatened that "a full and complete embargo, together with highest-level sanctions, will be placed on the island of Cuba ... if Cuban Troops and Militia do not immediately CEASE military and other operations," in Venezuela.

Trump was vague on what new measures are under consideration but De Cossío said Cuba had withstood 60 years of a U.S. trade embargo and wouldn't be deterred by further sanctions.

"Somebody should have informed him that Cuba is not easily intimidated," De Cossío said. "Many of his predecessors have tried it unsuccessfully. It is something that won't work and it won't be productive for the United States."

Chávez and Castro said they first met in 1994 when the rising Venezuelan leader was personally welcomed by the Cuban president during a visit to address a conference in Havana. After Chávez became president in 1999, Castro's aid was seen as key to defeating the attempt to unseat him.

Fueled by hundreds of billions in Venezuelan oil bounty during a long stretch of high oil prices, the pair founded leftist regional bodies that worked to undo U.S. influence in Latin America, and Venezuela filled with Cubans.

"I had the luck of being personally seen off by the Commander in Chief (Castro) when I went to Venezuela along with 80 or so other medical workers," recalled Dr. Rafael Antonio Broche, who went to Venezuela in 2003 and served there under 2011.

Chávez's foreign minister, Maduro, made frequent visits to Cuba that continued after Chavez died in 2013 and his hand-picked successor replaced him. His experience in Cuba went further back. According to accounts from Venezuelan leftists, Maduro studied for a year in the 1980s at a Cuban Communist Party institute dedicated to training future leaders.