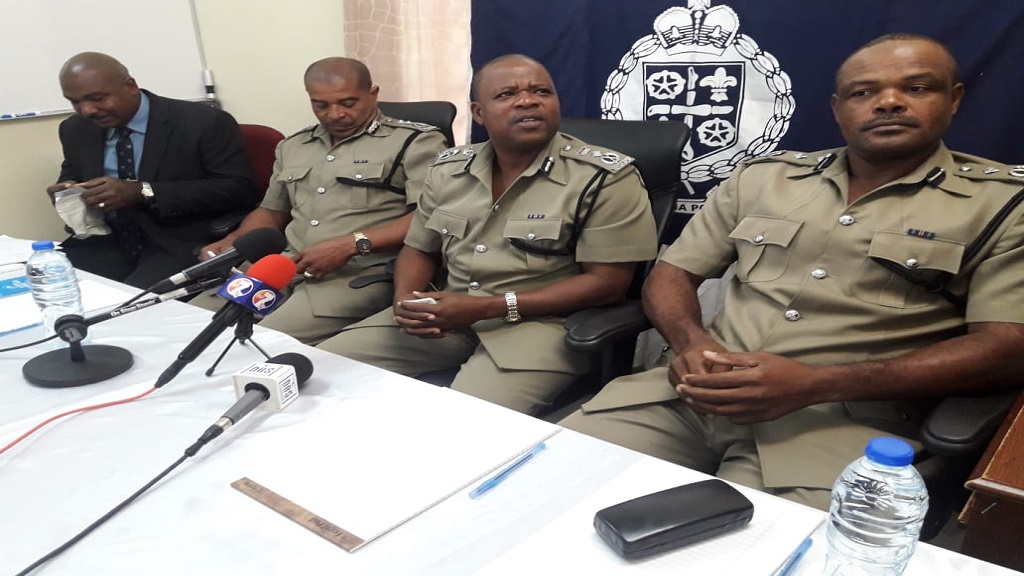 Citing last year as a relatively good year for police officers, Police Commissioner Severin Monchery and other members of the police hierarchy are struggling to understand who would be so brazen as to burglarize four of their departments over the Christmas holidays.

In the force’s first press conference for 2019 which featured Monchery, his deputy Milton Desir, and Assistant Commissioners Wayne Charlery and George Nicolaus, Commissioner Monchery thanked “his hard working officers” for their efforts last year and commended the public in general for “their good conduct.”

But Monchery could not shy away from the fact that four police departments, including an extension to the Immigration Department, were burglarized just about two weeks ago, an act Charlery described as embarrassing to the police force.

Also burglarized were the Writ Department, the Vulnerable Persons Unit, the Criminal Administration Office and the Criminal Records Office.

"It is an embarrassing incident, nevertheless we have to revamp our security features and our protocols for police agencies or units that are in commercial places,” Charlery said.

News of the burglary first appeared on social media where it was claimed that upwards of 75 blank Saint Lucian passports were stolen from one of the departments that were broken into, all of which are located in the La Mar building on Bridge Street in downtown Castries.

Monchery and Charlery both refuted social media and local media claims of passports being stolen. Charlery stated that such reports “are totally erroneous, not true at all.”

Monchery said that an extension to the Immigration Office that deals with citizenship, where visitors go to extend their time in the country or to be interviewed for citizenship, not to be mistaken for the Citizenship Investment programme, is also on the floor where the other police departments that were broken into are in the La Mar building. That extension, he said, was broken into but no passports are kept there, “so there’s no way passports could have been stolen from that department”.

So where are passports stored?

“What I can say is that they are not stored at Immigration,” Monchery said adding that for security reasons he cannot divulge the location of the passports.

He does not see the burglaries as a direct attack on the police force as the La Mar building is not directly under the control of the police and technically the perpetrators did not overcome police security to get in. However, Charlery sees the burglaries as “a strike right at the heart of law enforcement.”

Investigations into the burglaries are still at the primary stages, according to Charlery, adding that “we are following some leads as to the cause and the perpetrators.”

So what exactly was stolen from the burglarized departments?

Charlery said an undisclosed amount of cash was taken, Monchery put the amount at $300. Both men denied documents were taken from the departments.

“Presently we have not discovered anything untoward in reference to documents or files. Right now we have not ascertained whether any documents were taken, however when the investigations would have ripened we would know exactly if any documents may have been taken,” Charlery said. “We have some very good leads we are following. There are gaps we have to fill. We are looking at every facet of the investigation,” he continued.

Both Monchery and Charlery spoke of beefing up security at the La Mar building.

“As a police agency we have to up our strategies and our reaction to what has happened and to ensure that it is more difficult for the perpetrators to do the same things again,” Charlery said.

“Obviously our security measures for that building were inadequate as a result of what happened. We move on from there, done our assessment and able now to come up with certain measures that would make the break-ins or any future break-ins a bit more challenging for perpetrators,” Charlery added.

The La Mar building was closed on December 24 for the Christmas season and re-opened some two or three days later. It was then that the break-ins were discovered.