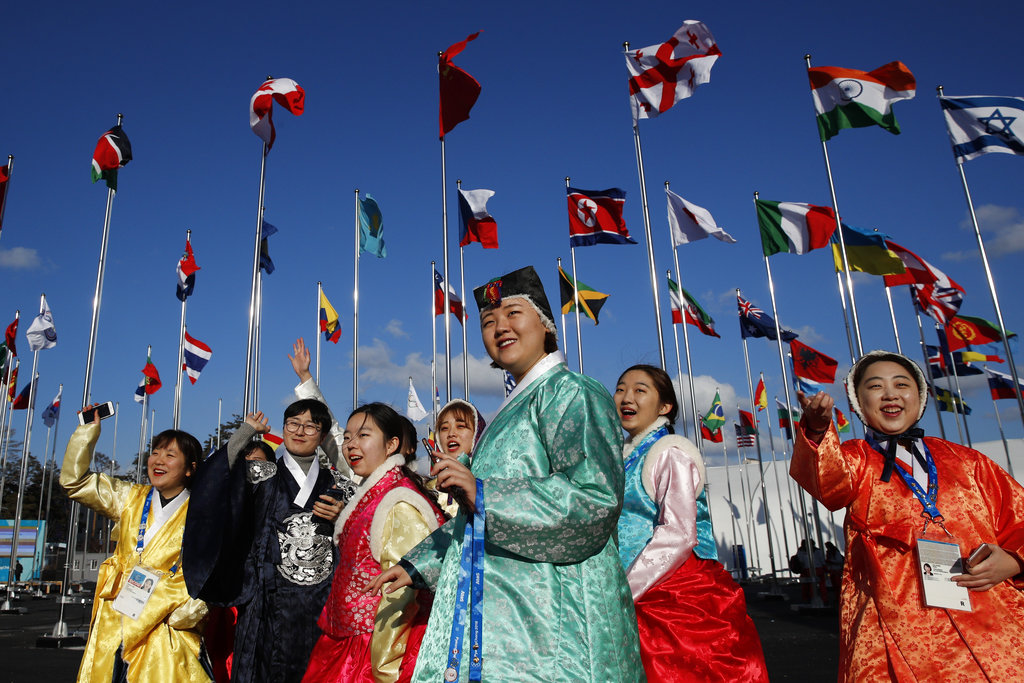 North Korean skiers and skaters arrived Thursday at a South Korean airport to participate in the Winter Olympics that has brought a temporary lull in tensions over their country's nuclear program.

The 32-member delegation led by North Korean Vice Sports Minister Won Kil U includes 10 athletes who were invited to compete in the alpine and cross-country skiing, figure skating and shot-track speed skating events at the Pyeongchang Games.

Greeted by a barrage of camera flashes, the North Koreans — wearing fur hats and black coats — ignored reporters' questions and headed directly to buses parked outside the terminal amid a heavy police presence. They will go straight to the athletes' village in Gangneung.

They were the last group of North Korean athletes to arrive for the Olympics. Twelve compatriots in women's ice hockey have been practicing with their South Korean teammates since last month for the games' only unified team.

The Koreas have been planning several conciliatory gestures during the Olympics, which South Korea sees as an opportunity to revive meaningful communication with North Korea after a period of animosity and diplomatic stalemate over the North's nuclear weapon and missile programs.

South Korea used a rare chartered flight between the countries to fly the North Korean athletes on Thursday. They were accompanied by South Korean non-Olympic skiers who earlier in the day practiced and participated in friendly competitions with North Korean skiers at the North's Masik ski resort at the end of a two-day visit.

"More than anything, it's meaningful that the joint training session at the Masik ski resort was held in the way the South and North had agreed to," said Lee Joo-tae, an official from Seoul's Unification Ministry who accompanied the South Korean delegation. "It's also meaningful that we were able to come back with North Korean athletes on the same plane."

Another rare sight on Thursday was North Korean flags that began flying in Olympic villages and stadiums in Pyeongchang and Gangneung, something that normally wouldn't be tolerated in a country with a strict anti-communist law still in effect.

"If feels amazing (that they are coming)," said Choi So Eun, a college student who volunteered for translation and other work during the Olympics, after taking a selfie with a fellow volunteer under a North Korean flag at the Gangneung athletes' village.

"I thought only high-level officials in South Korea could see a North Korean in person, but I think I can see them here so I'm excited," Choi said.

Another volunteer, Choi Sangyoung, said he hopes the Olympics will help ease animosities between the rivals and lead them in a "peaceful and good" direction.

South Korea is preparing to host hundreds of other North Koreans during the games, including a 230-member cheering group and a 140-strong art troupe that are due to arrive next week. The Koreas have agreed to jointly march under a single "unification" flag during the opening ceremony.

Some outside experts say the North may aim to use improved ties with South Korea as a way to weaken U.S.-led international sanctions.

North Korean flags also flew during the 2014 Incheon Asian Games, the last time the North sent a big delegation to a sporting event across the border.

Pyeongchang, a relatively small ski resort town, will host the ski, snowboard and sliding events during the Olympics. Gangneung, a larger coastal city about an hour's drive away, will host the skating, hockey and curling events.

The Olympics start on February 9.