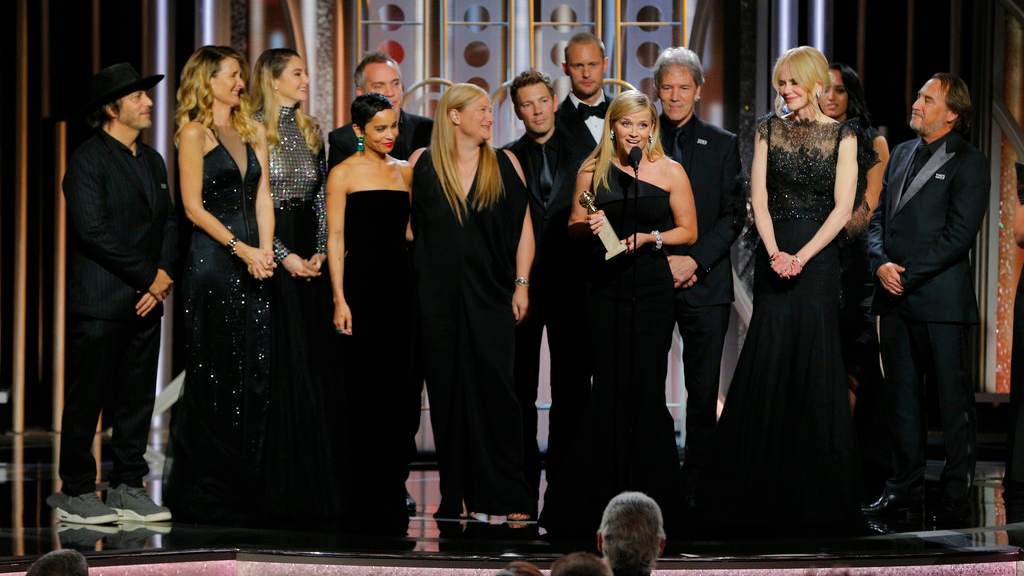 With a red carpet dyed black by actresses dressed in a color-coordinated statement, the Golden Globes were transformed into an A-list expression of female empowerment in the post-Harvey Weinstein era. Oprah Winfrey led the charge.

"For too long women have not been heard or believed if they dared to speak their truth to the power of those men," said Winfrey, accepting the Cecil B. DeMille Award for lifetime achievement. "But their time is up. Their time is up!"

More than any award handed out Sunday at the Beverly Hilton Hotel in Beverly Hills, California, Winfrey's speech, which was greeted by a rousing, ongoing standing ovation, encapsulated the "Me Too" mood at an atypically powerful Golden Globes. The night — usually one reserved for more carefree partying — served as Hollywood's fullest response yet to the sexual harassment scandals that have roiled the film industry and laid bare its gender inequalities.

"A new day is on the horizon!" promised Winfrey, who noted she was the first black woman to be given the honor.

With a cutting stare, presenter Natalie Portman followed Winfrey's speech by introducing, as she said, "the all-male" nominees for best director.

The movie that many believe speaks most directly to the current moment — "Three Billboards Outside Ebbing, Missouri," about a mother avenging the rape and murder of her daughter — emerged as the night's top film. It won best picture, drama, best actress, drama, for Frances McDormand, best supporting actor for Sam Rockwell and best screenplay for writer-director Martin McDonagh.

Accepting her award, McDormand granted she was befuddled at the identities of the Hollywood Foreign Press Association, but gave them credit. "At least they managed to elect a female president," she said. She added that the evening indeed had a special feeling.

"Trust me, the women in this room tonight are not here for the food," said McDormand.

Host Seth Meyers opened the night by diving straight into material about the sex scandals. "Good evening ladies and remaining gentlemen," he began. In punchlines on Weinstein — "the elephant not in the room" — Kevin Spacey and Hollywood's deeper gender biases, Meyers scored laughs throughout the ballroom, and maybe a sense of release.

"For the male nominees in the room tonight, this is the first time in three months it won't be terrifying to hear your name read out loud," said Meyers.

The first award of the night, perhaps fittingly, went to one of Hollywood's most powerful women: Nicole Kidman, for her performance in HBO's "The Big Little Lies," a series she and Reese Witherspoon also produced. Kidman chalked the win up to "the power of women."

"Big Little Lies" won a leading four awards, including best limited series and best supporting actress for Laura Dern. Like seven other female stars, Dern walked the red carpet with a women's rights activist as part of an effort to keep the Globes spotlight trained on sexual harassment. Dern was joined by farmworker advocate Monica Ramirez, Michelle Williams with "Me Too" founder Tarana Burke, and Meryl Streep with domestic worker advocate Ai-jen Poo.

"May we teach all of our children that speaking out without fear of retribution is our new North Star," said Dern, accepting her Globe.

Other winners continued the theme. Amazon's recently debuted "The Marvelous Mrs. Maisel," about a 1950s housewife who takes up stand-up comedy, won best TV series comedy, and best actress for Rachel Brosnahan. Elisabeth Moss, accepting an award for her performance in Hulu's "The Handmaid's Tale," movingly dedicated her award to Margaret Atwood, whose book the show is based on. "The Handmaid's Tale" later added the award for best TV series, drama.

Hollywood's awards season is seen as wide open. And though the Globes have little correlation with the Oscars, a handful of movies came away with big wins.

Notably left empty-handed were Christopher Nolan's "Dunkirk," Jordan Peele's horror sensation "Get Out" and Steven Spielberg's "The Post," starring Tom Hanks and Meryl Streep. At the top of the show, Meyers alluded to Spielberg's film's awards-season bona fides, feigned to present an armful of Globes before the show even started.

The Globes had long been the stomping grounds of disgraced mogul Weinstein, whose downfall precipitated allegations against James Toback, Spacey and many others. Weinstein presided over two decades of Globes winners and was well-known for his savvy manipulation of the 89-member press association.

Though it bills itself as Hollywood's biggest party, the Golden Globes struck a slightly more formal, Oscar-like tone, complete with moments of appreciation for movie legends. Kirk Douglas, 101, appearing with his daughter-in-law, Catherin Zeta-Jones, received a warm standing ovation.

Best actor in a comedy or musical went to James Franco for his performance as the infamous "The Room" filmmaker Tommy Wiseau. Franco dragged his co-star and brother, Dave, to the stage and called up Wiseau. When the Wiseau, wearing his trademark sunglasses, got to the stage, he moved for the microphone before Franco turned him back. "Whoa, whoa, whoa," said Franco as the audience chuckled.

Gary Oldman, considered by some to be the best actor front runner, won for his Winston Churchill in "Darkest Hour," edging out newcomer Timothee Chalamet ("Call Me By Your Name") and Hanks.

Best foreign language film went to Germany's "In the Fade." Allison Janney took best supporting actress in a comedy for the Tonya Harding tale "I, Tonya." Aziz Ansari took best actor in a comedy series for his Netflix show "Master of None."

Best animated film went to the Pixar release "Coco." Pixar co-founder John Lasseter is taking a "six-month sabbatical" after acknowledging "missteps" in his workplace behavior. Backstage, "Coco" director Lee Unkrich was asked about changes at Pixar. "We can all be better," he said. "We have been taking steps and continue to move forward to create art."

Sunday night's black-clad demonstration was promoted by the recently formed Time's Up: an initiative of hundreds of women in the entertainment industry —including Streep, Williams, Dern and Winfrey — who have banded together to advocate for gender parity in executive ranks and provide legal defense aid for sexual harassment victims.

Ashley Judd, the first big name to go on record with her Weinstein experience, and Salma Hayek, who last month penned an op-ed about her nightmare with Weinstein, arrived together.

Just about everyone, woman and man, celebrity and red-carpet reporter, was dressed in black, many of them wearing a Time's Up pin. "This Is Us" star Chris Sullivan even sported black fingernails. Later, his co-star Sterling K. Brown won for best drama actor. Brown, the first black man to win the category, thanked "This Is Us" creator Dan Fogelman.

"You wrote a role for a black man that can only be played by a black man," said Brown. "I'm being seen for who I am."

Though the atmosphere was still buoyant and positive, the usually superficial red carpet had unusual exchanges. While being interviewed live on E!, Debra Messing called out the network for allegedly not paying its female hosts the same as its male hosts. E!'s Catt Sadler recently departed after she said she learned she was making about half the pay of her male counterpart, Jason Kennedy.

It was just another illustration of how the "MeToo" reckoning that has plowed through Hollywood has upended awards season. Among the nominees Sunday was Christopher Plummer, who was brought in at the last minute to erase Spacey from "All the Money in the World."

But the night belonged to women. Even Geena Davis and Susan Sarandon, marking the 25th anniversary of "Thelma & Louise," were brought in as much-cheered presenters.

Said Davis with thick irony: "They love that we fixed everything."

Men? A sideshow at a Golden Globes that celebrated women