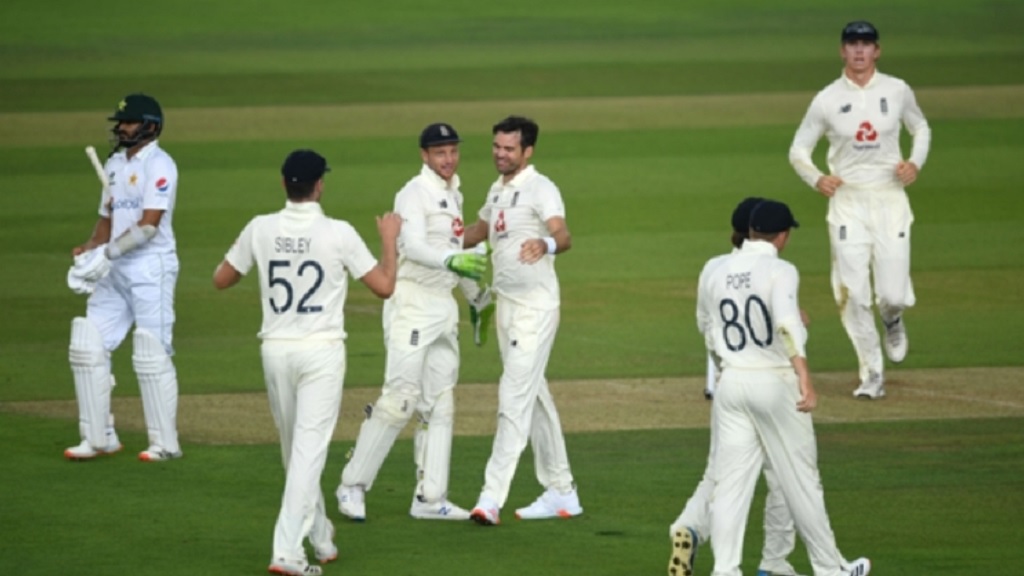 England players celebrate the fall of a wicket.

England had the better of a weather-affected first day of the second Test against Pakistan as the tourists were limited to 126-5 at the Rose Bowl.

In stormy conditions in humid Hampshire, Pakistan won the toss and elected to bat, but James Anderson (2-35) struck early to dismiss Shan Masood for only one.

Dom Sibley and Rory Burns dropped catches as Abid Ali (60) and Azhar Ali (20) took Pakistan to 78-1, though the captain then fell to Anderson - who this week denied talk that he could be set to retire.

England did further damage in between rain breaks – Sam Curran, Stuart Broad and Chris Woakes striking before play was finally ended by bad light with only 45.4 overs possible.

Questions were asked over Anderson's place in the side following a disappointing showing in England's stunning victory at Old Trafford, but England's record Test wicket-taker soon let his class do the talking, swinging a brilliant delivery straight into Masood's pads.

Abid should have been dismissed in the next over, only for Sibley to put him down after Broad drew an edge.

Azhar's luck was in when the ball trickled back and hit the stumps without dislodging the bails, before Burns dropped Abid at second slip as Pakistan made it to an early, rain-enforced lunch without suffering further damage.

Pakistan's luck ran out shortly after the restart – the probing Anderson drawing an edge from Azhar, with Burns holding on this time.

Another rain break followed, with dark skies forcing tea to be taken early, but Pakistan resumed brightly – Abid passing 50 in nervy fashion with a thin edge which scuttled between fielders.

Successive fours took Pakistan beyond 100, yet Abid was soon on his way back to the pavilion when he nicked a delivery from Curran to Burns.

Sibley then took a low catch to send Asad Shafiq (5) walking, before Fawad Alam – making his first Test appearance since 2009 – was trapped lbw by Woakes, with England successfully reviewing before the weather closed in to halt the day's play.