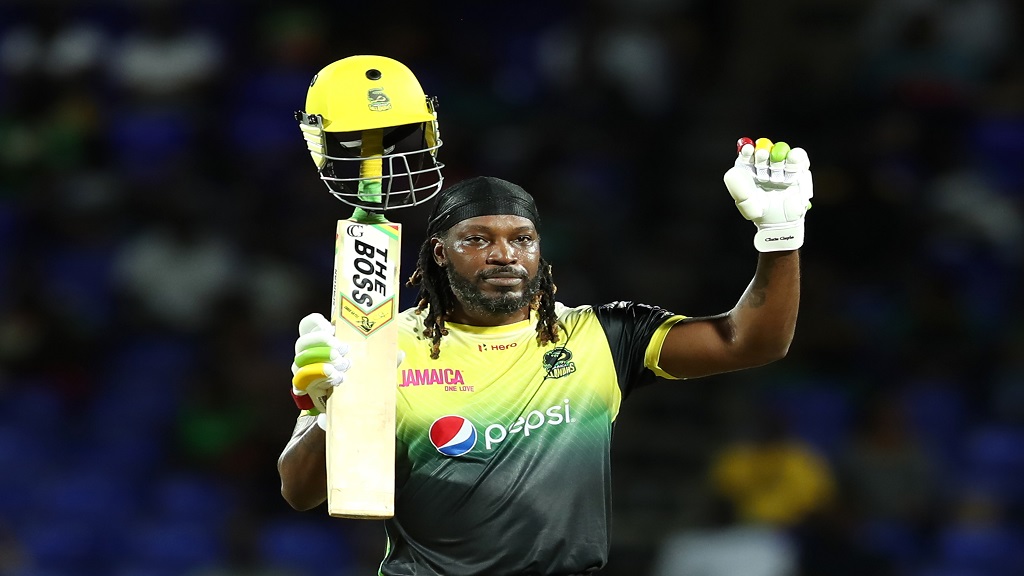 St Kitts & Nevis Patriots produced the most astonishing Hero Caribbean Premier League (CPL) victory as they chased down Jamaica Tallawahs’ 241 for four on a night when sixes flew and records tumbled at Warner Park.

The Tallawahs appeared home at the halfway stage on Tuesday night after Chris Gayle had returned to torment the side he had led for the previous two seasons. The 39-year-old smashed 116 from 62 balls with 10 sixes to register his 22nd T20 century, sharing a Hero CPL record partnership of 162 with Chadwick Walton – who kept pace with Gayle in his own 36-ball innings of 73 – to propel the Tallawahs to the highest total in the history of the tournament. 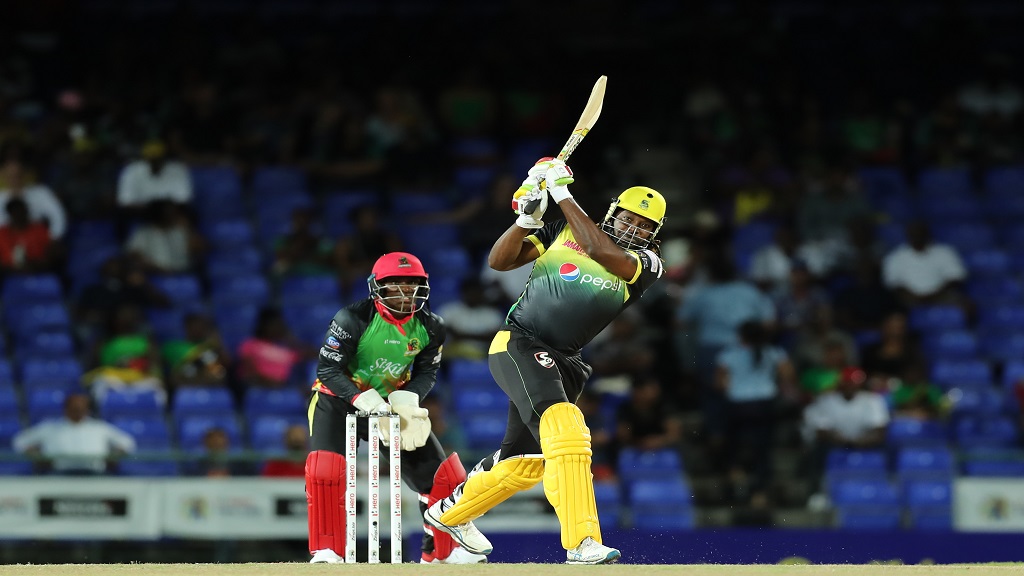 It was a record that would stand for only two hours as the Patriots reached 242 for six with seven balls to spare. The sixes just kept flying, the records just kept tumbling. Evin Lewis hit six Hero Maximums and three fours as he blitzed his way to 50 in just 17 balls – another Hero CPL record – and took the Patriots to 85 without loss inside the Power Play before he was surprised by extra bounce and caught behind by Glenn Phillips off Andre Russell.

But he had shown the way, and his team-mates followed his lead.

Devon Thomas made his way to 50 off 30 balls and new arrival Laurie Evans from England gave an immediate display of his class as spin and seam alike disappeared to all parts of Warner Park. 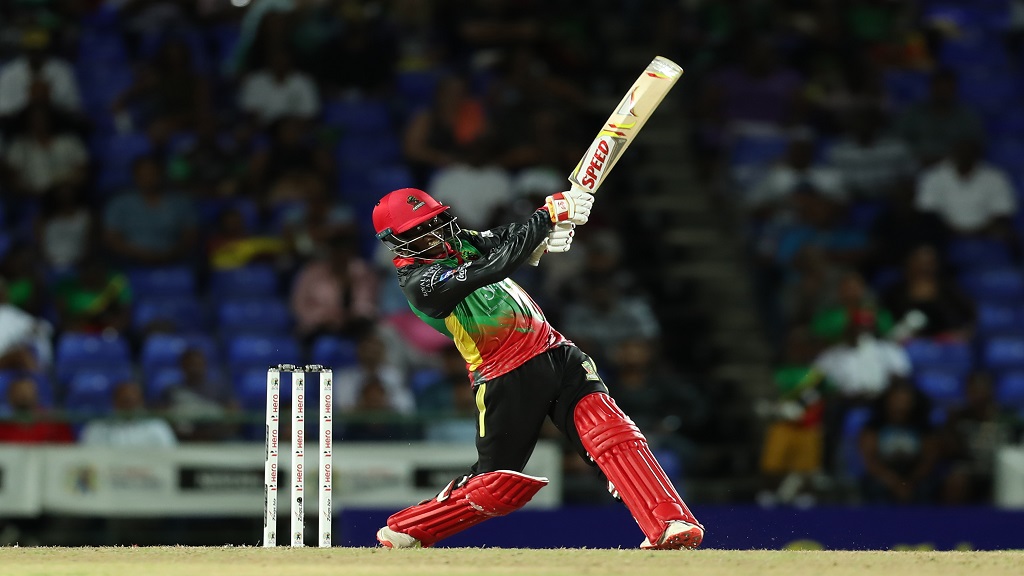 Evans’ third Hero Maximum meant that, remarkably, the Patriots were well on course for victory at halfway with 133 for one on the board and only another 108 required.

But Evans fell in the 12th over, caught by Russell at deep point off Oshane Thomas for 41. When Phillips flung himself to his right to take a stunning one-handed catch to dismiss Devon Thomas at the start of Oshane Thomas’ next over things appeared to be unravelling and it looked like the Patriots’ brave and brilliant bid for victory would come up short. Carlos Brathwaite and Jason Mohammed fell in the same over without scoring.

Still, the Patriots kept coming, though. Shamarh Brooks joined Fabian Allen and immediately smashed his first Hero Maximum and the game’s 35th – yes, that’s another record. The next ball was slammed over mid-off and the Patriots found themselves needing just 43 from 24 balls.

Allen brought up the 200 with the biggest six of all, waiting on a Jerome Taylor slower ball and sending it miles over long-on and out of the stadium. A four down the ground for Brooks took the required rate down to below 10 an over from the last 18 balls. 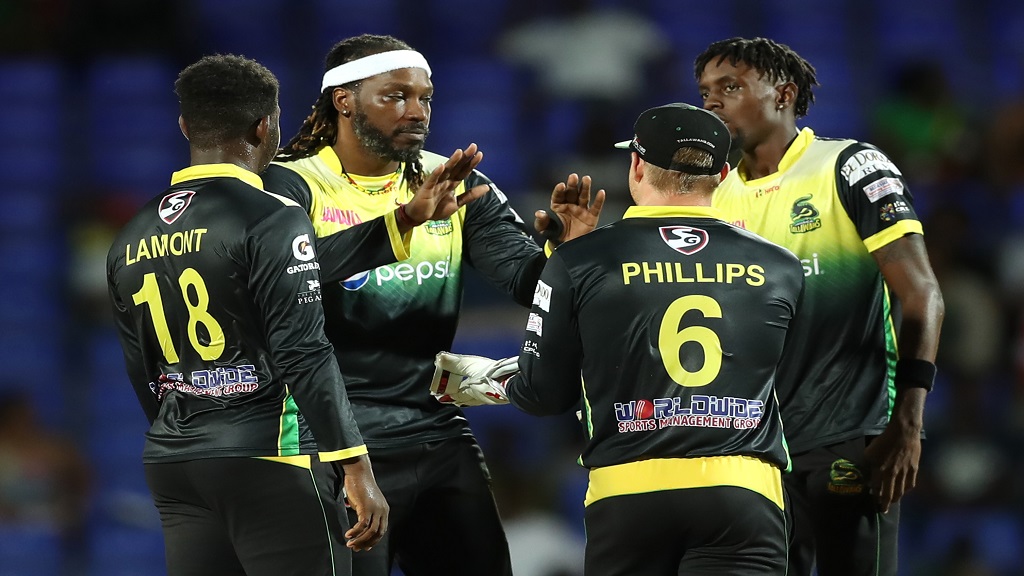 Shamar Springer started the crucial 18th over with a nervous-looking wide and was hit through midwicket for four by Brooks before a couple of scampered twos and a single kept things on track. Allen then steered the final ball of the over past short third-man. Suddenly, the Patriots needed just 15 from 12.

Another twist in this extraordinary spectacle seemed possible when Russell cleaned up Brooks for 27 at the start of the 19th over, but Allen was having absolutely none of it. A scampered leg-bye got him back on strike, and he smashed the last 14 runs required from the next three balls to complete a thrilling win.

The Patriots had not just chased down the highest total ever made in the Hero CPL, but had done so with more than an over to spare.

It had all looked so very unlikely when Gayle was dominating the first half of the night.

He made his intentions clear from the very first over when he dispatched Allen’s left-arm spin for four through square-leg and then huge Hero Maximums over long-on and midwicket in successive balls.

Alzarri Joseph dismissed the dangerous Phillips – who made a century against the Patriots last season – for just eight but Gayle was not about to be stopped.

Back-to-back boundaries off Rayad Emrit propelled Gayle into the 30s and he found a willing ally in Walton.

Having not scored from the first six balls he faced, Walton then took just a further nine deliveries to reach 30 and got to 50 off 25 in all. A Gordon Greenidge-style pull shot off Dominic Drakes getting him off the mark with a Hero Maximum; the next ball was pumped down the ground for a one-bounce four.

Usama Mir’s first over was pulverized. A sweep shot brought Walton four before back-to-back big hits down the ground for six, the first of them landing on the roof of Warner Park.

The 50 partnership came up in 39 balls before another big over off Usama. First Walton and then Gayle cleared long-on to take the Tallawahs to three figures and leave the leg-spinner nursing figures of 0/33 from two overs.

Walton won the race to 50 despite giving Gayle a three-over headstart and failing to score from his first six balls faced. Inevitably, he got there with a Hero Maximum, carved over third-man. Gayle was not far behind, pumping Joseph down the ground to reach a double landmark. Not only did it take him to 53 from 37 balls, but it was also the 150th Hero Maximum of the Universe Boss’ Hero CPL career. No other player has yet reached 100.

Walton was for now winning the six-hitting race here, though, adding his seventh of the innings in the same Brathwaite over to dent the Patriots skipper’s figures.

And still, the sixes kept coming. Gayle smashed three more from Emrit’s third over, and Walton added his eighth with a scoop over fine-leg off Drakes.

Gayle brought up the 150 partnership with three sixes in a row to start Brathwaite’s fourth and final over. Thoughts of six sixes in an over ended with a single from the fourth ball but Brathwaite, having conceded just six runs in his first two overs, still ended with the bruising figures of 0/42.

Gayle got through to his hundred after a nervous wait while the third umpire checked Walton had completed the second run needed to get Gayle from 98 to 100. The not out verdict confirmed Gayle’s 22nd T20 century, almost three times as many as any other player.

Walton’s reprieve was short-lived, though, well caught by Brathwaite after skying one off Joseph. Relief for the Patriots – until they saw Russell walk to the crease.

Gayle was still the main man, though. He picked up three successive fours off Joseph, the third of which had Russell taking desperate evasive action as the ball whistled past him at the non-striker’s end.

Russell himself launched a couple of sixes of his own before he, like Gayle, departed in the final over – both caught by Brathwaite, who caught all four Tallawahs batsman to fall – as Allen got a measure of revenge.

There was time for one last big hit in the innings as Springer walked in to face the final ball and sent it sailing over the ropes to take the score beyond 240. Remarkably, it would not be nearly enough.