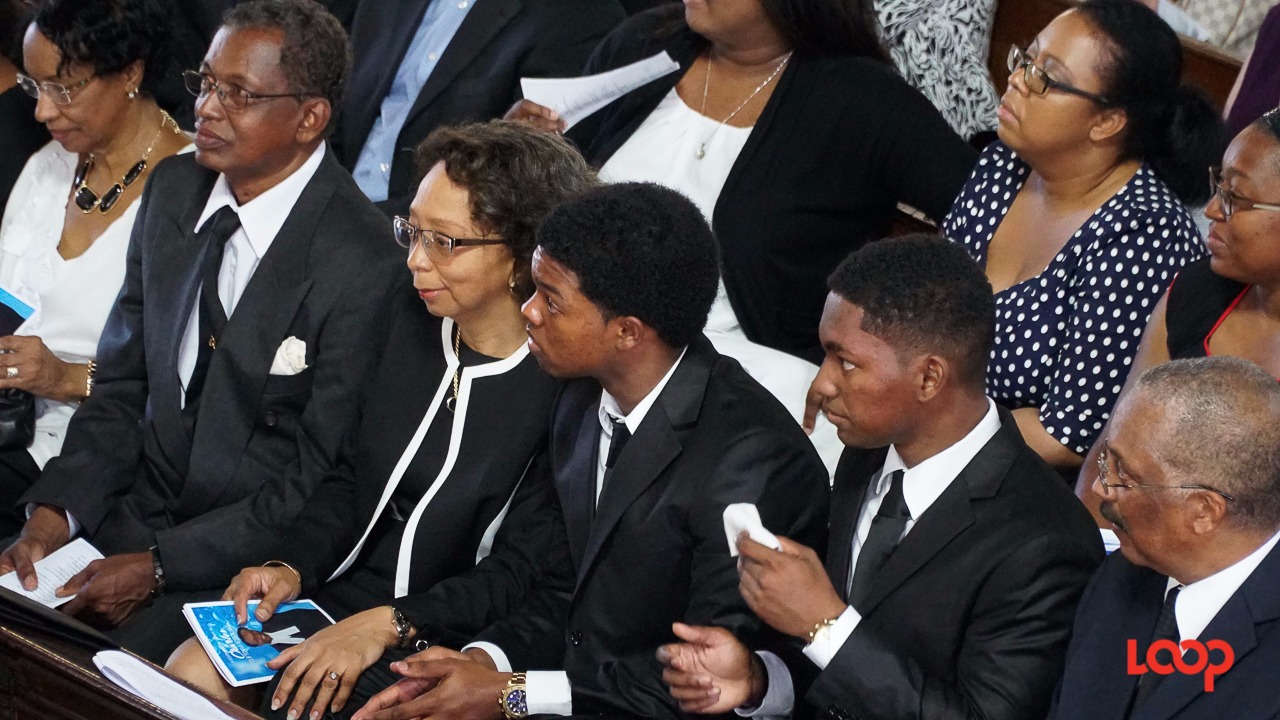 Charles Leacock Q.C. may no longer be present with us, but his sons will continue in his footsteps one way or the other.

A family man, a man of God, a father, friendly neighbour and fierce prosecutor, Director of Public Prosecutions Charles Leacock Q.C. was eulogized and his life was celebrated during an almost two-hour long funeral service.

“He was a devoted and loving husband to his wife, Elisabeth “Betty June” Leacock nee Austin, whom he met while studying at UWI, Cave Hill; and a doting father to his two sons, Donald, a student of accountancy in Florida, following in his mother’s footsteps and Brian, a law student at UWI, Cave Hill, treading in the steps of his illustrious father.  Both sons have taken up his love of golf!”

Sir Marston called the late DPP, who was appointed at the age of 39 to said post in March 1997, “no shrinking violet”, “a minister of justice”, one who relished a good legal battle, had a “surefootedness... And like all lawyers, he liked to win.  His resolute approach to his cases could, on occasion, appear to be disrespectful… Charles Leacock was always well-prepared and very helpful in the areas of reform of the criminal justice system.”

While his son Donald who read the family reflection and spoke on behalf of himself and his brother. He said that there was not one thing that he did not do for them to ensure they achieved success, and he called their father “our greatest role model”. He said that their father did everything for them and through his life, "he did it all from scratch and without parents", just with his older brother Cyril Leacock. Thanking his uncle for his commitment to his dad, he spoke of a lifetime of dedication that Charles Leacock never forgot.

Now as Sir Marston said, Donald walks the same path as their mother and his brother Brian is the young budding lawyer.

Beyond his family missing him and feeling his loss, the Chief Justice added, “The Judiciary of Barbados, and the entire Justice System are all diminished by his loss and the void created by his passing will never be filled.”

Beyond being a loss to his family and the legal fraternity, Canon Noel Burke who delivered the sermon, told the congregation which packed the downstairs section of the Cathedral Church of St, Michael and All Angels in Bridgetown, that as the Diocesan Chancellor of the Anglican Diocese of Barbados for 16 years before becoming the Provincial Chancellor of the Anglican Church of the Province of the West Indies in 2013, Leacock made tremendous headway in dispatching with many of the cases that the church had before the courts. Canon Burke said that he had intellect, prowess and a wealth knowledge, so much so that “he always had an opinion” because of his extensive reading and researching.

Canon Burke said that unlike many, Charles Leacock Q.C. “combined law and religion” in an unmatched way. “He was passionate about everything.”

The Canon said, “He is an example for all of us in society… He was a man who worked, loved God, loved his family and served humanity”. The late DPP and his family were parishioners at St. David's Anglican Church and Canon Burke is the St. David's rector.

Leacock's son Donald closed his reflections by pledging that because his father built his legacy against all odds, “I know that he raised us [me and my brother] and equipped us with the tools necessary to continue his legacy forever.”

In the church today were many who faced the late DPP across the floor of the court and lost to him on memorable occasions, including the now Prime Minister of Barbados, the Rt. Hon. Freundel J. Stuart and the now Minister of Transport Michael Lashley. Also in attendance were the Attorney General Adriel Brathwaite, the Acting Assistant Commissioner Erwin Boyce, Minister Stephen Lashley, the U.S. Ambassador to Barbados and the Eastern Caribbean, members of the Senate, parliamentarians, Cabinet members, other dignitaries and members of the diplomatic corps.

The DPP passed away in Florida on July 9, 2017. His funeral service was followed by a private cremation.

Bar pays tribute to DPP ahead of funeral service