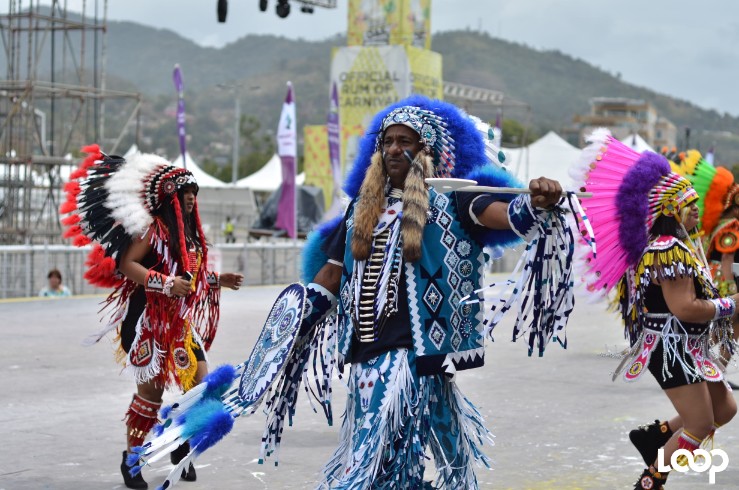 Minstrels, Native Americans, Moko Jumbies and more were on display during Trinidad and Tobago's traditional mas display on Carnival Monday.

One of the well-known traditional characters is the Midnight Robber, a character based on the American Wild West, inclusive of an oversize cowboy hat with fringed brim.

The Robber usually has a flowing cape adorned with symbols of death, a black satin shirt, black pantaloons, and black shoes/boots. However, modern interpretations can see the Robber in a variety of colours outside of the traditional black.

His unique speeches, called “Robber Talk”, are haughty invocations with origins from a variety of sources, including the Bible and other pieces of classical literature, like Shakespeare. The Robber is also known for his trademark whistle that he blows before he addresses his audience. Often the Robber will have a prop gun, sword or dagger and a wooden money box in the shape of a coffin with which he will “threaten” his audience.

The Moko Jumbie derives its name from West African tradition. The “Moko” is an Orisha (God) of Retribution. The term “Jumbie” was added post-slavery. The Moko Jumbie was regarded as a protector whose towering height made it easier to see evil before ordinary men.

As a masquerade, these characters make long strides balanced on stilts that can be from 10 to 15 feet in height. In the past, the Moko Jumbie was sometimes accompanied by a dwarf in similar costume but without stilts, to accentuate Moko's height. He danced all day through the streets, collecting money on a plate from the people crowded on the second-floor windows and balconies. Often the stilts are painted in stripes or decorated with coloured fabric. The Moko Jumbie is usually dressed in brightly coloured costume that consists of long pants or skirts and a simple shirt. The Moko Jumbie may also wear a hat.