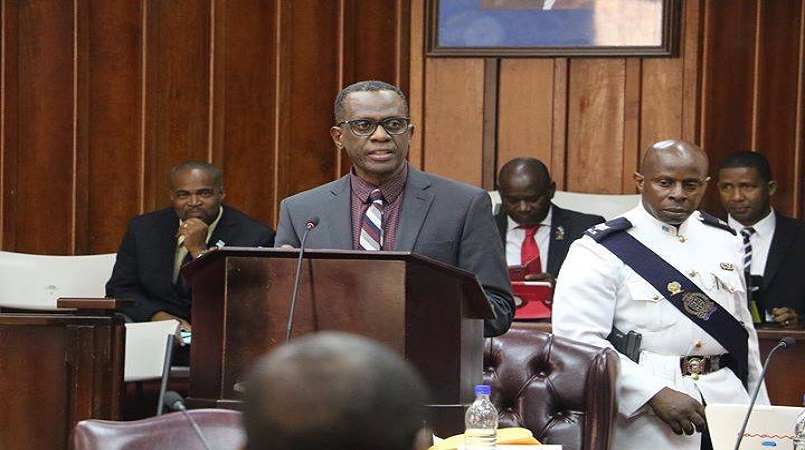 Opposition leader Philip J Pierre wants Prime Minister Allen Chastanet to involve the police in any investigation he may launch into a letter purportedly bearing the signature of a government minister, which he says could destroy Saint Lucia’s name.

Pierre made the announcement late yesterday afternoon during his rebuttal in parliament to the 2019/2020 Budget Address delivered by Prime Minister Allen Chastanet on Monday.

About two weeks ago, Pierre held a press conference in which he demanded that government comment on the authenticity of the letter.

That letter had the apparent signature of Economic Affairs Minister Guy Joseph attached. Joseph appeared on the television talk show hosted by Rick Wayne two days later and did not categorically deny that the signature was his own. Pierre at the time said the letter was highly irregular and presented a high risk of damaging the image of Saint Lucia.

Pierre in his rebuttal said there is an absence of good governance and that corruption is alive and well in government.

“Good governance is also about a prime minister exercising leadership by disciplining his ministers when their behaviour is in contravention of the ministerial code of behaviour,” Pierre said.

The opposition leader then brought up accusations levelled at the sitting member of the Cabinet of Ministers, saying that the prime minister continues to fail the people of Saint Lucia by refusing to act when he should in the face of the accusations against his minister.

“This cabinet member has been publicly accused of offering bribes to a former prime minister and cabinet member in the 2006-2011 UWP administration. More disturbing, the accused minister has made no effort to protect his name. There can only be two interpretations to the accused minister’s inaction: he either does not care about his public image, which is a worrying sign as a public officer, or he is guilty of the accusation of bribery. The significance of the accusation remains lost on the prime minister and so he has not done anything about it. Not even the fact that the accusation was made by a former cabinet colleague seems to move the prime minister,” Pierre said.

Pierre went on to say that the prime minister’s indifference to matters concerning the behaviour of his cabinet ministers is sending a clear signal to the population: he just does not care. And so, there is a situation where certain ministers have become emboldened, and are now, more and more, engaged in activities that are unbecoming of any public official.

“This government has wasted precious time in parliament and beyond to blame the opposition, denials even with obvious evidence, making excuses.  They have engaged highly paid tax-funded spin doctors to deflect, blame, threaten and intimidate perceived political opponents. There can be no meaningful economic prosperity for all in that environment,” Pierre said.

He then put Speaker of the House Andy Daniel on the spot asking him to put himself in a certain position. “If your signature were attached to a letter you did not sign, and you were then asked about the letter, would you defend its contents? I think not and you would dismiss the letter as a forgery and perhaps call in the police, in an attempt to protect your reputation and good name,” Pierre said.

“Mr Speaker, it would be irresponsible and reckless of any minister, including the Prime Minister, to commit to anyone, the payment of a loan by the government of St Lucia, which has not been tabled in this house for debate, let alone agreed. Yet, the minister in question has chosen to defend the contents of the letter, and he has accepted the signature on the letter as being his. He has not suggested forgery and nor has he been clear that the letter was not written by him,” Pierre said.

According to Pierre the prime minister is aware of the letter and has remained mute about it demonstrating an indifference by his silence, or at the very least, to any likely wrongdoing on the part of his ministers.

“There is a notable awareness of the seriousness of the matter though, within his government, by the last UWP prime minister and member for Castries North. In his answer to questions from the press about the said letter, which was written on the official letterhead of government from the Ministry of Economic Development, he (member for Castries North) agreed that if the letter were authentic then the minister should be disciplined because he would have been in breach of the ministerial code of conduct,” Pierre said.

“Mr. Speaker, I am calling on the prime minister, given the defence of the letter’s contents by the minister in question and the recognition by a senior member in his cabinet of the seriousness and damaging nature of the letter, that he tells the house and the people of St Lucia what he intends to do about the situation? In the spirit of transparency and good governance that, if, he, the prime minister, intends to commence an investigation into the matter that the police be included to address any likelihood of forgery,” Pierre said.