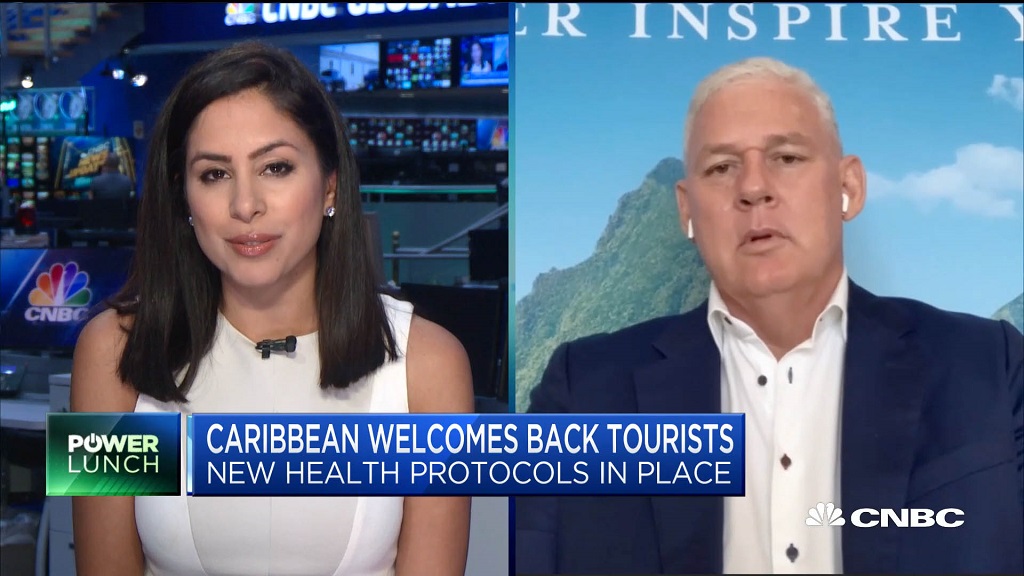 In an interview this week with CNBC, the world leader in business news, Prime Minister of Saint Lucia, Honourable Allen Chastanet, discussed the Caribbean’s response to COVID-19, protocols to guide the reopening of the travel industry and Saint Lucia’s successes in managing the pandemic.

Prime Minister Chastanet applauded the region for its general quick response to the pandemic, the management of the pandemic so far and spoke about the success of the pre-testing requirement for travelers to Saint Lucia and the partnerships which needed to be developed within the travel industry to curtail the spread.

“We believe we have found the right balance between opening up the doors while at the same time protecting the safety of the guests who are coming as well as our nationals in our country,” Prime Minister Chastanet said while listing the activities allowed under phase one of Saint Lucia’s reopening of travel.

Prime Minister Chastanet has been an advocate for increased responsibility by the airline companies in screening of travelers amidst the pandemic. In a quote in the New York Times, Saint Lucia’s Prime Minister urged airlines to push for the development and implementation of rapid preboarding airport testing for all passengers.

“You have to have testing sites, the way you have a Dunkin’ Donuts kiosk in every airport,” he said. “The airlines in many ways acted like they had ostrich syndrome, and said it is somebody else’s problem, but ultimately it is their problem. They have to use their advocacy strength to make it happen.”

In the CNBC interview, the Prime Minister, who has been the lead in the OECS on travel protocols, explained that the Caribbean is in discussions with airline industry partners because “pre-testing is a formula that works.” Pre-testing being more readily available, noted the Prime Minister, “certainly solves a lot of problems for everyone.”

On August 7, the Prime Minister also had a discussion with Cheddar, a leading live streaming financial news network, on Saint Lucia’s early action against coronavirus and the protocols adopted in order to reopen its borders for tourism.

Prime Minister Chastanet has also spoken extensively about the economic impact of the pandemic on the Caribbean and local efforts to stimulate Saint Lucia’s economy.

Saint Lucia has recorded a total of 25 COVID-19 cases to date, all of which have now recovered fully, giving the country a 100 percent recovery rate and zero COVID-19 related deaths.

8 islands join forces to woo travellers to their markets