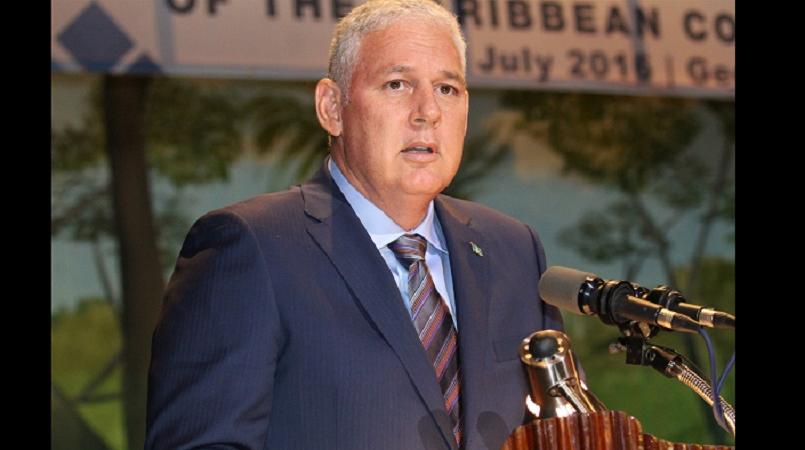 Prime Minister of St Lucia and Chairman of the Organisation of Eastern Caribbean States Authority, Allen Chastanet was a guest earlier today on American network CNBC’s Squawk Box, where he spoke about rebuilding after the devastating storms that have impacted the region.

Chastanet spoke of what he had seen on his visits to various affected countries saying, “It’s obviously very, very bad. Obviously a lot of infrastructural damage but I think it’s important to put that in context, this is not the first time this has happened in the Caribbean. I mean we had Hurricane Ivan back in 2004, literally devastated the economies of Grenada and Cayman and both of them have bounced back. St Lucia in 2010, Hurricane Tomas was very damaging and we’ve bounced back, so the resilience of the Caribbean is extremely strong and that we are brothers and sisters, so whereas there may be other events taking place around the world and priority may not be on us, we have always bound together to make this thing happen.”

Asked about what kind of attention the Caribbean has seen in a landscape where storms have affected the US and deadly earthquakes have struck Mexico, Chastanet said, “Well because of the dependents being impacted so severely, the US were very quick to respond in St Thomas and St John’s; the British were down in Anguilla and the British Virgin Islands, though most people would say that recovery has been very slow; and then you obviously had the French and the Dutch being preoccupied in Saint Martin, so people like the Florida Caribbean Cruise Association, that is Carnival and Royal Caribbean, have been extremely responsive. The Venezuelan government also have been extremely responsive because the support has had to come from the south because you know while we’re going through this, you had two hurricanes heading up north, literally Miami was on a shutdown so, unfortunately American hub got shut down almost for ten days out of Miami, so it really has shown us the need to diversify ourselves a bit and maybe look more to Panama in terms of supplies of food because the Caribbean is one of the few regions in the world in which the US has a trade surplus…”

Chastanet was asked about insurance and whether there should be a private market solution to such storms. He responded that he thought it was a good idea but that in order for it to take place, the region must first get beyond a state where storms take islands down to zero. He said that mitigation, which is the reduction of carbon emissions, and adaptation, which is physically building the infrastructure to cope with these storms, are the two approaches in play.

Chastanet advocated for a reclassification of Caribbean states by the IMF and World Bank. He said at present that many were classified as middle-income countries based on GDP per capita. He argues that classification as lesser developed countries would free up access to concessional funds and low-interest rates instead of commercial rates.

Chastanet also advocated for a new trade mechanism between the US and the Caribbean. The US has a trade surplus of 5.3 billion with the region and as such Chastanet believes there is an opportunity for development. He asked, “can we not get an incentive, and that’s what we’re in discussions with the US about, that if US companies invest into the Caribbean, that those investments in our books are always tax-free, that the US allows those funds to be repatriated back into the US tax free, only on those investments.” He believes this would have a long-lasting stabilizing effect by attracting private sector investment, bringing a lot of money to the table.

OECS Member States Rally Together in the Wake of Hurricane Irma

10 alarming facts about the 2020 hurricane season