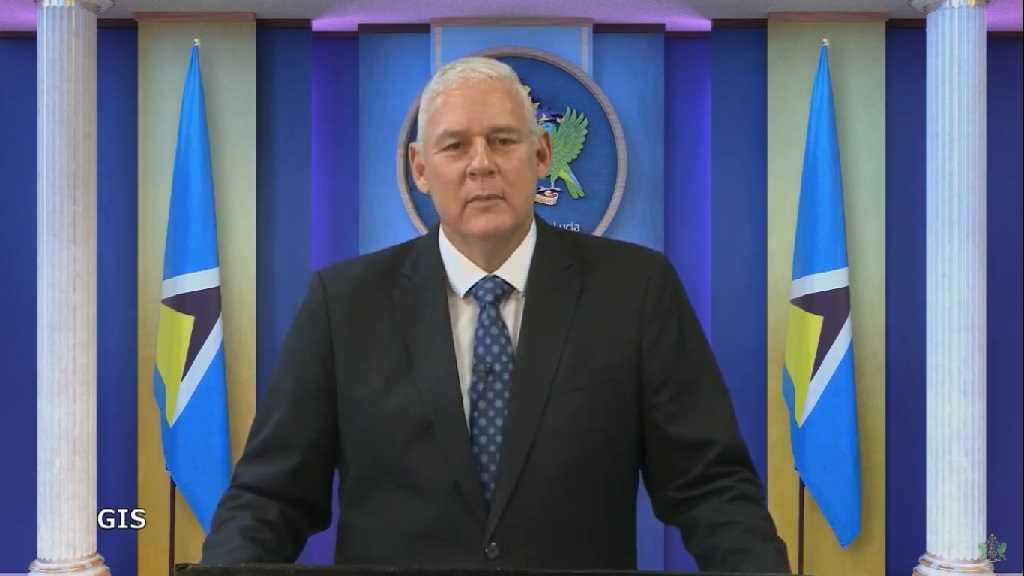 During Prime Minister Allen Chastanet's Address to the Nation on Sunday, April 26, 2020, he addressed in detail the reasoning behind government's proposal to pay some civil servants partially in bonds.

That team has to date held five meetings with the public sector trade unions and engagements with key stakeholders during the months of March and April and presented an overview of the economic and financial impact of COVID on our island.  The next meeting is scheduled for Tuesday.  We also formed a sub-committee to manage the economic and social fallout comprising myself as the Minister of Finance, and the Ministers of Tourism, Education, Economic Development and Agriculture.

I want to thank our private sector partners and the trade unions for their participation and for their admitted appreciation of the gravity of the economic hurricane which has just hit us.  We must work together to ensure the survival of our country.  The need to negotiate with the civil service has not arisen because their work and contributions are not valued. In fact, at these times, they have shown us how invaluable they are, especially our frontliners. At the same time, there must be a recognition that our financial situation – and that of the whole world – has changed overnight and an urgent but temporary adjustment is required.

And as we continue our negotiations with the civil service, we will at all times, deal openly and honestly but we will expect the same in return. When we review the revenues for April dating back to 2017, the drop is quite alarming. In April 2017 we collected 70 million. In 2018 we collected 87 million. In 2019 it was 101 million. And for this April to date we have only collected 40 million.

As civil servants all know, their salaries are paid from monthly Government revenues and as I mentioned the drastic drop – a 60% reduction for April alone – has put a severe strain on our cash flow and immediate options to replace this revenue are limited. We are projecting that this new level will continue at least until July and it is very difficult to determine how long until we get back to pre-Covid-19 levels.

Being aware that the frontline workers were exposed we looked at the possibility of making an exception. However, we realized that there were other public officers who were also at work: customs, the staff at the Government printery, our teachers, our ministry of finance staff and many more have been working long hours during this crisis.

While most people are not on the front lines, they are also at risk each day. If Government is left to make that determination it becomes a difficult choice to make. This is one of the reasons we have sought to seek the counsel of the unions in making the decisions as to the best approach. 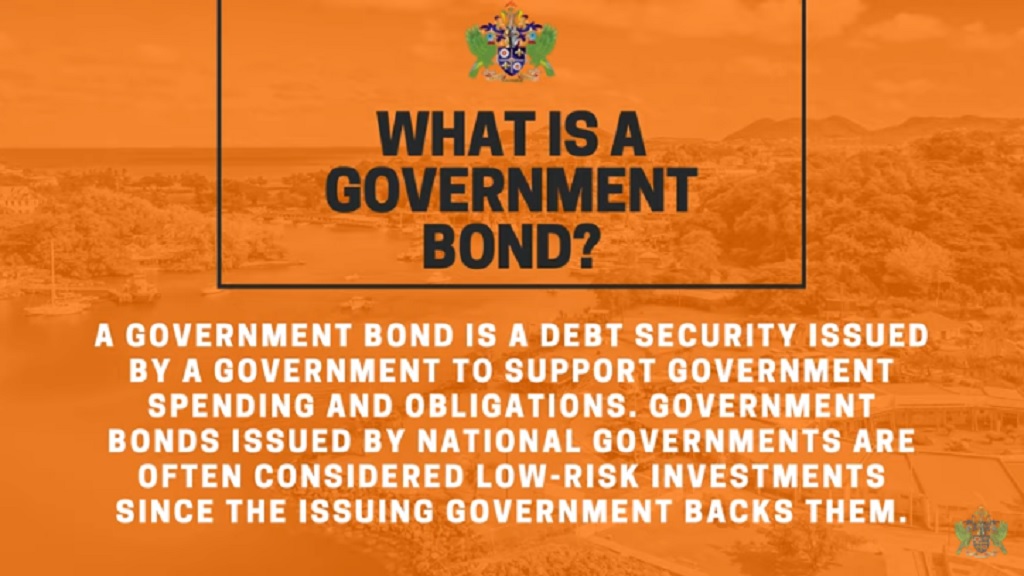 Those at grades 7-21 have been offered part cash and part interest-bearing wage bonds for a three-month period.  But everyone will be paid in full.  A wage bond is similar to a fixed deposit redeemable after a year at a fixed interest rate of 3%, which is one percent above the current savings rate.

This offer, if accepted, will allow us to keep some cash on hand to pay debt and to cover other emergency expenses.  The end of March represents the end of Government’s financial year and when we were expecting a windfall from income tax payments, not only have we been unable to receive these but we have had massive unexpected expenditure due to COVID-19.  We can’t afford to default on our loan obligations because the repercussions for our country will be severe and on all us.

COVID-19 has dealt us a difficult hand and we are doing the best that we can to get through this.  All we are asking for is a little time – 3 months.

To put things into perspective:

Before COVID-19, estimates by the Department of Finance for the next fiscal year had projected 4% economic growth.  This would have capped off almost four years of consecutive growth since we assumed office in June 2016.  In fact, next week we will be announcing that we have achieved not only another year of economic growth but our debt to GDP has now declined to 59%.  This means that our economy has been growing faster than our debt for the first time in almost 20 years.

We are also very proud of the fact that our policies and initiatives have resulted in a dramatic reduction in unemployment from 25% when we took office to 16.8%. Youth employment continued to decline falling to the lowest ever recorded to 31.6% So we have been able to consistently grow the economy and improve overall output which has put us in a better position to deal with this economic crisis.  Despite the current difficulties, our improved economy has undoubtedly made us more resilient.

In fact, we were on the verge of a major take-off when COVID hit and the numbers are there to substantiate this. It is as a result of our pre-COVID growth and reduced debt to GDP ratio that we are now able to more easily negotiate with regional and international institutions to get the financial assistance that we need.  We have been in discussions with ECCB, IMF, World Bank, Caribbean Development Bank (CDB) and other bilateral partners to repurpose existing loans in some instances and to extend new financing facilities.  But these loans take time to negotiate which is why we are asking for the understanding of our unions.

The global uncertainty as to when the world will recover, means that every country including Saint Lucia will contract for a period of time.  The ECCB suggests that Saint Lucia’s contraction could reach 18%.  This contraction if it occurs, will result in a possible doubling of our fiscal deficit for the upcoming financial year.

In order for us to survive, managing incoming cash flow over the next two to three months is essential.

The Department of Finance will need to undertake the following:

• Assist statutory bodies by way of cash injections, primarily for salaries and wages.

• Meet the costs associated with the treatment and containment of COVID-19.

• Meet the increased cost of operating the OKEU Hospital, funding the operations of Victoria Hospital as a respiratory hospital, maintaining other respiratory centres as well as the quarantine and isolation centres.

• Meet the costs of funding and operating the National Feeding Programme intended to feed up to 10,000 people daily for a period of six weeks.

Additionally, our Government remains committed to meeting all debt servicing obligations in addition to its obligations as per the 3-year collective agreement we negotiated with public sector trade unions, covering the period 2019-2022.

As I recently announced in the Social Stabilization Plan, we have been working with the ECCB and the commercial banks to provide a moratorium on interest and principal payments.  We started this process since February with a view to protecting our citizens from the anticipated fallout which is why the banks were able so early in the game, to offer debt payment deferrals.

This moratorium is for a six month period in the first instance, with a possibility of further extension. And I wish to sincerely thank them all for their willingness to work with our Government and our people as we navigate through this crisis.  Efforts are afoot to secure similar arrangements with other local financial and non-financial institutions, such as the credit unions, micro-loan and insurance companies.

The Government has taken an aggressive multi-faceted approach to this situation – we are tackling it from all sides, but only time will tell if this is enough because of the level of uncertainty which looms.

The Managing Director of the IMF recently stated that the already dire economic forecasts may still be too optimistic.  The IMF projects that 170 countries will see income per capita shrinking during 2020 and that poor countries will be hit multiple times – first by the pandemic, then by the spill-over from economic contraction elsewhere, by the flight to safety and because remittances from the diaspora are expected to dry up.

There is no lack of evidence as to how bad the situation is around the world.  Disney, the world’s largest entertainment company just announced a few days ago that it is letting go half of its staff of 200,000 persons.  And there are signs that its parks won’t reopen until next year. Some US universities are telling students they won’t be open in the fall but rather in January 2021.   Jobless claims in the US have reached 26 million since coronavirus hit, wiping out all gains since 2008 recession.

So the continued uncertainty of what is to unfold globally as well as locally puts even greater pressure on our economy and reduces our ability to rely on typically predictable trends and economic projections.

However, inaction is not an option.  We must take decisions to put ourselves in a position to recover from this even though the situation regarding COVID-19 is evolving almost daily.  And we are doing so."

SALCC lecturers angered as salaries not paid on scheduled date