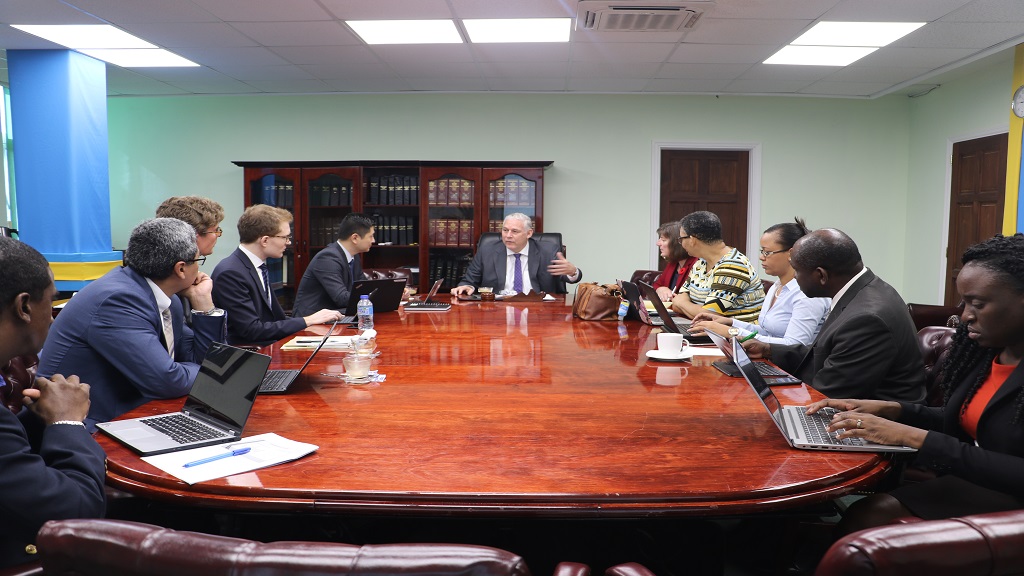 The International Monetary Fund’s 2019 Article IV Mission statement is an encouraging report for the Government of Saint Lucia. Prime Minister and  Minister for Finance, Economic Growth, Job Creation, External Affairs and the Public Service, Honourable Allen Chastanet, has explained that the report is further evidence that the Government is on the right track and fiscal and policy measures put in place over the past three years are delivering results.

The statement was released by the IMF mission who visited Saint Lucia during October 29-November 8, 2019, for the annual Article IV consultation discussions on economic developments and macroeconomic policies and states that Saint Lucia’s near-term growth prospects are “favourable, supported by large infrastructure investments and robust tourist inflows.”

The IMF recognized that despite delays in public infrastructure, Saint Lucia has had robust tourism inflows which have sustained economic activity.

“Growth picked up in 2019 with record growth in tourism activities more than offsetting a contraction in construction. Preliminary information also shows a further improvement in the current account,” the report states while also recognizing the decrease in unemployment.

The report went further: “Near-term growth prospects are favourable, albeit with downside risks. The commencement of large public infrastructure projects by the year-end is expected to substantially boost growth in 2020-22. The major upgrade of the international airport and the road network will help address capacity constraints and has the potential to catalyze a more durable expansion of the tourism sector and related activities.”

Prime Minister Chastanet has described the report as proof that Saint Lucia is “turning a corner.”

“Over the last three years we have put a tremendous amount of work into getting the economy restructured, with an emphasis on some of our critical macro-economic numbers,” explained PM Chastanet. “We have definitely turned a corner, in that we are starting to see some of those numbers stabilize. What is incredibly encouraging to us is that this information is coming out just as the Government is about to embark on our major capital investment programmes. So it means that these successes that we have obtained have been through fiscal and also general policy initiatives. As encouraging as the statements from the IMF are, there is still a tremendous amount of hard work to be done.”

The Prime Minister added that the Government must remain focused on its goals.

“We need to create a more efficient Government and the e-platform will help us achieve that,” the PM said. “We will continue to push the continued investment in infrastructure, roads, the airport, the cruise ship terminals, the new container port, the north south highway, the work taking place in the water sector. All these are critical in order to be able to develop the capacity. We must ensure that the investments, local and international, private and public sector, do materialize and create benefits for all.”

The Prime Minister said that the Government is further encouraged by the decline in unemployment.

“Even before we get those major projects going we have already seen a decline from 25 percent to 18 percent. Also youth unemployment is down 10 percent, from 44 percent to 34 percent. With some of the additional expansion with existing and new call centres, the jobs that are going to be created in construction and the continued growth of small businesses, we think that by next summer we will see a further reduction in our unemployment numbers.”

The Prime Minister also took note of the concerns of the IMF regarding public debt and impediments to growth.

“The IMF has pointed to some areas where the Government needs to stay focused and we have been focused on these areas and on managing our debt which is why we put in place measures to collect revenue to meet our debt obligations,” the Prime Minister added. “Overall, however, this is a sign that what we doing is working and we have to keep Saint Lucia on this positive path.”

The IMF further advised that fiscal policies should be geared toward rebuilding policy space and ensuring public debt converges to the ECCU target of 60 percent of GDP by 2030.

The report added that “Prudent fiscal policies in recent years, supported by revenues from the citizenship-by-investment program (CIP), have helped to stabilize public debt as a share of GDP. The primary fiscal position is projected to remain broadly balanced in 2019, notwithstanding additional salary expenditures and retroactive wage increases from the recently concluded wage negotiations.”

The IMF noted that “the government’s near-term focus should be on revenue-enhancing measures and investing to build resilience against climate related shocks. The fiscal measures that have been announced—including reforms to the personal income tax and the residential property tax—are expected to be budget neutral in the near term.”