PM - Japanese Grant for Bridges Significant Due to Climate Change 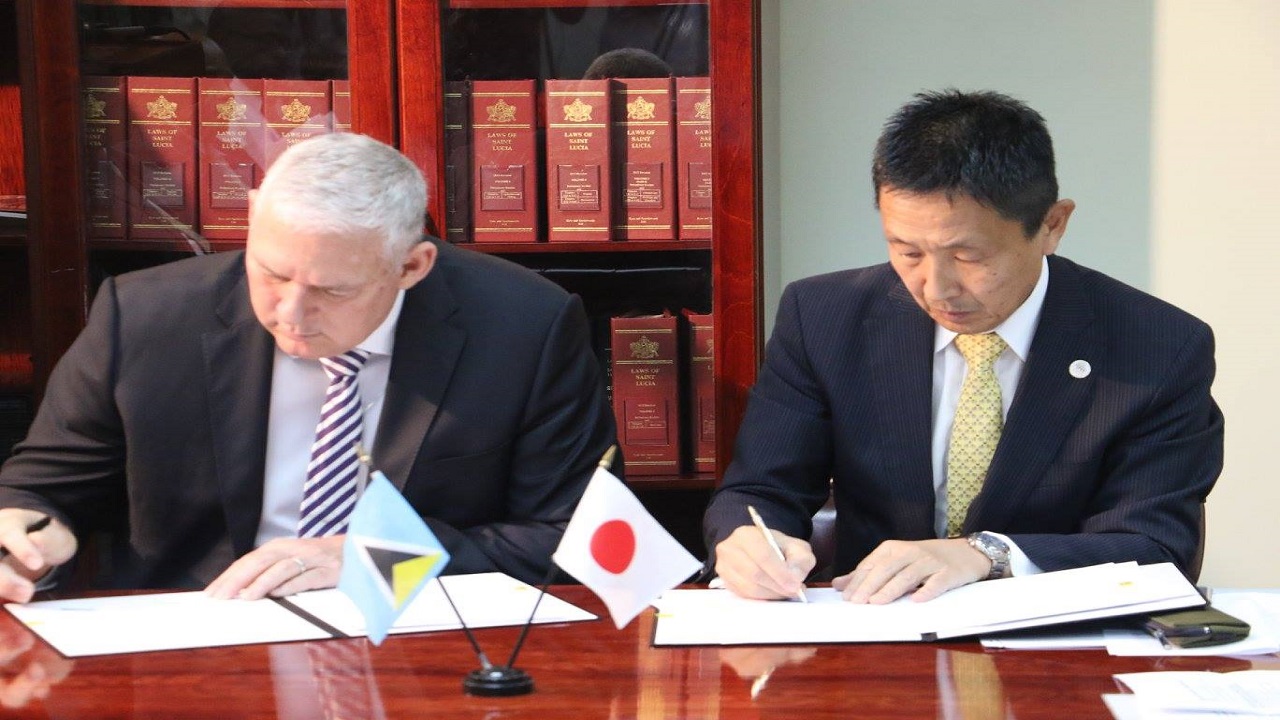 As the Prime Minister of Saint Lucia prepared to sign an agreement with the Japanese Government for a Grant for the reconstruction of bridges in the Cul De Sac basin he stressed that the policy and strategy of Government as it pertains to Climate Change and the impact it is having on the island’s infrastructure has been and will continue to be a top priority.

At the brief ceremony for the Exchange of Notes for the Japanese Grant Aid for the Ravine Poisson and Cul de Sac Bridges held at the Office of the Prime Minister on Wednesday August 9th 2017, Prime Minister Honourable Allen Chastanet took the audience through some of the challenges faced by Small Island Developing States (SIDS) such as Saint Lucia.

Also in attendance at the signing was Minister for Infrastructure, Ports, Energy and Labour Honourable Stephenson King and Minister for Agriculture, Fisheries, Physical Planning, Natural Resources and Co-operatives Honourable Ezechiel Joseph along with Ministry officials and members of the Japanese delegation. Speaking first at the signing was Permanent Secretary in the Department of Infrastructure, Ports and Energy Mr. Ivor Daniel, who gave an overview, explaining that the project is in-keeping with the National Hazard Mitigation Policy, which aims to reduce the country’s vulnerability to natural hazards and the impact of climate change.

Also speaking at the event was His Excellency Mitsuhiko Okada, Ambassador of Japan to Saint Lucia, who outlined Japan’s areas of cooperation with Saint Lucia which included disaster risk reduction, sustainable management of marine life and human security. The assistance is being channelled through the Japan International Cooperation Agency (JICA), and that organization’s director general for Latin America and the Caribbean, Mr. Hajime Takeuchi, also delivered remarks at the event about the significant contributions made to assist not just Saint Lucia but the region. For the reconstruction of the much-needed bridges Japan is contributing XCD$37 Million.

In his remarks Prime Minister Allen Chastanet repeatedly thanked the Japanese for the Grant for the bridges which are expected to commence in early 2018. He explained that on the world stage more developed countries needed to assist the SIDS in the quest to combat the effects of Climate Change.

“I had the opportunity to attend World Bank meetings and IMF meetings and I am very grateful that both those organizations have chosen to have a setting for the small island developing states of the world,” noted the Prime Minister. “That was followed by the COP meeting that took place in Marrakech. I want to also recognize the work that was done by our predecessors in supporting the Climate Change agreement at COP in Paris in which we formalized the recognition that Climate Change is real and a roadmap for how the world intends to be able to deal with the problem.  In the roadmap the world gave itself a challenge to raise 100 billion dollars to go towards mitigation and funding adaptation.”

The Prime Minister explained that the momentum had been stymied by recent decisions by the United States in relation to the Paris Agreement. However, some of the SIDS, inclusive of Saint Lucia are proposing alternatives to get assistance for critical infrastructural projects that help with adaption.

“One is exactly what is taking place here today where the Government of Japan, through JICA, are making a bilateral contribution to Saint Lucia in a project that is a critical infrastructural project. What we would like to see is Japan being given a credit for that contribution,” explained the Prime Minister.

The second alternative was that SIDS be allowed to access concessional funding.

“I am going to keep pounding on the table and letting my voice be heard explaining that the SIDS cannot wait,” said Prime Minister Chastanet. “There is no greater example of that than what took place in Haiti. After the earthquake in Haiti where over 250,000 people were displaced, there needed to be greater expediency in solving that problem. Did we not know that Haiti was in a hurricane belt? Did we not know that there was clearly a trend of increasing storms? That all we needed was a trough? What took place last year, the world and all of us must bear responsibility for. The Haitian people were left to confront one of the strongest and most devastating hurricanes we have seen in a long time with cardboard boxes.”

The Prime Minister explained the focus of his remarks to the captive audience: “Time is against us. I say all of this to underscore that point and for us not to take for granted the significance of today. It is very easy for us to continue to come to these signings of agreements and almost take it for granted what we are receiving. This project has the opportunity and potential to protect the lives and the assets of many people.”

Prime Minister Chastanet ended by thanking all the technical staff at the various Ministries for their persistence on the project. He also thanked his Cabinet of Ministers and explained that there were several very long sessions to ensure that this project was the right one.

“I really want to thank Ambassador Okada and your team for your incredibly kind generosity and for your patience. We look forward to this project starting and bringing relief to the people in the Cul De Sac area.”

An official Vote of Thanks was delivered by Cabinet Secretary Mr. Benjamin Emmanuel who underscored how essential the project was for the Cul De Sac area and further pledged Government’s the support.