With many eyes on the United Nations Headquarters and the videos coming out of the meetings and debates this year, this pair decided to use their platforms to make sure that the first world countries and large continents understand that climate change is impacting the small island developing states (SIDS) the most and at a faster rate.

"We can no longer afford the luxury of half-assing it as we willingly force ourselves beyond the threshold of no return.

"As a human species, we need the Earth to survive. Make no mistake, the Earth does not need us.

"We are demanding global unity for a global crisis. [...]

"We must right the wrongs we have done against our children and grandchildren because we are gifting them a world that suffers from our irresponsible stewardship."

Momoa hammered it home further saying, "We are a disease that is infecting our planet." Calling the level of pollution globally "shameful", he called on first world countries to help, to not feign ignorance, and to work collectively now because though contributing the least, the small islands "are made to suffer the weight of these consequences."

Though "nervous", Momoa gave a very honest speech. Sharing it on his Instagram, he captioned the over six-minute-long video, 'No BS. Nothing sugar coated, just straight from the heart. We’ve been half assing our global efforts to reverse the
climate crisis and this can’t continue. We have to change now. For the future of our planet, and Small Island Developing States, the wave of change is coming. Aloha J #UniteTheNations
@unitednations'

Prime Minister Mia Mottley acknowledged the timely nature of the theme of the 74th United Nations General Debate, but she too went on to state that climate change cannot be sidelined, ignored or belittled.

"Barbados supports the timely theme of 'Galvanizing multilateral efforts for poverty eradication, quality education, climate action and inclusion'. We could not have chosen a more relevant and appropriate theme... We [Barbados] have made good progress but our gains, my friends, are in jeopardy from one main challenge that you know all too well -h tat challenge of climate change. And denying the existence of climate change my friends does not diminish its reality."

Extending her sympathy once again to The Bahamas especially those victims and survivors of Abaco Islands and Grand Bahama after the passing of Hurricane Dorian, she went on to say, "That catastrophe represents an unfortunate new normal for many in small island developing states."

Calling it "horrific", Barbados' leader urged that this world that we live in can no longer ignore climate change. She stressed, it is not hurricanes alone, we face drought and sargassum. "It is the world of our children that is absolutely at risk." 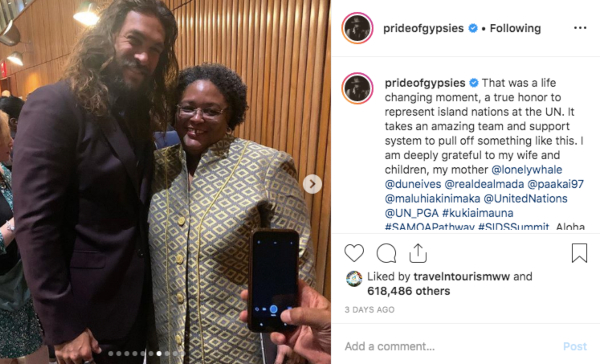 Sharing a photo of himself with Barbados' Prime Minister after they both spoke during the opening segment of the High-level meeting to review progress made in addressing the priorities of SIDS through the implementation of the Accelerated Modalities of Action (SAMOA) Pathway, Momoa wrote:

Jason Momoa: One of the toughest actors in the business is a big softie

WATCH: Ignore climate change at your own peril, Mottley warns