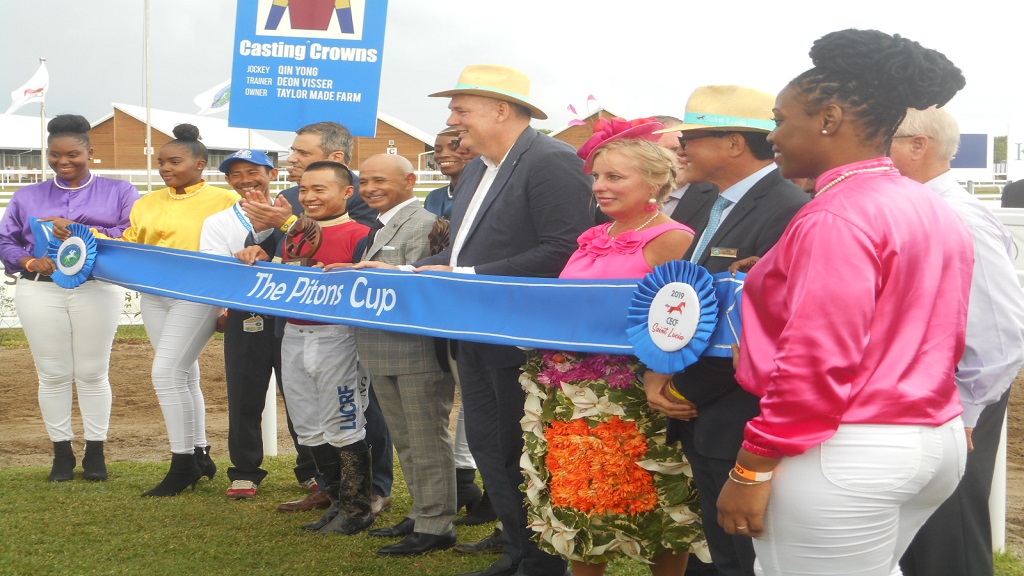 The Pitons Cup: Jockey Qin Yong with his trophy, Prime Minister Allen Chastanet (centre) and other members of the winning connection.

The mammoth and enthusiastic crowd, the competitiveness of the races and the beauty of the facility, despite it not being fully completed, created an atmosphere which was truly a sight to behold.

The grand event attracted a large number of foreign dignitaries, including investors, horse owners and trainers, among others, who commended Saint Lucians for their hospitability.

The locals, many of who saw a horse race for the first time, were not left out of the action. They cheered the jockeys who rode the horses on which they betted on as they galloped to the finishing line. 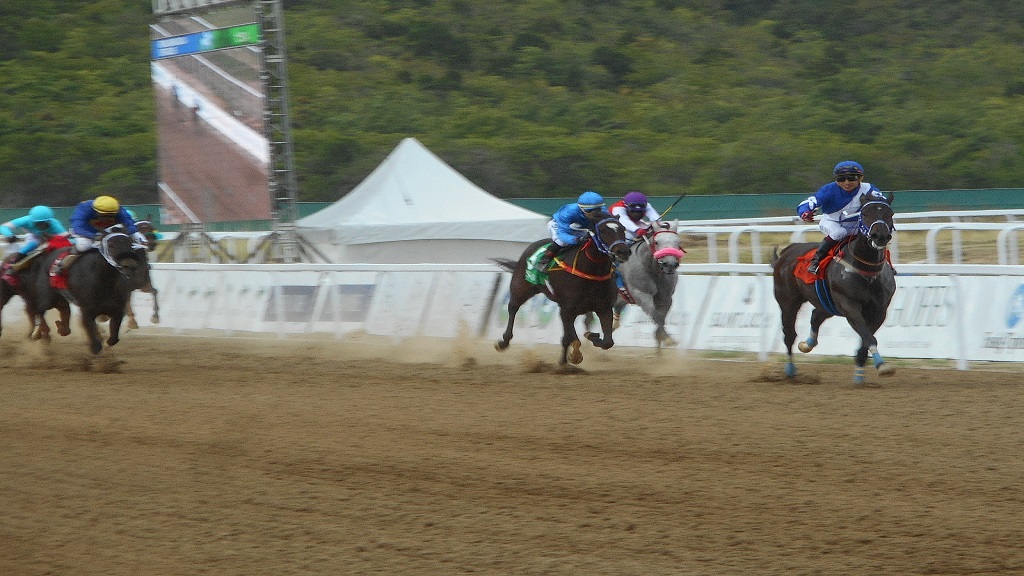 A race in progress

There were four races held on the day which generated immense interest among the appreciative crowd.

The feature race, the US $150,000 Pitons Cup (1800) was won by the horse Colonel’s Pride. Its owner David A. Bernsen, trainer Don Visser and jockey Qin Yong, were all beaming with delight after their victory.

Asked what he attributed to his victory in the feature race, Yong told a news conference: “I followed instructions…”

Second place in the feature race went to Castings Crowns, owned by Taylor Made farm, trained by Don Visser and jockeyed by Qin Yong.

Prime Minister Allen Chastanet told the media that his government is determined to make Vieux-Fort the envy of the Caribbean.

“Let’s look at the Caribbean, we have Bridgetown, Port of Spain, Kingston…If I were to go around and ask people of the Caribbean to give me the top 10 cities in the Caribbean, where do you think Vieux-Fort or Castries will come?” Chastanet asked.

He added: “I am putting Saint Lucians and the Caribbean on notice that Vieux-Fort is going to become a household name. It will become the premium city destination in the Caribbean, and I am very excited.” 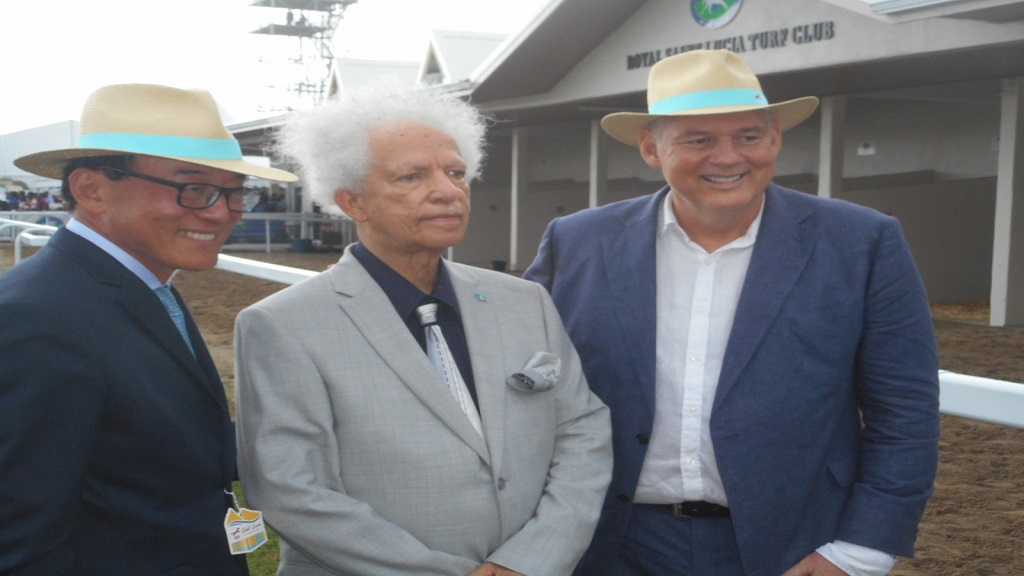 He said his government has a very clear plan as to what it wants to do, adding that it did not include the Desert Star Holdings (DSH) nor Teo Ah Khing, the chairman of DSH in the plan.

However, according to Chastanet, to have met with Teo Ah Khing and to be able to share and support his vision will redound to the benefit of all Saint Lucians.

He said the turn-out for the event shows the love Saint Lucians have for horses.

The prime minister congratulated DSH for the “incredible” work it has done, adding that it is just part of what they are doing.

Hon. Dominic Fedee, Minister of Tourism, information and Broadcasting said the tourism industry in Saint Lucia has a bright future.

“We are going out there and tell people that Saint Lucia is the most inspiring and iconic destination for them to visit,” Fedee said. 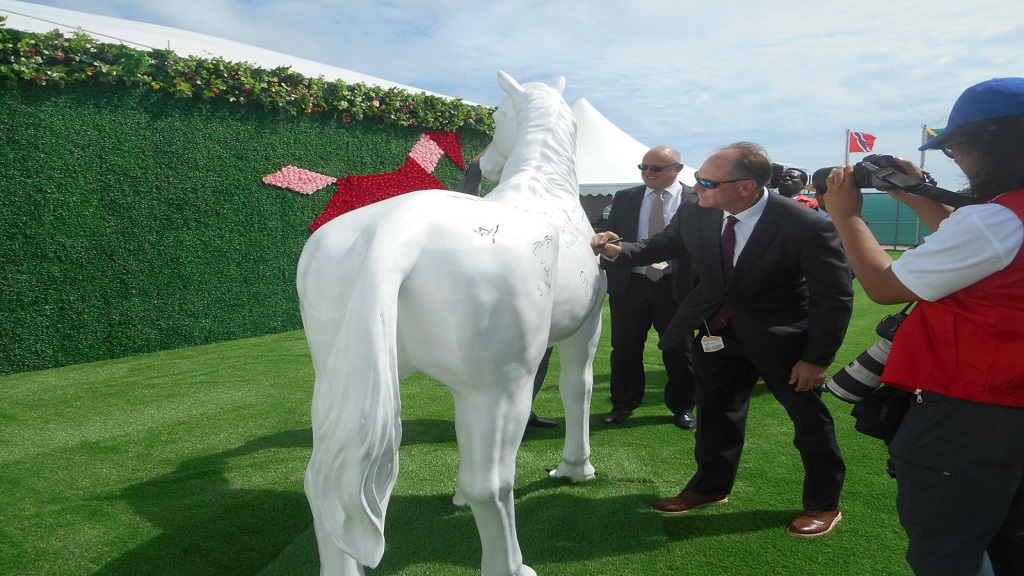 A foreign dignitary signs his name on a horse statue

According to Fedee, Saint Lucia is getting to a point where it can compete with bigger islands in terms of air accessibility.

“In a few days time, we will be going to Chicago to welcome a new flight, American Airlines, and the inaugural flight will take place on December 21, 2019, which will be a weekly flight. It will be the first time American Airlines will be travelling to Saint Lucia from Chicago,” Fedee explained.

His Excellency Sir Neville Cenac, in his address to the gathering, explained the importance of National Day.