Police, angry crowd face off after fatal shooting in Memphis 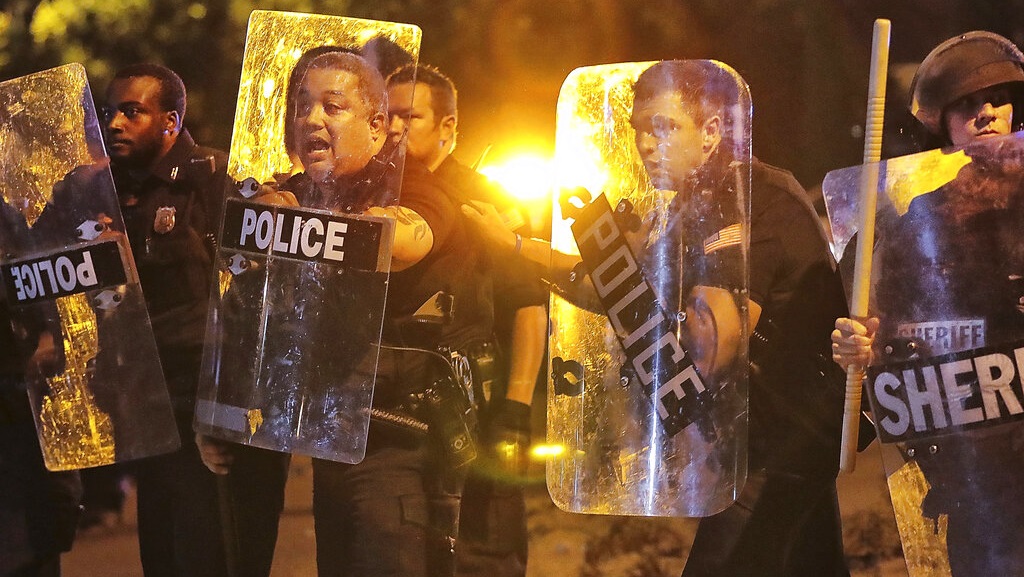 Armed officers and an angry crowd faced off after a Tennessee man was fatally shot by U.S. Marshals in a working-class Memphis neighbourhood.

People in the crowd threw rocks and bricks, with 25 officers suffering mostly minor injuries during the tense clash Wednesday night in the Frayser community in north Memphis. Officers cordoned off several blocks near the scene. By 11 p.m., officers had used tear gas and most of the crowd dispersed, police director Michael Rallings said at a Thursday morning at a news conference. Three people were arrested.

Officers on horseback patrolled the area, and lines of police cars with flashing blue lights were parked along the street. An ambulance could be seen at the outer edge of the scene. A helicopter flew overhead as police cars trickled away. Residential streets were blocked, and a heavy police presence remained in the area Thursday.

Tennessee Bureau of Investigation spokeswoman Keli McAlister said the Gulf Coast Regional Fugitive Task Force went to a Frayser home to look for a suspect with felony warrants. Marshals saw the man get into a vehicle and then proceed to ram task force vehicles several times before exiting with a weapon, McAlister said. Marshals then opened fire, killing the man who died at the scene. McAlister did not say how many marshals fired or how many times the man was shot.

One local official identified the victim as Brandon Webber and said he was shot several times in his family's front yard. Family members confirmed to the Daily Memphian that the 21-year-old Webber died.

In identifying Webber on Twitter early Thursday, Shelby County Commissioner and mayoral candidate Tami Sawyer said "Every life lost should matter...every single one. How many times will this be ok? It cannot continue to be."

Memphis police officers were called in to help with crowd control as word of the shooting spread on social media. As more protesters showed up, more Memphis officers and Shelby County sheriff's deputies arrived at the scene. The situation then escalated, and officers donned protective riot gear as people threw rocks and bricks. Police cars and a nearby fire station were damaged, Rallings said.

The TBI is called in to investigate police-involved shootings by district attorneys in Shelby and other counties in the state. TBI investigators then give their report to the district attorney, who will decide whether to pursue charges against officers involved.

The police director implored residents to wait until the TBI finishes its investigation before spreading possible misinformation about the shooting. "I need everyone to stay calm," Rallings said.

While police support the right of people to demonstrate, Rallings said: "we will not allow any acts of violence."

Passion Anderson, a 34-year-old student, drove her 13-year-old son to the scene early Thursday, after protesters had gone and the scene had calmed down. She grew up in Memphis but left to Ohio before moving in November to the Frayser neighbourhood, a mostly low- to middle-income area north of downtown.

Anderson said she worries about her son's safety every day in Memphis which like other large cities, struggles with violent crime.

"I just want him to see this, know what's going on, to be conscious," she said from the driver's seat of her car, with her son in the passenger seat. "I fear for him all the time."