Police: Truck attack suspect 'did this in the name of ISIS' 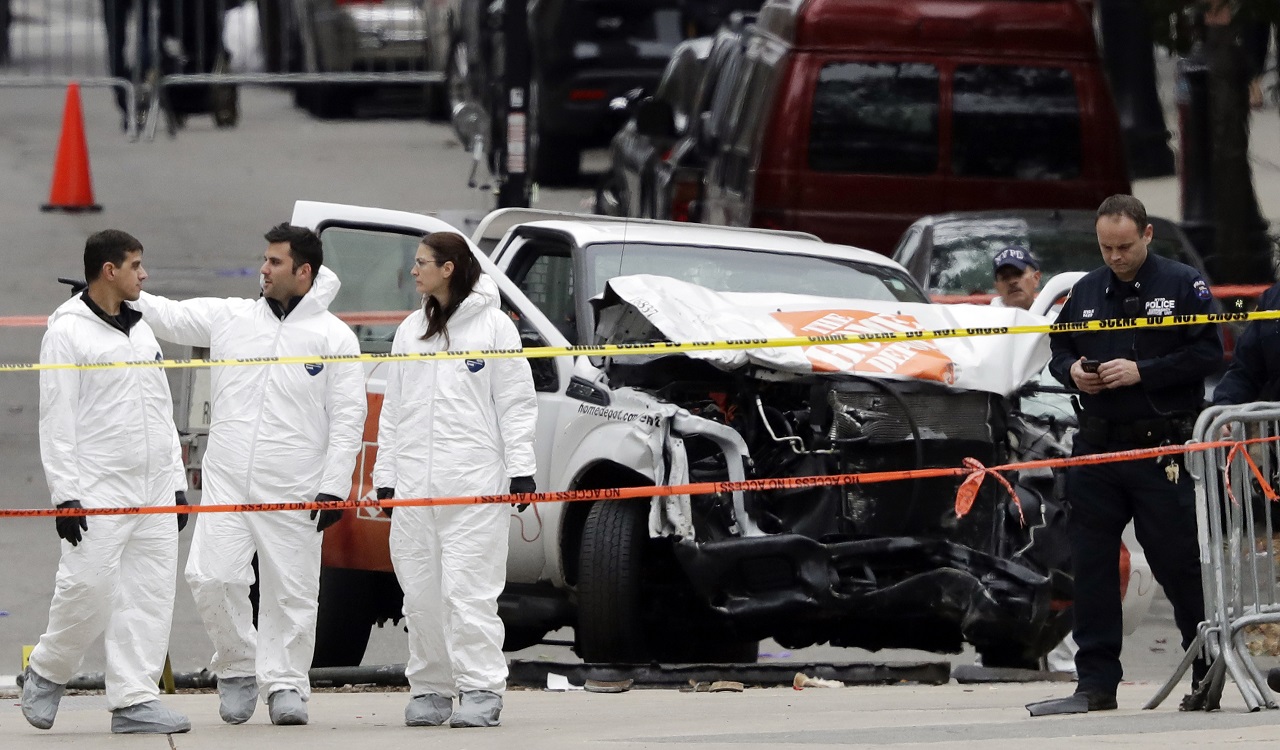 Law enforcement personnel examine the scene Wednesday, Nov. 1, 2017, after a driver mowed down people on a riverfront bike path near the World Trade Center on Tuesday in New York.

The Uzbek immigrant accused of using a truck to mow people down along a bike path, killing eight, "did this in the name of ISIS" and followed the extremist group's online instructions practically to the letter, police said Wednesday.

Investigators, meanwhile, were at the hospital bedside of 29-year-old Sayfullo Saipov, working to extract information about the attack Tuesday near the World Trade Center memorial that also left 12 people injured.

Saipov was shot by a police officer after jumping from his rented Home Depot pickup truck.

John Miller, deputy police commissioner for intelligence, said Saipov left behind notes at the scene, handwritten in Arabic with symbols and words, that essentially said the Islamic State group, or ISIS, "would endure forever."

"It appears that Mr. Saipov had been planning this for a number of weeks. He did this in the name of ISIS," Miller said, citing the notes.

In the past few years, the Islamic State has been exhorting followers online to use vehicles or other close-at-hand means of killing people in their home countries. England, France and Germany have seen deadly vehicle attacks in the past year or so.

"He appears to have followed, almost exactly to a T, the instructions that ISIS has put out in its social media channels before with instructions to its followers on how to carry out such an attack," Miller said.

In Tuesday's attack, Saipov drove his speeding truck for nearly a mile along the bike path, running down cyclists and pedestrians, then crashed into a school bus, authorities said. He was shot in the abdomen after he jumped out of the vehicle brandishing air guns and yelling "God is great!" in Arabic, they said.

Miller said Saipov had never been the subject of a New York police investigation but appears to have some links to people who have been investigated.

The aftermath took a political turn Wednesday when President Donald Trump said Saipov came to the U.S. under a visa lottery program — "a Chuck Schumer beauty," Trump called it in a reference to the Senate's top Democrat.

The program dates to 1990, when Republican President George H.W. Bush signed it as part of a bipartisan immigration bill. Trump urged tougher immigration measures based instead on merit and said he will ask Congress to end the program.

Schumer, who represents New York, said in a statement that he has always believed that immigration "is good for America."

In a number of recent extremist attacks around the world, the assailants were found to have been "lone wolves" — inspired but not actually directed by the Islamic State. In some cases they never even made contact with the group.

On the morning after the bloodshed, city leaders vowed New York would be not intimidated, and they commended New Yorkers for going ahead with Halloween festivities on Wednesday night.

They also said Sunday's New York City Marathon, with 50,000 participants and some 2 million spectators anticipated, will go on as scheduled.

While the mayor said there have been no credible threats of any additional attacks, police announced the deployment of sniper teams, bomb-sniffing dogs, helicopters, sand-truck barricades and other stepped-up security along the marathon route, in the subways and other sites.

And New York Police Commissioner James O'Neill urged people to be vigilant and tell police if they see "something that doesn't look right."

The dead consisted of five people from Argentina, one from Germany, and two Americans, authorities said. Nine people remained hospitalized in serious or critical condition, with injuries that included lost limbs and head, chest and neck wounds.

A roughly two-mile stretch of highway in lower Manhattan was shut down for the investigation. Authorities also converged on a New Jersey apartment building and a van in a parking lot at a New Jersey Home Depot.

New Yorkers woke to a heavy police presence Wednesday outside the World Trade Center and at other locations around the city.

Runners and cyclists who use the popular bike path for their pre-dawn exercise were diverted away from the crime scene by officers stationed at barricades just north of where the rampage began.

Dave Hartie, 57, who works in finance, said he rides his bike along the path every morning.

"It's great to be in the city and have that kind of peace," he said. As for the attack, he said, "It's the messed-up world we live in these days. Part of me is surprised it doesn't happen more often."

The slight, bearded Saipov is from heavily Muslim Uzbekistan and came to the U.S. legally in 2010, police said. He has a Florida driver's license but was apparently living in New Jersey, they said.

He is a permanent legal U.S. resident. A law enforcement official said he has two children and a wife and moved up from Florida around June. The official wasn't authorized to discuss details of the investigation and spoke on condition of anonymity.

Records show Saipov was a commercial truck driver who formed a pair of businesses in Ohio. He had also driven for Uber.

Mirrakhmat Muminov, 38, of Stow, Ohio, said he knew Saipov because they were both Uzbek truck drivers. He portrayed Saipov as an argumentative young man whose work was falling apart and who "was not happy with his life."

Muminov said Saipov lost his insurance on his truck after his rates shot up because of a few traffic tickets, and companies stopped hiring him. Muminov said he heard from Saipov's friends that Saipov's truck engine blew up a few months ago in New Jersey.

Muminov said Saipov would get into arguments with his friends and family, tangling over even small things, such as going to a picnic with the Uzbek community.

"He had the habit of disagreeing with everybody," Muminov said.

He said he and Saipov would sometimes argue about politics and world affairs, including about Israel and Palestine. He said Saipov never spoke about ISIS, but he could tell he held radical views.

8 killed by New York motorist in 'cowardly act of terror'

The Latest: Trump answers terror attack: 'NOT IN THE U.S.A.'