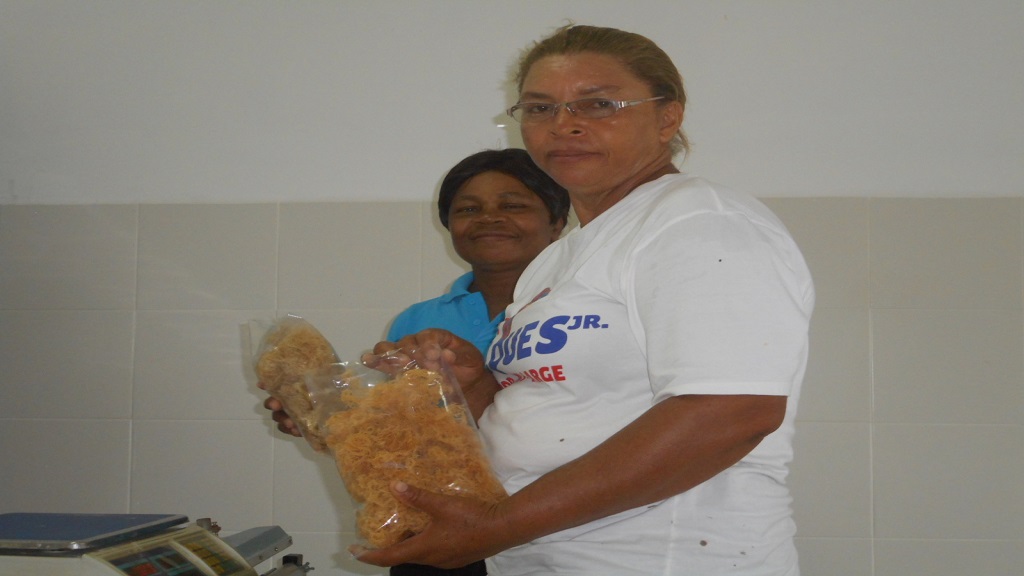 Greta Joseph (back) the association's production manager, with a member of staff (front).

The Praslin Sea Moss Farmers Association has finally penetrated the international market and is looking forward to making further inroads into it in the near future.

Last week, the association shipped 600 pounds of sun-dried sea moss to Miami and has another order for 1000 pounds.

The association sees this as a feat and is hoping to build on it to make it the envy of other sea moss associations on the island.

In addition to sun-dried sea moss, the association uses sea moss to produce juices of various flavors such as ginger, sorrel, guava, peanuts and passion fruit for the local market.

According to Greta Joseph, the association’s production manager, the association is looking forward to producing additional products from sea moss, such as ice cream, icicles and fertilizer, just to name a few.

Residents of Praslin, a small fishing community in Micoud, have been cultivating sea moss individually for a number of years, until in 1994, when a group of them decided to form an association, which currently comprises of over 100 members.

In an interview with Loop News, Joseph said a number of their members have been trained in sea moss cultivation by the Department of Fisheries, and it has paid off.

“It was a very good initiative. It has helped the association,” she said.

According to Joseph, forming the association was not an easy task, adding that the members had to make a sacrifice of taking a loan to start it.

She said now that the association is making progressive strides, some of those people who were not keen on joining it are now watching its progress with envy.

Joseph said sea moss cultivation is their livelihood in Praslin, adding that a number of persons in the community, who were once banana farmers, are now sea moss farmers. She said she would like to see sea moss replace bananas in Saint Lucia.

“Sea moss has great nutritional value and is very good for our health. I constantly read about its importance,” she said.

Joseph said she is confident that their market will grow significantly in the future. “We are looking for bigger markets which I feel we will get. We want to take sea moss to the world,” she said.

According to Joseph, the association is now given much support from members of the community, many of who sell sun-dried sea moss to them.