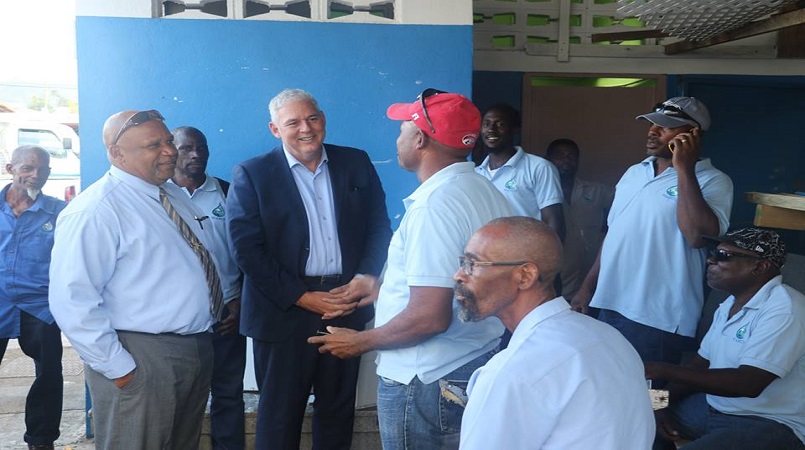 Employees of the Water and Sewerage Company Inc (WASCO) got to meet and share their work experiences with Prime Minister Honourable Allen Chastanet as he continued his Meet the Workers Tour which has seen the Prime Minister visit with the staff of various institutions right in their work environments.

On Tuesday August 21st 2018, the Prime Minister visited the offices of WASCO at L’Anse Road, Castries and held a brief meeting with the management of WASCO before he toured the facility and talked to workers at all levels one on one. Accompanying the Prime Minister on the tour was Minister for Agriculture, Fisheries, Physical Planning, Natural Resources and Co-operatives, Honourable Ezechiel Joseph.

Chairman of WASCO, Mr. Francis Denbow, explained that the Wasco team was honoured that the Prime Minister had taken time to visit the staff and the facility. The Chairman reported that it had been a very active past two years for WASCO and several projects have begun or been completed including the commencement of the John Compton Dam Rehabilitation Project, the Babonneau Pipe layout, Water Supply Improvement and Upgrade of the Hill20 Treatment plant, the Dennery North Water Supply Improvement Project, the Canaries Water Treatment Upgrades and Site Protection, the laying of the foundation for the Belvedere to Bouton Water Extension project and the Ti-Rocher/Micoud Water Supply Project. WASCO has also received financing from the Caribbean Development Bank (CDB) towards the cost of the Vieux Fort Water Supply Redevelopment Project. The Prime Minister and Minister Joseph discussed ways of improving the water supply and service delivery to the population and pledged the Government’s support to the efforts of the WASCO team.

“We have some very excited workers who are looking forward to speaking with you,” said General Manager Edmund Regis as the Prime Minister set out to speak directly with workers in the different departments, asking questions and giving them a listening ear. The following day the Prime Minister also visited with workers at the WASCO office in Vieux Fort.