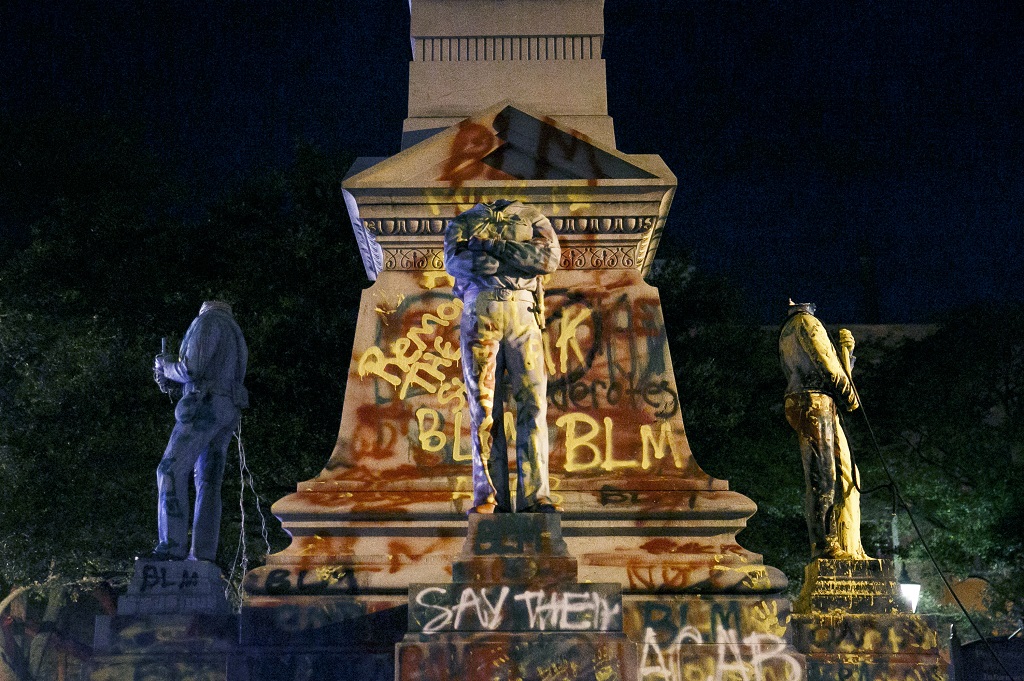 Protesters pulled down a century-old statue of Confederate President Jefferson Davis in the former capital of the Confederacy, adding it to the list of Old South monuments removed or damaged around the US in the wake of George Floyd’s death.

The eight-foot (2.4-metre) bronze figure on Richmond’s grand Monument Avenue had been all but marked for removal by city leaders in a matter of months, but demonstrators took matters into their own hands Wednesday night, tying ropes around its legs and toppling it from its stone pedestal onto the pavement.

A crowd cheered and police looked on as the monument — installed by a Confederate heritage group in 1907 during the Jim Crow era — was towed away.

There were no immediate reports of any arrests. 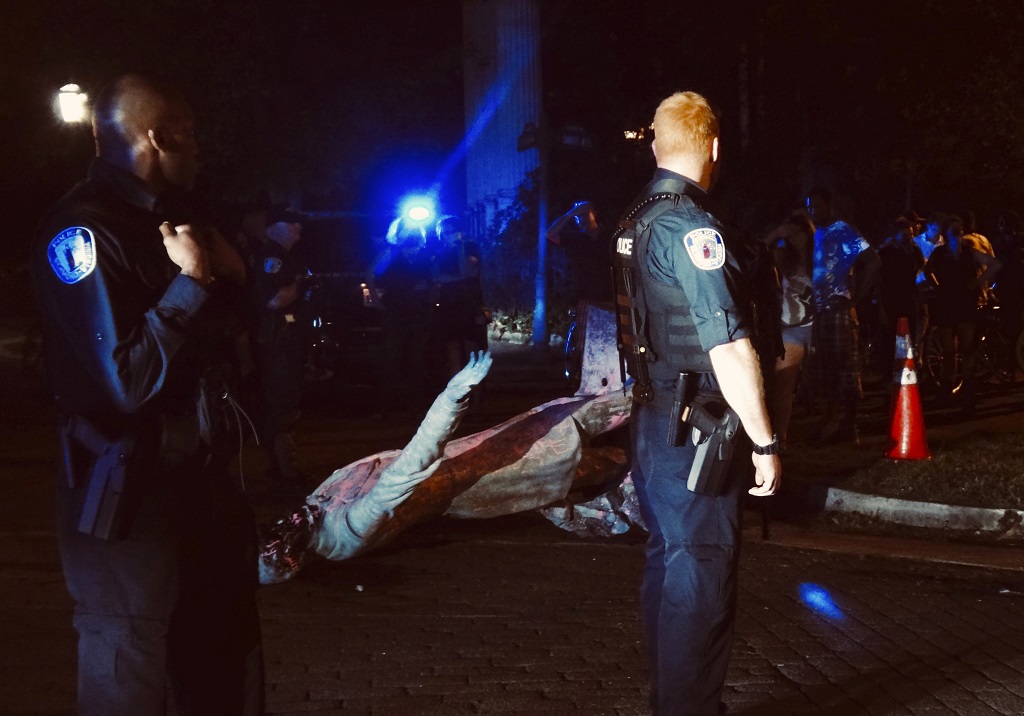 [In this photo provided by @thicketoftrash, a police officer looks toward the toppled statue of Confederate President Jefferson Davis along Monument Drive, Wednesday night, June 10, 2020, in Richmond, Virginia. (@thicketoftrash via AP)]

The toppling came on the same day NASCAR banned Confederate flags — a common site for decades in a sport steeped in Southern tradition — at its stock car races. Also this week, the streaming service HBO Max temporarily removed the 1939 movie "Gone With the Wind," criticised for romanticising slavery and the Civil War-era South, to add historical context.

In the weeks since Floyd's death under a white Minneapolis police officer's knee set off protests and sporadic violence across the US over the treatment of black people, many Confederate monuments have been damaged or taken down, some toppled by demonstrators, others removed by local authorities.

Authorities in Alabama got rid of a massive obelisk in Birmingham and a bronze likeness of a Confederate naval officer in Mobile. In Virginia, a 176-year-old slave auction block was removed in Fredericksburg, and the United Daughters of the Confederacy took down a statue in Alexandria.

The movement has extended around the world, with protesters decrying monuments to slave traders, imperialists and explorers, including Christopher Columbus, Cecil Rhodes and Belgium's King Leopold II. 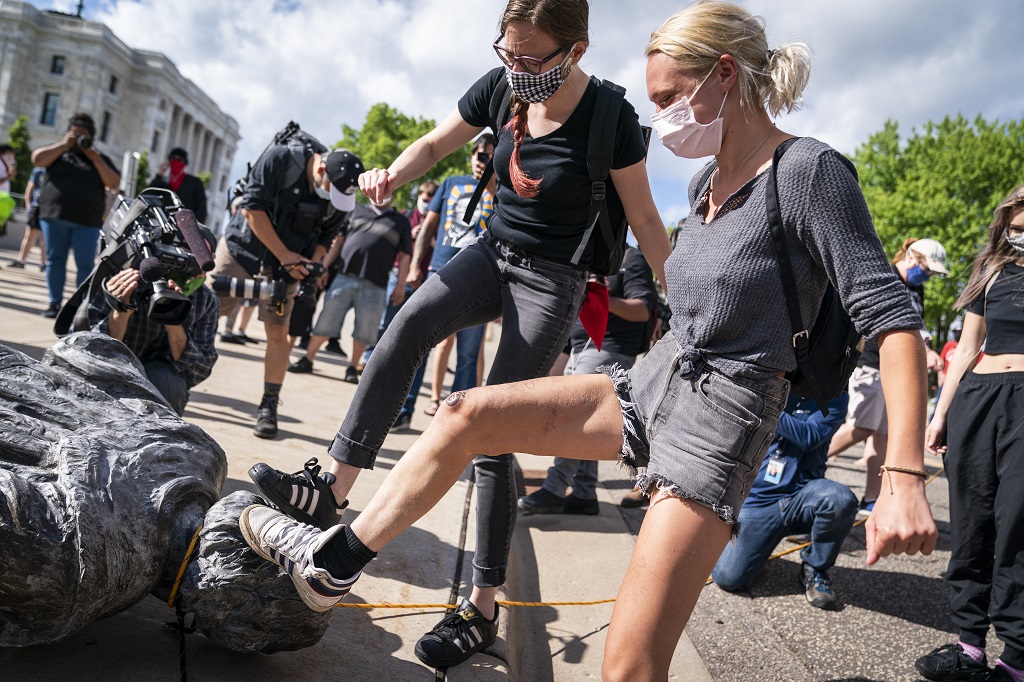 [People take turns stomping the Christopher Columbus statue after it was toppled in front of the Minnesota State Capitol in St Paul, Minnesota, on Wednesday, June 10, 2020. (Leila Navidi/Star Tribune via AP)]

The Davis monument was a few blocks away from a 12-ton, 61-foot-high equestrian statue of the most revered Confederate of them all, General Robert E Lee, that the state of Virginia is trying to take down. Democratic Governor Ralph Northam last week ordered its removal, but a judge on Monday blocked such action for at least 10 days.

The spokesman for the Virginia division of the Sons of Confederate Veterans, B Frank Earnest, condemned the toppling of "public works of art" and likened losing the Confederate statues to losing a family member.

"The men who served under Robert E Lee were my great-grandfathers or their brothers and their cousins. So it is my family," he said. "What if a crowd of any other group went and found the symbols of someone they didn't like and decided to tear them down? Everybody would be appalled."

The toppling of the Davis statue reflected protesters' impatience with political leaders. A commission of historians and government leaders in 2018 had recommended taking down the monument, and Mayor Levar Stoney recently announced he would introduce an ordinance in July to remove it and statues of other Confederates, including Generals Stonewall Jackson and J E B Stuart. 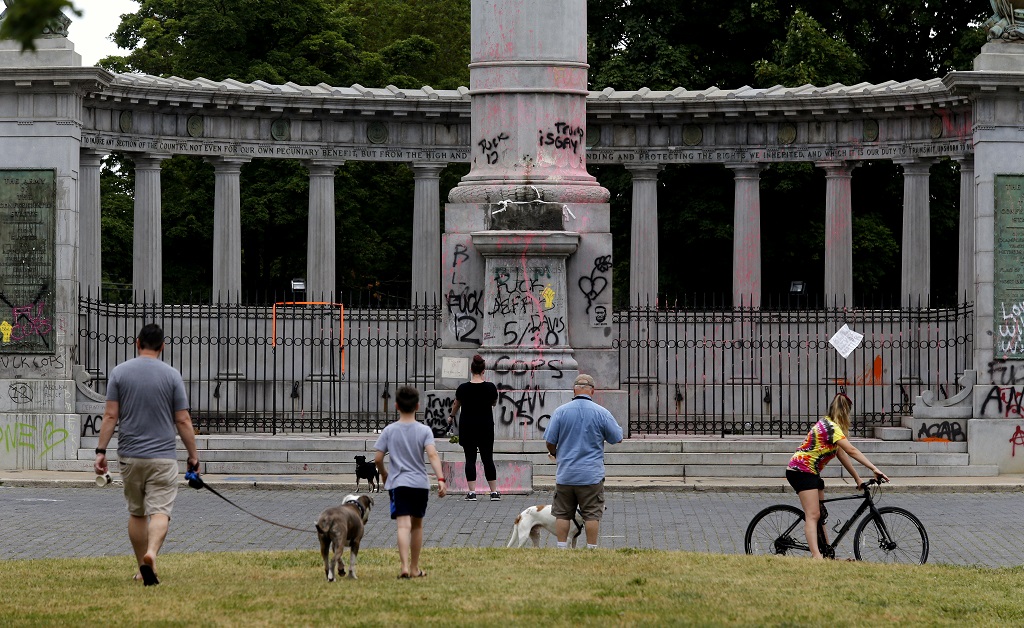 [People gathered at the Jefferson Davis monument on Monument Avenue Thursday morning, June 11, 2020 after the statue was pulled down by rioters the Wednesday evening. (Bob Brown/Richmond Times-Dispatch via AP)]

The move was supposed to coincide with the effective date of a new state law that undoes protections for Confederate monuments and lets local governments decide what to do with them.

Stoney tweeted Thursday that he will push to quickly dismantle the other monuments and asked protesters not to do it themselves.

"For the sake of public safety, I ask the community to allow us to legally contract to have the remaining ones removed professionally, to prevent any potential harm that could result from attempts to remove them without professional experience," Stoney said.

While it wasn't clear what would happen to the toppled Davis statue, the mayor indicated it is gone for good.

"He never deserved to be up on that pedestal," the mayor said, calling Davis a "racist & traitor."

Also Wednesday night, protesters in Portsmouth, Virginia, about 80 miles (130 kilometres) away, knocked the heads off the statues of four Confederates and pulled one of the statues to the ground after the City Council put off a decision on moving the monument.

A protester was hit in the head and knocked unconscious as the monument fell. He was hospitalised with what police said were life-threatening injuries.

James Boyd, the Portsmouth NAACP chapter president, said that "people are just tired of being sick and tired" and that the monument represents more than 400 years of oppression.

On Tuesday, protesters in Richmond tore down a statue of Columbus, set it on fire and pitched it into a lake.

Supporters of Confederate monuments have argued that they are important reminders of history, while opponents contend they glorify those who went to war against the US to preserve slavery.

The Davis monument and many others across the South were erected decades after the Civil War during the Jim Crow era when states imposed tough new segregation laws, and during the Lost Cause movement, in which historians and others sought to recast the South's rebellion as a noble undertaking, fought to defend not slavery but states' rights.

Watch: British protesters tear down statue, throw it into harbour