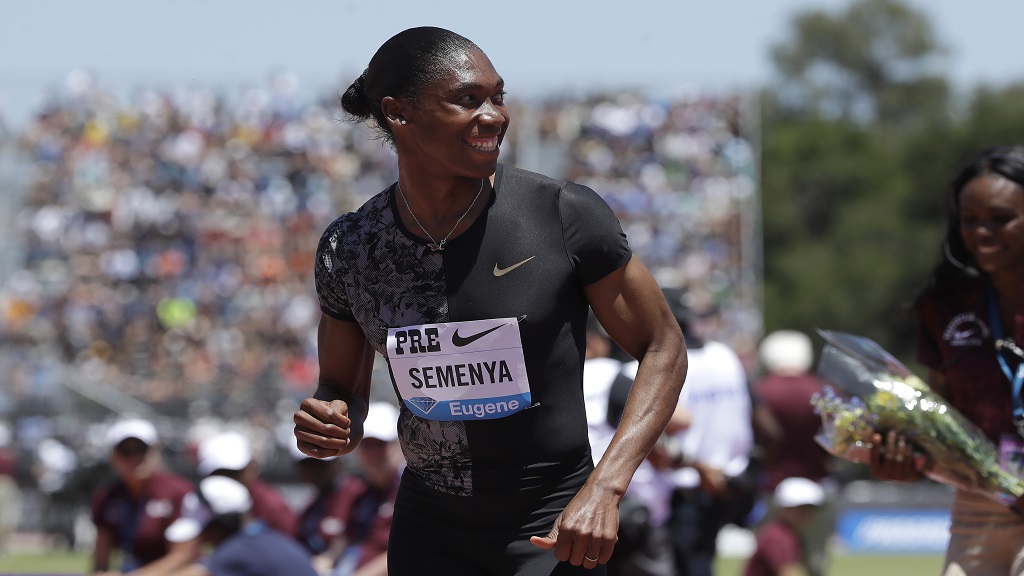 Tired, maybe, after 10 years of fighting track authorities, Caster Semenya has signed up to play with a South African soccer team.

Currently banned from competing in her preferred event, the two-time Olympic 800-metre champion might now be ready to give up running in favor of a sport where she isn't forced to take hormone-suppressing medication.

Semenya wrote on Twitter on Friday that she had joined Johannesburg-based women's club JVW FC, posting a photo of herself smiling and holding up a soccer shirt. She said in a separate statement she was looking forward to a "new journey."

The club, which is owned by South Africa national women's team captain Janine van Wyk, said Semenya began training with the team this week but she won't be registered to play league games until next year.

But that timing is significant because the South African women's soccer season in 2020 will be in action at the same time as the Olympics in Tokyo.

"I am grateful for this opportunity and I appreciate the love and support I already get from the team," the 28-year-old Semenya said. "I am looking forward to this new journey, and hopefully I can contribute as much as I can to the club."

Semenya, who won her first major track title at the world championships in Berlin a decade ago, didn't directly say if she was retiring from track and field. But she has hinted on numerous occasions on social media in recent months she would be willing to give up if she isn't allowed to compete in her favorite event without being forced to take medication to lower her natural testosterone level.

Semenya is barred from defending her 800 title at this month's world championships — and cannot currently compete in any top-level races in distances from 400 metre to one mile — after refusing to follow new IAAF rules requiring her to reduce her testosterone by taking daily contraceptive pills or having surgery.

She is appealing against those rules at the Swiss supreme court — her second legal challenge against them — but faced a setback in July when the court provisionally upheld the rules. That ended Semenya's ambitions to defend her title at the worlds in Doha, Qatar. She last ran a competitive race in June.

Semenya lost her first legal appeal at the Swiss-based Court of Arbitration for Sport (CAS) earlier this year, prompting her to go to Switzerland's supreme court.

The latest legal blow might have pushed her to quit. The Swiss Federal Tribunal said Semenya's latest challenge "does not appear with high probability to be well founded," although the court still hasn't given its final verdict.

In the hours after that provisional decision to uphold the testosterone regulations was announced, Semenya wrote on social media: "First chapter of my life done, looking forward to my second chapter."

Her social media pages have also been littered lately with images of soccer balls, uniforms and cleats.

The women's soccer league in South Africa is only semi-professional — the country's top players play overseas. But South Africa is bidding to host the next Women's World Cup in 2023.

Van Wyk, a former Houston Dash defender and probably South Africa's most successful female player, said Semenya had played soccer when she was younger and "it is no shock that she has finally set her sights on playing competitive football."

"I am extremely elated to have such an iconic athlete join my football club," van Wyk said. "I am absolutely honored that out of all the other women's clubs around the world, she (Semenya) has chosen JVW as the club where she would like to start showcasing her football skills."

Semenya is one of several elite female athletes with one of a group of conditions known as differences of sex development, which result in male and female biological characteristics. She was legally identified as female at birth and has identified as female her whole life but was born with the typical male XY chromosome pattern and has testosterone levels higher than the typical female range.

The IAAF says that testosterone gives her an unfair athletic advantage over other female runners and she must medically reduce it to be allowed to compete in certain events. The IAAF said athletes with her condition are "biologically male," an assertion that Semenya calls "deeply hurtful."

Semenya has three world titles to go with her two Olympic golds but has been fighting the IAAF ever since her first worlds in Berlin in 2009, when she arrived as an unknown teenager and beat the best. Her stunning success and muscular build prompted the IAAF to force her to undergo sex verification tests. She was suspended from competition for nearly a year and had to take hormone suppressing medication to be able to run from 2010-15.

Semenya has never spoken in detail in public about those experiences, but she revealed in court testimony in February how they threatened to kill her love of running.

In just one example, Semenya said she had been subjected to two intrusive sex verification tests without her proper consent when she was only 18. She called her treatment by track authorities "atrocious and humiliating."

Defiant Semenya to IAAF: Catch dopers, 'not us'