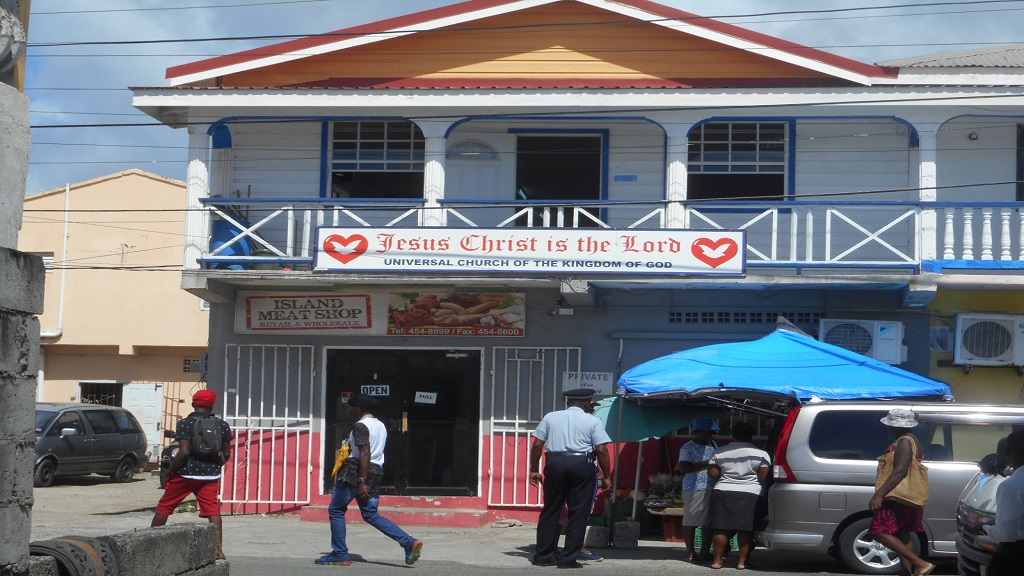 The Universal Church in Vieux Fort, located on the top floor of a meat shop

The increase in the number of religious denominations in the town of Vieux Fort over the years is of grave concern to the pastors and priests of the more established ones in the community and environs.

They are very aggressive in their campaign for members, supplying fliers about the word of God and their churches to everyone they meet.

The majority of those who join their flocks are young and middle-aged women. However, some leave as quickly as they join, upon realizing that the church was not able to supply a quick-fix solution to their troubles.

A young lady who recently backslid told Loop News that she did so because after spending a few months in the church she did not experience any changes in her life and felt that the money she gives to the church could be put to better use.

However, for some, those churches are their only salvation and they continue to serve their pastors dearly.

One of the local pastors who is very concerned about this recent development is Pastor Errol Charles of the Victory Baptist Church.

According to him, some of these "so-called" religious groups use seducing spirits to attract vulnerable people to their flocks, adding that many of them have ulterior motives.

“They are vulnerable people out there who are looking for somebody to worship, but because of the rebellious nature of the flesh, man still want to worship someone who will not control them,” Pastor Charles told Loop News.

He said that there may be a few good ones among them, but many of them do not preach salvation and just play on people’s emotions in order to increase their flocks.

“They just preach things to make people feel good…We are in the last days, so it is of no surprise that Vieux-Fort and other communities are victims of those churches,” the pastor lamented.

He also lamented that some people join the churches with the hope of getting a perfect man or woman to marry, and when those churches fail them, they go back to their original churches.

Another pastor who spoke to Loop News on condition of anonymity said the influx of churches in the community is all about making money, adding that he wants the government to investigate the operations of some of them.