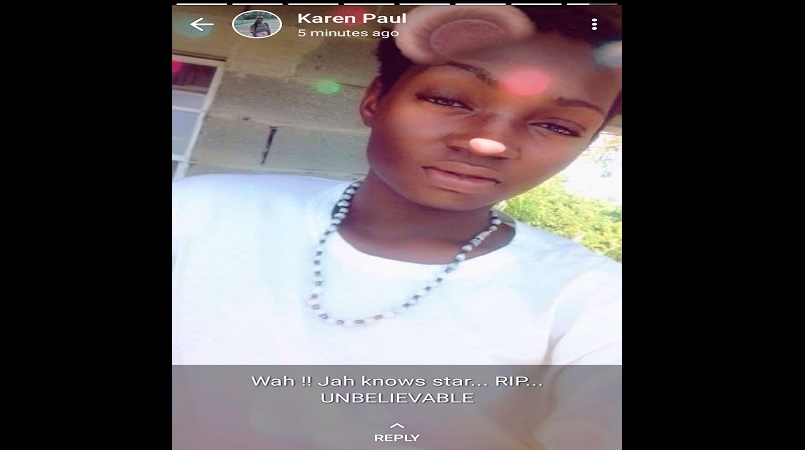 On the afternoon of Monday, March 25 news spread across Saint Lucia of a 16-year-old boy found dead, the cause of death to be suicide.

By the evening, screenshots of a private exchange via instant messenger circulated on social media. Appearing to be a goodbye message, the words seen in the screenshot are said to be from 16-year-old, Jervais Emmanuel, a resident of Rocky Lane, Dennery, and the reported suicide victim.

“What I'm doing is not right but I'm tired of hoping for a change…. I hope that god can forgive me for this and accept me with open arms for I only want the pain and heartache to go away...” the screenshots read. The message was shared in three photos and ended with, “Mom I love you and I'm sorry that I couldn't be the son you wanted… Bye.”

Emmanuel's friend who shared the screenshots on her Facebook page, included a personal caption reading in part, “Yesterday you were home, you showed me you were cutting your hands with the blade, I found it strange u were so quiet and moody… I can't say Rest in Peace cause I'm maddd at youuuuuuuuu, see what pressure does! He was gay and I accepted it! But y'all didn't!!” The girl's post garnered reactions and shares from hundreds from some expressing sympathy, others indignation at the circumstances leading to his death, and a few criticizers. 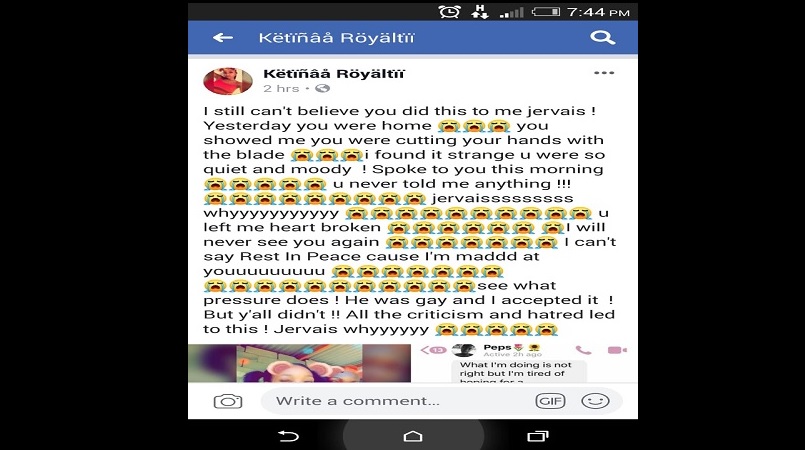 The incident has reignited conversation on homophobia in Saint Lucia and the poor treatment towards members of the island's LGBTQ community, by the general public. Popular, New York Based Makeup Artiste and media personality, Devonte Monerville, used his weekly live show on Facebook to say, “The worst thing is to be gay in Saint Lucia and to be an open gay. You have to be strong, and if you do not have the support of your family… You'll don't know the difference [it makes] hearing your family say 'no matter who you are I love and care about you'. These are the things we need as gay people.”

Monerville, who is openly gay, also shared that two weeks ago he had received a message from Emmanuel. “This young man reached out to me two weeks ago speaking to me about stuff that he's going through as a young, gay man growing up in Dennery.” Monerville said he had provided Emmanuel with his number and the two spoke briefly via whatsapp. “If he spoke to me, he spoke to you,” he added while urging friends and family of homosexuals and persons suffering from other emotional burdens to take hints and signs of distress seriously.

Monerville also implored Saint Lucians to address growing trends of cyber-bullying. He said, many people, many of which are girls, have reached out to him in a despondent state after having been the subject of cyber-bullying.

Emmanuel, who one acquaintance said had referred to 2019 as “his year”, is being remembered amongst his peers as having an outgoing, infectiously positive personality and seemingly strong demeanor—having had to stand up to bullies on several occasions.

A week before his death, Emmanuel shared this poem online: 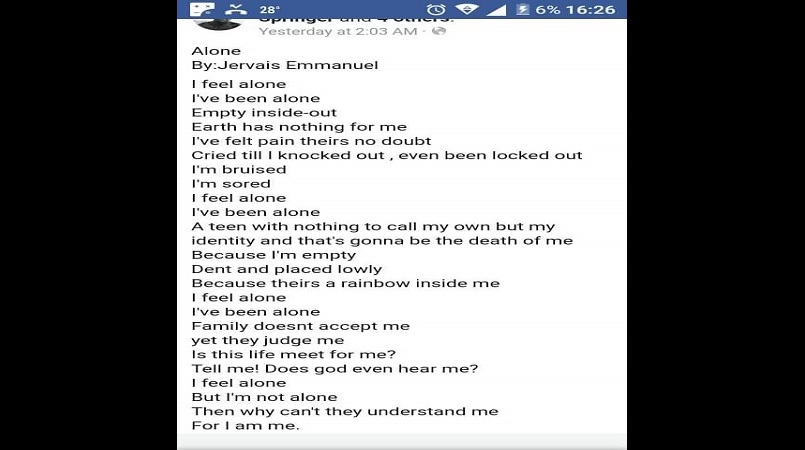 Local police say they are investigating the incident.

Jail sought for US woman who encouraged her boyfriend's suicide

PAHO supporting Latin America & the Caribbean in fight against COVID