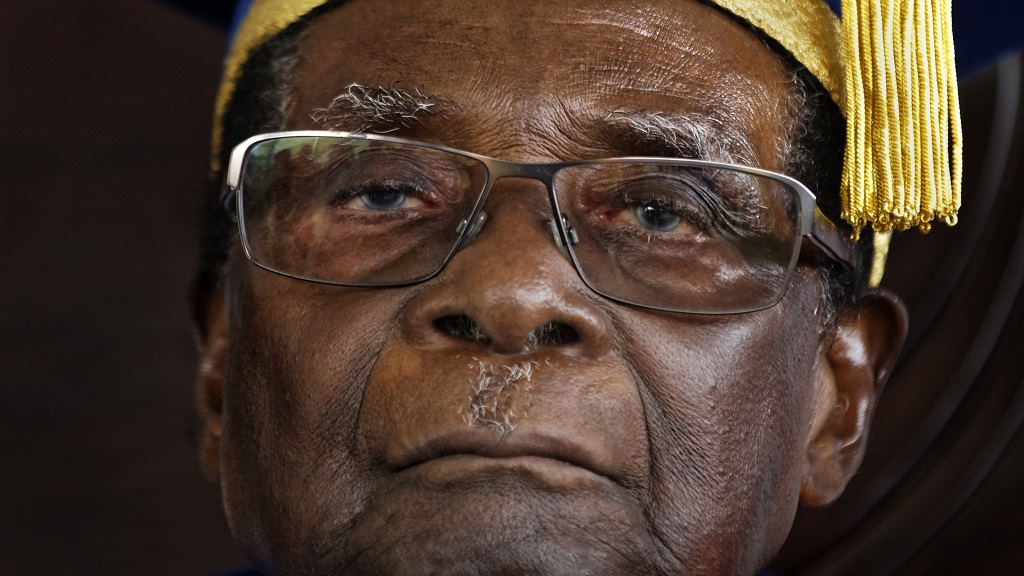 Robert Mugabe, the former leader of Zimbabwe forced to resign in 2017 after a 37-year rule whose early promise was eroded by economic turmoil, disputed elections and human rights violations, has died in Singapore. He was 95.

His successor President Emmerson Mnangagwa confirmed Mugabe's death in a tweet Friday, mourning him as an "icon of liberation." He did not provide details.

"Cde (Comrade) Mugabe was an icon of liberation, a pan-Africanist who dedicated his life to the emancipation and empowerment of his people. His contribution to the history of our nation and continent will never be forgotten. May his soul rest in eternal peace," Mnangagwa said.

South African President Cyril Ramaphosa confirmed that Mugabe died in Singapore in a statement sending condolences on behalf of the government and people of South Africa.

Ramaphosa said Zimbabwe's first post-independence president was "a liberation fighter and champion of Africa's cause against colonialism." 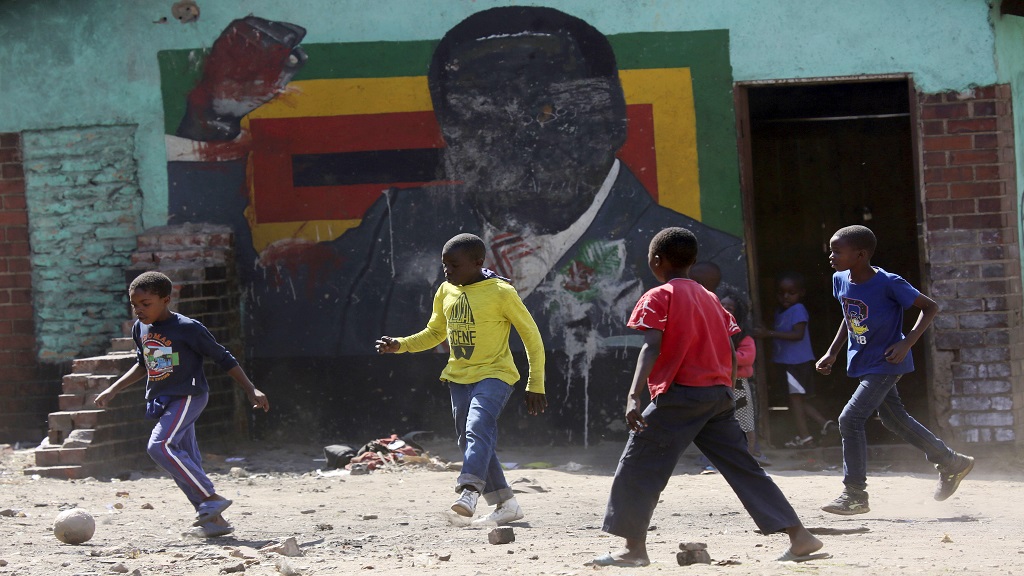 He added: "Under President Mugabe's leadership, Zimbabwe's sustained and valiant struggle against colonialism inspired our own struggle against apartheid and built in us the hope that one day South Africa too would be free."

Mugabe, who took power after white minority rule ended in 1980, blamed Zimbabwe's economic problems on international sanctions and once said he wanted to rule for life. But growing discontent about the southern African country's fractured leadership and other problems prompted a military intervention, impeachment proceedings by the parliament and large street demonstrations for his removal.

The announcement of Mugabe's Nov. 21, 2017 resignation after he initially ignored escalating calls to quit triggered wild celebrations in the streets of the capital, Harare. Well into the night, cars honked and people danced and sang in a spectacle of free expression that would have been impossible during his years in power and reflected hopes for a better future.

On the streets in the capital, Harare, on Friday people gathered in small groups sharing the news.

"I will not shed a tear, not for that cruel man," said Tariro Makena, a street vendor. "All these problems, he started them and people now want us to pretend it never happened." 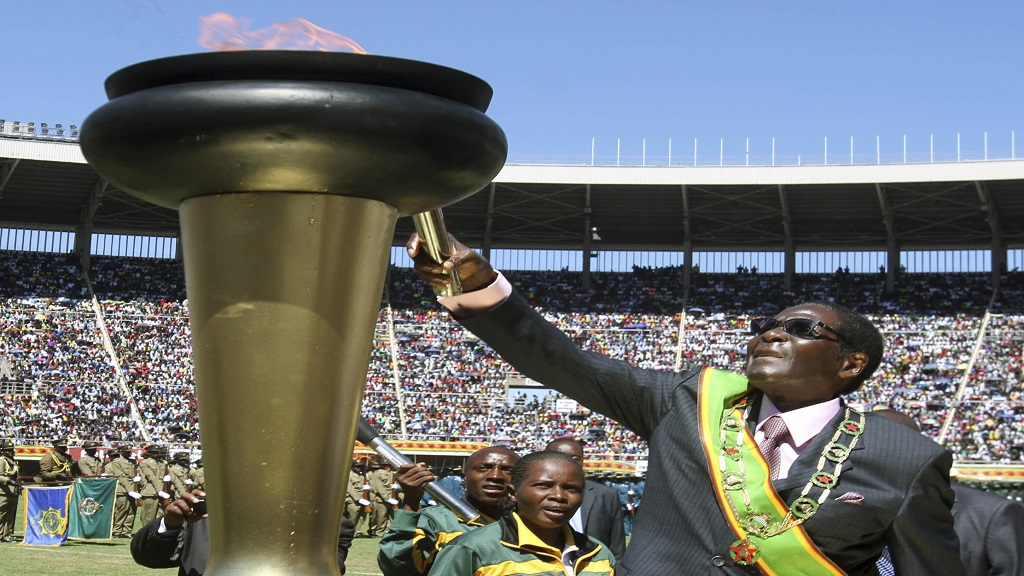 In this Wednesday, April 18, 2012, AP file photo Zimbabwe President Robert Mugabe, lights a flame at celebrations to mark 32 years of independence of Zimbabwe, in Harare.

Others said they missed him.

"Things are worse now. Life was not that good but it was never this bad. These people who removed him from power have no clue whatsoever," said Silas Marongo, holding an axe and joining men and women cutting a tree for firewood in suburban Harare to beat severe electricity shortages that underline the worsening economic situation.

Mugabe in recent years had received treatment at Gleneagles Hospital in the wealthy Southeast Asian city-state of Singapore. The hospital would not confirm that he was being treated there at the time of his death.

The hospital's parent company, Parkway Pantai, said in an emailed statement that it could not provide details "out of respect for the privacy of Mr Mugabe and his family."

Zimbabwe's liberation movement helped South Africa's struggle against apartheid, and its members were brutalized because of that, Ramaphosa said. 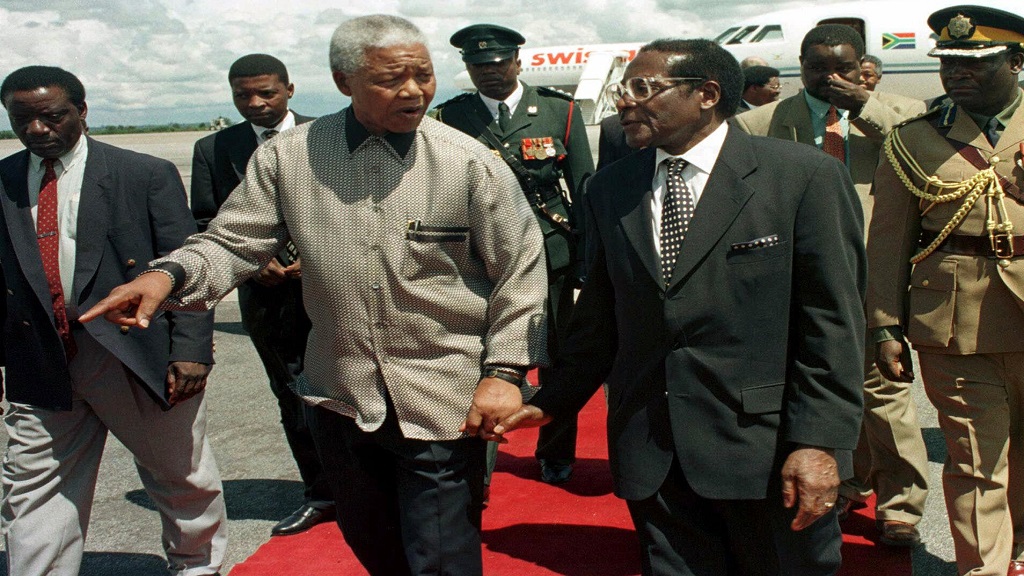 "Many Zimbabweans paid with their lives so that we could be free. We will never forget or dishonor this sacrifice and solidarity," he said.

On Feb. 21, 2018, Mugabe marked his first birthday since his resignation in near solitude, far from the lavish affairs of past years. While the government that removed him with military assistance had declared his birthday as a national holiday, his successor and former deputy Mnangagwa did not mention him in a televised speech on the day.

Mugabe's decline in his last years as president was partly linked to the political ambitions of his wife, Grace, a brash, divisive figure whose ruling party faction eventually lost out in a power struggle with supporters of Mnangagwa, who was close to the military.

Despite Zimbabwe's decline during his rule, Mugabe remained defiant, railing against the West for what he called its neo-colonialist attitude and urging Africans to take control of their resources — a populist message that was often a hit even as many nations on the continent shed the strongman model and moved toward democracy. 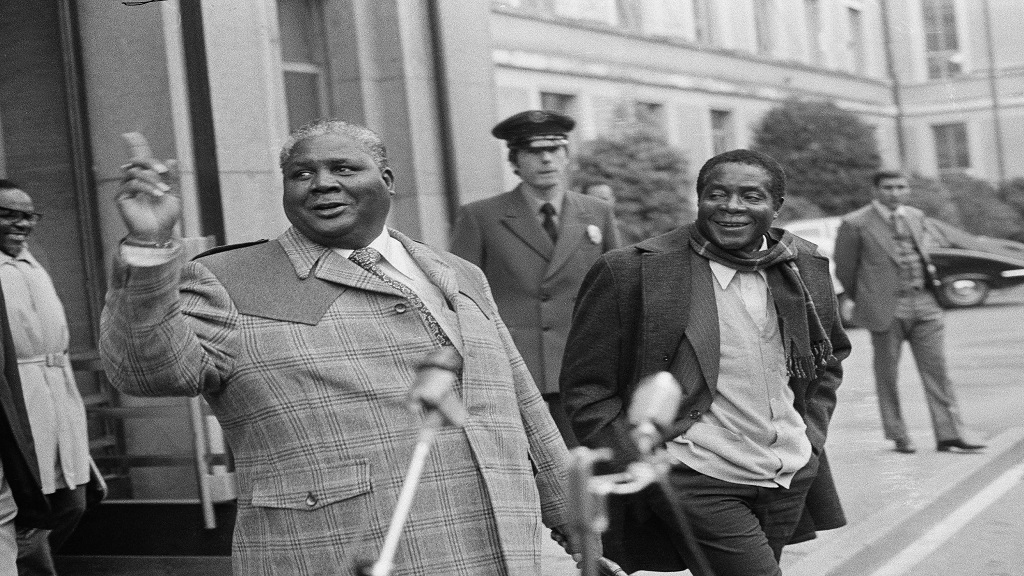 In this Wednesday, November 10, 1976 file photo, leaders of the Black National Front Joshua Nkomo, left, and Robert Mugabe make a no progress statement after their informal meeting with British chairman Ivor Richard at the Palais of Nations, Geneva, Switzerland.

Mugabe enjoyed acceptance among peers in Africa who chose not to judge him in the same way as Britain, the United States and other Western detractors. Toward the end of his rule, he served as rotating chairman of the 54-nation African Union and the 15-nation Southern African Development Community.

His criticism of the International Criminal Court was welcomed by regional leaders who also thought it was being unfairly used to target Africans.

"They are the ones who say they gave Christianity to Africa," Mugabe said of the West during a visit to South Africa. "We say: 'We came, we saw and we were conquered.'"

Many in South Africa remembered Mugabe for having stood up to the British.

Spry in his impeccably tailored suits, Mugabe as leader maintained a schedule of events and international travel that defied his advancing age, though signs of weariness mounted toward the end. He fell after stepping off a plane in Zimbabwe, read the wrong speech at the opening of parliament and appeared to be dozing during a news conference in Japan. However, his longevity and frequently dashed rumors of ill health delighted supporters and infuriated opponents who had sardonically predicted he would live forever.

"Do you want me to punch you to the floor to realize I am still there?" Mugabe told an interviewer from state television who asked him in early 2016 about retirement plans.

After independence, Mugabe reached out to whites after a long war between black guerrillas and the white rulers of Rhodesia, as Zimbabwe was known. He stressed education and built new schools. Tourism and mining flourished and Zimbabwe was a regional breadbasket.

However, a brutal military campaign waged against an uprising in western Matabeleland province that ended in 1987 augured a bitter turn in Zimbabwe's fortunes. As the years went by, Mugabe was widely accused of hanging onto power through violence and vote fraud, notably in a 2008 election that led to a troubled coalition government after regional mediators intervened.

"I have many degrees in violence," Mugabe once boasted on a campaign trail, raising his fist. "You see this fist, it can smash your face."

Mugabe was re-elected in 2013 in another election marred by alleged irregularities, though he dismissed his critics as sore losers.

Amid the political turmoil, the economy of Zimbabwe, traditionally rich in agriculture and minerals, was deteriorating. Factories were closing, unemployment was rising and the country abandoned its currency for the US dollar in 2009 because of hyperinflation.

The economic problems are often traced to the violent seizures of thousands of white-owned farms that began around 2000. Land reform was supposed to take much of the country's most fertile land — owned by about 4,500 white descendants of mainly British and South African colonial-era settlers — and redistribute it to poor blacks. Instead, Mugabe gave prime farms to ruling party leaders, party loyalists, security chiefs, relatives and cronies.

Mugabe was born in Zvimba, 60 kilometers (40 miles) west of the capital of Harare. As a child, he tended his grandfather's cattle and goats, fished for bream in muddy water holes, played football and "boxed a lot," as he recalled later.

Mugabe lacked the easy charisma of Nelson Mandela, the anti-apartheid leader and contemporary who became South Africa's first black president in 1994 after reconciling with its former white rulers. But he drew admirers in some quarters for taking a hard line with the West, and he could be disarming despite his sometimes harsh demeanor.

"The gift of politicians is never to stop speaking until the people say, 'Ah, we are tired,'" he said at a 2015 news conference. "You are now tired. I say thank you."

A year after Mugabe's fall from power, little has changed for Zimbabwe

After Mugabe, Africa's other longtime leaders feel a chill