Ronaldo responds to award reports by leading Juventus to win 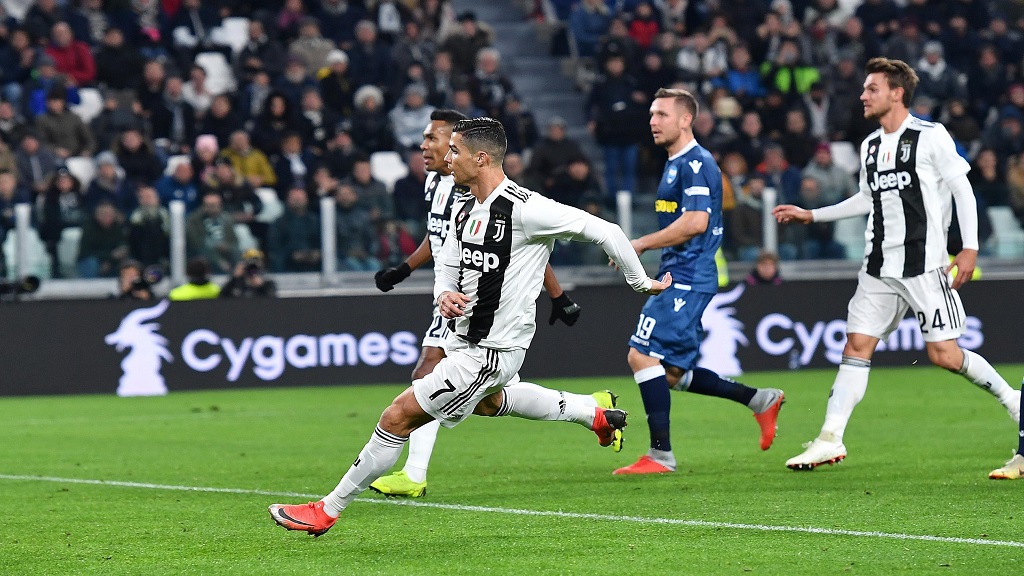 Nothing seems to motivate Cristiano Ronaldo more than the suggestion that other players are better than him.

That was evident when Ronaldo skipped the UEFA player of the year award ceremony in August when he learned that former Real Madrid teammate Luka Modric gained the honor.

Now, amid reports that he's been left off the podium for the Ballon d'Or prize to be presented next month, teammates say Ronaldo trained harder than ever this week.

The training paid off, as Ronaldo scored the opening goal and helped set up the second as Juventus extended their unbeaten start in Serie A by beating promoted Spal 2-0 on Saturday.

Croatia international Modric and France teammates Kylian Mbappe Raphael Varane are reportedly the finalists for the Ballon d'Or — which would mean that panelists relied heavily on the World Cup, where France beat Croatia for the title.

Before transferring to Juventus, Ronaldo helped Real Madrid to their third straight Champions League title last season, and led the competition with 15 goals — five more than anyone else.

Ronaldo's latest score gave him nine in Serie A, matching Genoa's Krzysztof Piatek for tops in the league.

Near the half-hour mark, Ronaldo beat everyone to redirect in a free kick from Miralem Pjanic.

In the 60th, Ronaldo's pull back on a counterattack set up a shot for Douglas Costa, whose effort was swatted into the path of Mario Mandzukic, who scored from the rebound.

"Ronaldo is a step ahead of his opponents," Juventus coach Massimiliano Allegri said. "On the second goal, as soon as he gained control he knew that he was going to pull it back to Douglas Costa."

All players, coaches and referees had red marks painted on their faces as part of a Serie A campaign to combat violence against women.

Kathryn Mayorga filed a civil lawsuit in September in Nevada claiming Ronaldo raped her in his Las Vegas hotel room in 2009. Police reopened an investigation into the allegation at her request. Ronaldo has denied any wrongdoing.

Keita Balde scored twice and set up another goal as Inter Milan beat visiting Frosinone 3-0 to move level on points with Napoli.

Ten minutes in at the San Siro, Keita evaded two defenders with a series of fakes before scoring from inside the area.

Lautaro Martinez doubled the advantage near the hour mark by heading in a cross from Keita, then Keita found the target again after being set up by Matteo Politano.

On loan from Monaco, Keita hadn't scored before for Inter.

Roma's lack of consistency was highlighted in a 1-0 loss at relegation-threatened Udinese.

It was the third time this season Roma lost to a team near the bottom of the standings, beside Bologna and Spal.

It wasn't the buildup Roma wanted ahead of a visit by Real Madrid in the Champions League on Tuesday. However, Madrid struggled even more on Saturday, losing at Eibar 3-0 in the Spanish league.

In Udine, Rodrigo De Paul collected a backheel pass from Ignacio Pussetto and chipped over onrushing Roma goalkeeper Antonio Mirante early in the second half.

Roma controlled 77 percent of the possession in the first half.

"A team that dominated for an hour has to score a goal. It has to," Roma coach Eusebio Di Francesco said. "A team that wants to become big and strong has to make that level of possession and pressure count. That's what makes me angry. Evidently we haven't matured enough yet."

Roma had beaten Udinese in all 10 of their previous meetings. What's more, Udinese hadn't won in more than two months.