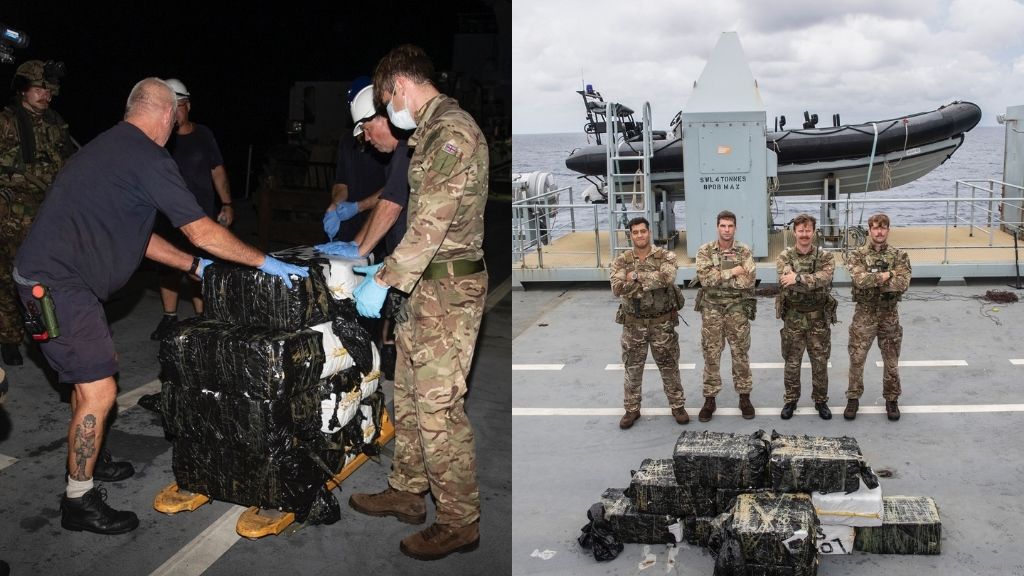 A Royal Navy task group has landed a triple blow to drug traffickers in the Caribbean after seizing 11 bales of cocaine worth £81 million in street value, destined for Britain’s streets.

The two British vessels involved in the bust, HMS Medway and Royal Fleet Auxiliary ship Argus, are the ships provided to the Caribbean region by the UK to provide Humanitarian Aid and Disaster Relief support but they also work with the US Coast Guard, as in this operation,  to carry out maritime security and counter-narcotic patrols.

These vessels assisted Cayman with helicopter cover in June whilst the RCIPS aircrafts were being serviced and also supported the hurricane exercise at Colliers Beach.

Sailors, Royal Marines and the US Coast Guard team on board support ship RFA Argus hauled 11 bales of cocaine weighing 358 kilogrammes in the first of three busts in seven days.

New patrol ship HMS Medway and her US Coast Guard team followed that up by catching traffickers in two interceptions inside 24 hours in the Caribbean Sea, which saw 650 kilograms of cocaine seized, never to reach the streets.

The combined haul of the British and American teams is worth £81m, according to figures calculated by the National Crime Agency.

Commanding Officer of HMS Medway, Lieutenant Commander Jim Blythe, said: “The Royal Navy and the US Coast Guard have prevented a significant quantity of drugs crossing the Caribbean, where possibly it was destined for the streets of the UK. It is testament to my ship’s company, along with the Coast Guard, that we have captured such a large amount of drugs and smugglers in such a short space of time. They have done themselves, their families and the country proud. This marks the start of what will hopefully be many interdiction operations as we continue to operate in the Caribbean over the next few years.”

RFA Argus’s Operations Officer added, “Argus’s crew showed perseverance and ingenuity to stop the trafficking of illegal drugs. RFA Argus has shown to be a very capable asset in these operations.”

Minister for the Armed Forces James Heappey said: “The Royal Navy task group deployed to support our overseas territories during the Covid-19 pandemic. They stayed in the Caribbean to respond to damage caused by hurricanes and now they’re making drugs busts alongside our friends in the US Coastguard."

“This is amazing work from our people after months away from home.”

In the first success, an American maritime patrol aircraft spotted a suspicious vessel riding low in the water and reported it to Argus, which immediately changed course to investigate.

The 28,000-tonne vessel used squalls as cover to stay out of sight and avoid raising suspicion – while her boarding team of Royal Marines from 47 Commando and the US Coast Guard prepared to strike.

On approaching the target craft, the Royal Marines were spotted and the suspect vessel’s crew started to throw their illegal cargo overboard.

A spokesperson for 47 Commando’s 539 Raiding Squadron, said: “Some patches of heavy rain had hidden Argus from sight in the distance and we were closing in unseen. When we were one mile off they saw us and started to run for it. We gave chase."

“We could see people on board throwing packages into the sea. This is important evidence, so we had to stop and collect one. The rest were picked up later. We then continued the chase and managed to catch the vessel."

“I am really pleased that all the hard work paid off. It was a team effort, and I am particularly proud of my team for the long hours they put in on the water.”

The crew of the intercepted vessel were brought back to RFA Argus along with their seized cargo before being transferred to US Coast Guard cutter Spencer.

Their boat was subsequently sunk by soldiers from 24 Commando Royal Engineers.

Sixteen bales of cocaine and three detainees were captured in the first boarding, which saw Medway catch up with the suspect craft from 45 miles out.

Just one day later more information was fed to Medway and she gave chase to another craft, landing a further nine bales and three more detainees.

Those detainees and the seized drugs have now been handed over to US authorities allowing Medway to resume patrols of the region.

RFA Argus and Medway are deployed to the Caribbean as part of a Royal Navy task group. They are in the region to support island communities during hurricane season, but also to carry out maritime security and counter-narcotics operations. 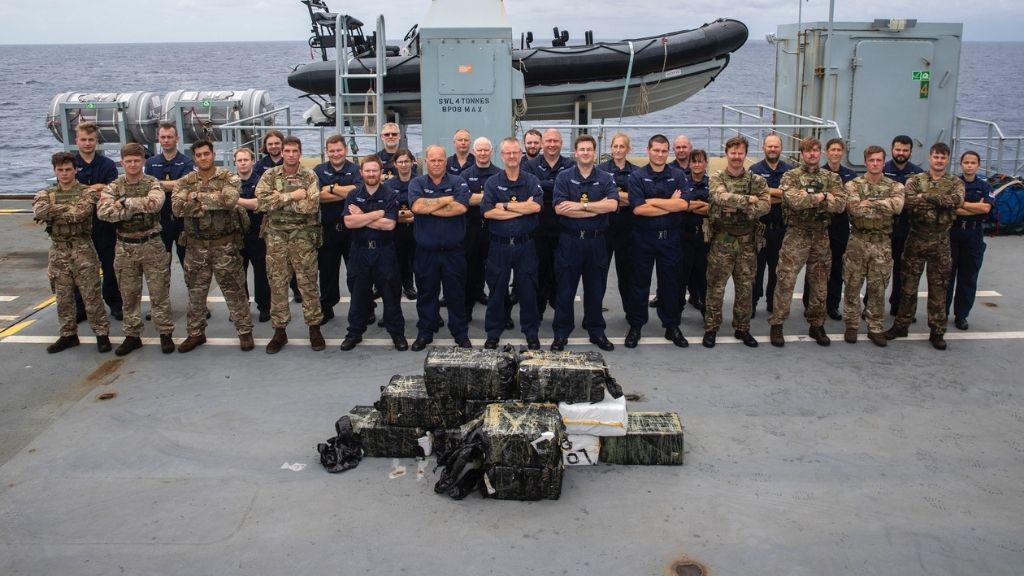 The UK works in partnership with allied nations in the region as part of the Joint Interagency Task Force South, which detects and monitors activity to support security operations from their base in Florida.