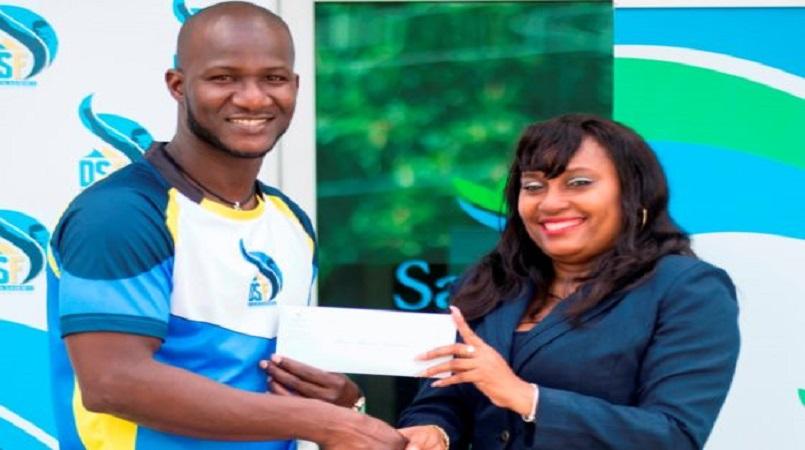 Former West Indies cricket captain Daren Sammy is batting for underprivileged children in his native St. Lucia and would also like to do so in other Caribbean territories.

Following the official launch of the Darren Sammy Foundation (DSF) in Castries last  August,  the international cricketer was recently presented with corporate  support for his charitable project by the Barbados-based Sagicor General Insurance.

Through executives in St. Lucia, the regional insurance company  last week donated funds to the DSF and Sammy was on hand to personally express his appreciation to the company.

“I am  happy that Sagicor General has come on board to support the Foundation and our goals and objectives …this is a very worthy cause and  I am also thankful for this kind of  support in these challenging times,” said Sammy.

Executives of Sagicor General said they were proud to partner Darren Sammy and the DSF in such a worthy project and also assist in building a stronger community.

“Sagicor has a good track record in supporting the communities in which we operate and we are proud to be on board with the Darren Sammy Foundation,” said Gillian Polius, Administrator  of  Sagicor General in St. Lucia.

Sammy, the first St. Lucian to play test cricket for West Indies and who captained the regional side to T20 World Cup titles in 2012 and 2016,  disclosed that the creation of the DSF was his way of giving back to the community.

So far  10 under-privileged children, between the ages of  9 to 13 from  across St. Lucia , have been awarded scholarships under the DSF project which will  assist them in fulfilling their educational and sporting dreams.

Mentors , Sammy said,  have been assigned to each of the children and , along with representatives of the DSF, they will  pay personal attention to their charges and inter-face with  parents and teachers.

“Others paid attention and assisted me when I was growing up and helped me on the right path.  It is not only about sports, I am big on education and I have a passion for assisting young people. Hopefully someday I can do more to benefit other Caribbean children,” said Sammy.

The motto of the DSF   is – “Once you Can Imagine and Believe, You Can Achieve”.