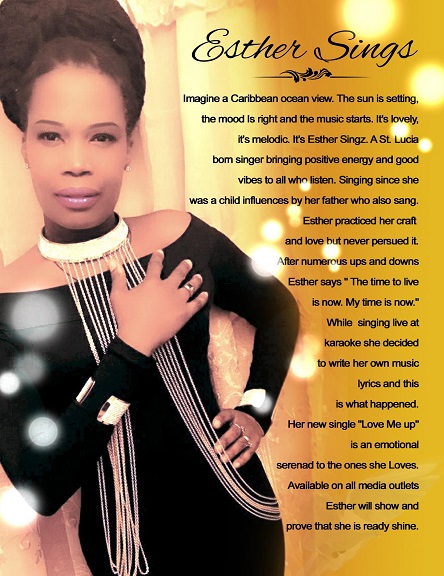 She has a rather unique name as a singer and the passion she brings to her music is deep. When she sings, she seems lost to everything around her but the music.

She goes by the name of Esther Sings and she is a Saint Lucian, a mother and singer with at least three monster tunes under her belt.

Meet Esther Antoine who, as a girl, loved to sing and now, as a woman, has taken that love for singing several steps further by writing and singing her own songs.

But she is not just singing them quietly to herself. From the several public appearances she has made in New York City, Esther Sings is now focussing on launching herself globally and she plans never to be defeated in achieving that goal.

Currently working on a full-length album, she is letting the world know of her strength as a singer and songwriter, releasing three reggae tunes that shows off her style, voice range, song writing skills and emotional attachment to her work.

“I’m a reggae artiste, my aim is to develop into a recognized singer/entertainer on the reggae landscape of the world,” she told Loop News exclusively from her home in New York.

Esther began singing at the age of five, mostly in church, and by the time she was 18 she was rocking venues in her home country as the lead singer in music bands.

She explained that as a budding singer in Saint Lucia she sang all genres of music but reggae had a special appeal to her.

“Reggae does something to me. It gets way down in my soul and puts me in a different mindset. I love reggae, I love everything about reggae. I am more comfortable with reggae,” she said, adding that it was her father who influenced her into pursuing a music career.

“After numerous ups and downs, I decided that I should indeed pursue my interest in music. The idea that I should write my own songs came about during a karaoke session."

Esther has since written three songs entitled ‘Love U Up’, ‘Do My Best’ and ‘Cease Fire’, songs she says reflect her outlook on life and matters of the heart. She is under the label African Voice Productions. She is currently on a promotional drive with her songs while at the same time working on an album.

Her songs get heavy rotation on radio stations in North America, Europe and the Caribbean. She plans to do much more in her chosen field when summer comes around, however in the meantime she encourages everyone to cherish the life they have, give glory to Almighty God through whom all blessings flow and never give up on their dreams.

Reggae Sumfest launches in T&T, soca to get main stage spot in 2020