Saint Lucia’s Pearl of the Caribbean to transform the South 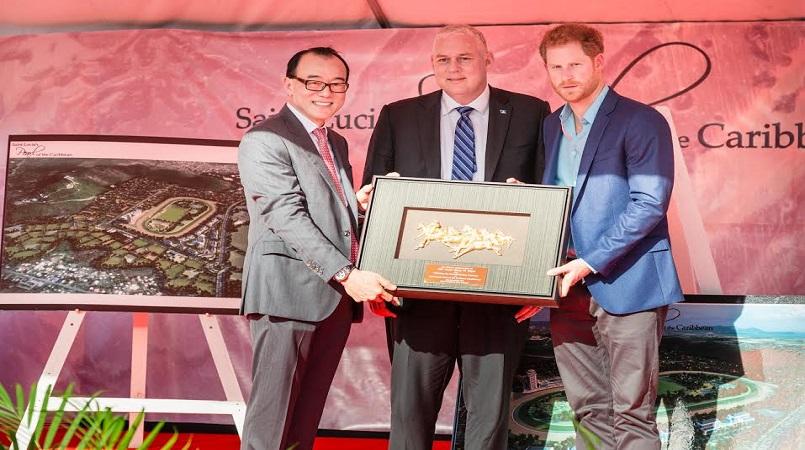 Saint Lucia is poised for significant advances in our tourism product and business environment thanks to Saint Lucia’s Pearl of the Caribbean which is expected to commence construction in 2017.

The southern-based project, estimated to cost about $2-billion, is a fully integrated equestrian oriented development which will encompass the Royal Saint Lucia Turf Club and its expected world class horse racing, and related entertainment, leisure and accommodation amenities.

At a sod-turning ceremony on Friday November 25th 2016 there were several announcements made on the impact of the project and the unique opportunities it brings.

There were stunning artist renderings of the project and presentations were made to His Royal Highness who also took part in the turning of the sod.

Speaking at the event Mr. Teo Ah Khing said: “St Lucia’s Pearl of the Caribbean is a project that will be constructed with the people and for the people. It will drive new opportunities across the nation in established industries like international tourism, business, leisure, retail, digital media and real estate. It will create a new equine industry with the building of a state of the art race course.”

Mr Khing thanked Prince Henry of Wales for taking the time to witness the sod turning, while he continued to speak of the benefits of the project to Saint Lucia: “DSH Caribbean Star brings with it a proven track record of delivering upon the visions of the government. It is a record we are proud to stand by. We believe Saint Lucia’s Pearl of the Caribbean will spearhead a momentum to move this country forward in line with the government’s vision that St Lucia will truly become a premium tourism destination of the world.”

To the people of St Lucia, we at DSH Caribbean Star share the enthusiasm to promote the very best virtue of this country. We want the Pearl of the Caribbean to connect the people from all around the world to Saint Lucia.”

For his part Prime Minister Allen Chastanet described the project as “bold, courageous and different.”

“The horse racing track is just the beginning,” said the Prime Minister. “There are also the jobs that will be created for the multitude of young people, particularly here in the south. When you see the rich history of horse riding in St Lucia you see the love of horses. You see the young men as entrepreneurs on the beach getting tourists to ride their
horses. This is going to create an opportunity for them to become professionals, an opportunity for them to become world class.”

The Prime Minister spoke of the potential for development in Vieux Fort and surrounding areas: “We have a world class deep water harbour, international airport and over 10,000 acres of undeveloped flat land. There is nowhere in the Caribbean where that opportunity exists better than it exists here in Vieux Fort.

“We intend to make sure that the first international horse racing event will take place here by next November!” he announced as he also spoke of other development initiatives for the south including a cruise ship terminal and the redevelopment of the Hewannora International Airport.

CEO of Invest Saint Lucia, Mr. Mc Hale Andrew spoke specifically about the time frame and status of the project as he explained that over the next few months, “subject to full planning approval, we are poised to witness the transformation of the south.”

The CEO addressed environmental concerns: “Let me reiterate that the protected and environmentally sensitive Mankôté Mangrove has, by mutual agreement, been excluded from the scope of this project. Let me also reassure all of Saint Lucia that while DSH has received the Development Control Authority’s approval in principle, this by no means constitutes permission to commence construction. With a project of this magnitude, you would appreciate that there are, and will continue to be, a number of obligatory processes along the project implementation continuum that must be satisfied prior to the actual commencement of construction.”

Andrew went on to explain: “We are now at the stage where this project, despite the fact that it has not yet received CIP approval, is forging ahead to fully fund, through the developer’s equity, the construction of the horse racing track. It is anticipated that, subject to satisfaction of the stipulated requirements, CIP approval will be forthcoming in the desirable time frame and will help to finance the remainder of the project.”

Andrew ended by stating: “Invest Saint Lucia is proud to be associated with Desert Star Holdings Ltd. and is satisfied that this investment will be a key driver for the south and a catalyst for further investments throughout the island.”

For his part Minister with responsibility for Tourism Honourable Dominic Fedee gave an overall vision for the Tourism industry in Saint Lucia and commended DSH for its commitment to Saint Lucia.