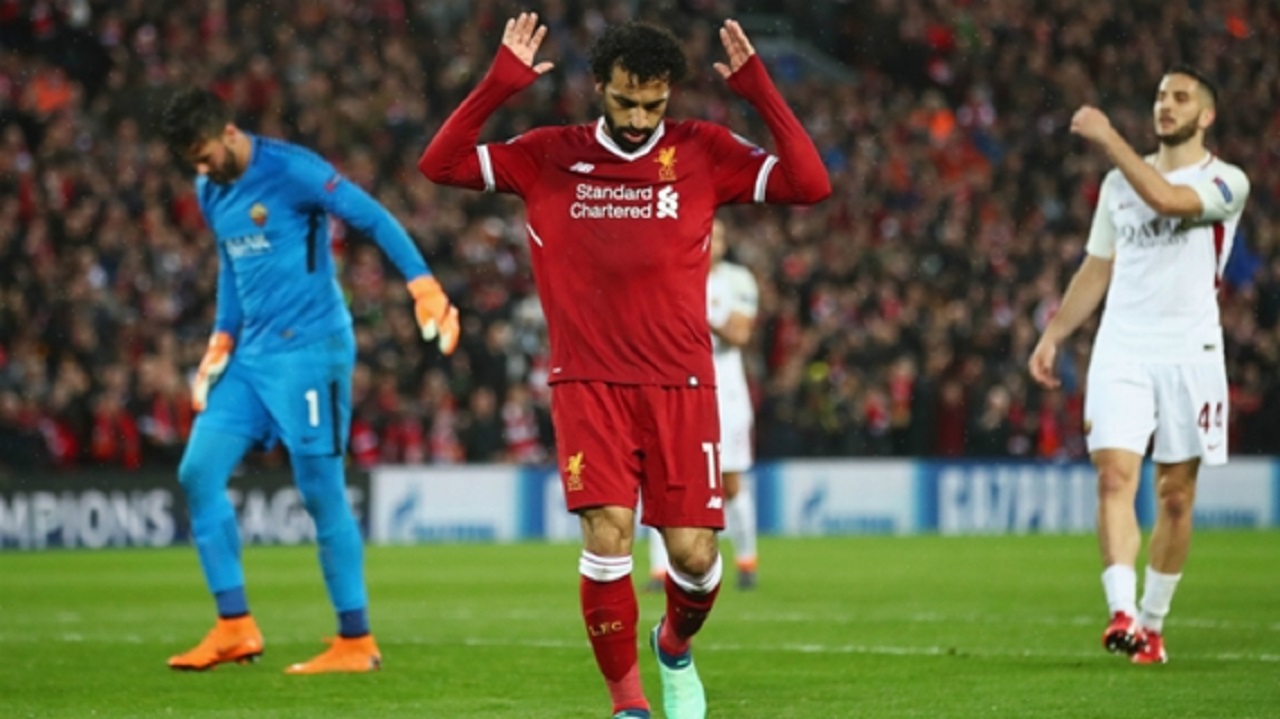 Mohamed Salah produced two world-class finishes and set up goals for Sadio Mane and Roberto Firmino to lead Liverpool to a 5-2 win over former club Roma on Tuesday, leaving the English team in sight of the Champions League final.

Salah's display was as exquisite as Roma's defending was naive, with Liverpool scoring all of their goals in a breathtaking 33-minute spell either side of halftime amid a cauldron of noise at Anfield.

The Italian side came back from a 4-1 first-leg loss to Barcelona in the quarterfinals, and consolation goals in the final nine minutes from Edin Dzeko and Diego Perotti has given them a similar deficit to overcome.

In the latest virtuoso performance of his stunning first season at Liverpool, Salah curled a shot into the top corner in the 36th minute and doubled the lead in the 45th with a dinked finish that is fast becoming his trademark. He is now on 43 goals for the season in all competitions with potentially five games left.

The Egypt forward wasn't finished there, taking advantage of Roma's high defensive line to provide crosses for Mane and Firmino to score almost identical goals in the 56th and 61st minutes, respectively.

Firmino glanced home a header from James Millner's corner in the 69th to leave Roma's players on the floor — literally in the case of their distressed goalkeeper, Alisson.

Liverpool moved onto 38 goals for this season's competition — 11 more than any other team — but cannot begin preparing for the final in Kiev on May 26 quite yet.

Dzeko chested down a long pass to make it 5-1 in the 81st and when Milner handled a shot from Radja Nainggolan, Perotti converted the penalty in the 89th.

Bayern Munich play Real Madrid in the other semifinal, with the first leg in Germany on Wednesday.

Roma know all about Salah, who scored 15 goals and set up 11 more in the second of his two seasons at the Italian club before joining Liverpool for 42 million euros (then $47 million) in June.

He's obliterating those figures at Anfield this season. His double saw him surge past Cristiano Ronaldo's 42 goals for Manchester United in the 2007-08 season, for example.

Salah won English soccer's Player of the Year award on Sunday. At this rate, the Ballon D'Or could be his next year.

His first goal came after Dzeko gave up possession cheaply in Liverpool's half. The ball made its way to Salah, who cut inside from the right edge of the penalty area and curled a shot in off the crossbar, near to the post. It couldn't have been placed any better.

If that was a typical Salah finish from his first half of the season, his second goal was a replica of a couple of his recent strikes in the Premier League.

Roberto Firmino timed his through ball perfectly and Salah outpaced Juan Jesus before applying a dinked finish over Alisson, just like he did to eliminate Manchester City in the quarterfinals.

Salah didn't celebrate either of his goals out of respect for his former teammates but he made them suffer by setting up goals for the other members of Liverpool's devastating forward line.

And when Firmino nodded in Liverpool's fifth goal, the semifinal looked over with 110 minutes remaining.

However, Liverpool manager Juergen Klopp took off Salah in the 75th minute and Roma suddenly began to swarm all over the home side.

A three-goal deficit will not scare Roma's players — just look at what they did to Barcelona in the Stadio Olimpico two weeks ago. Yet, Liverpool failing to score is unlikely on the evidence of this season, particularly the first 69 minutes of this game at Anfield.

Salah nets 40th of season in Liverpool win vs Bournemouth