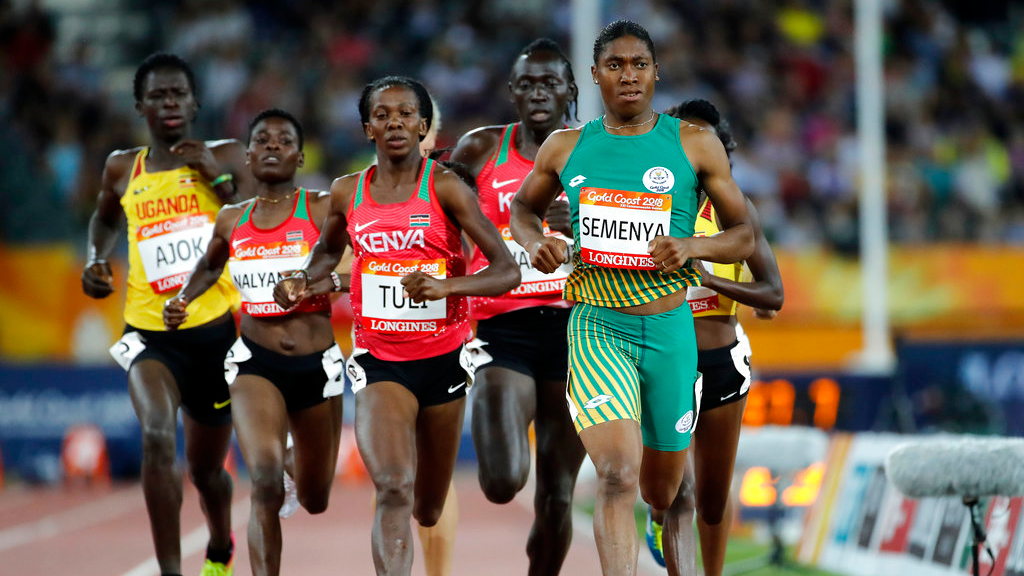 Caster Semenya's running future will be decided by three judges starting next week in a landmark case that will challenge science and gender politics.

The two-time Olympic 800-metre champion from South Africa is looking to overturn eligibility rules for hyperandrogenic athletes proposed by track and field's governing body. The IAAF wants to require women with naturally elevated testosterone to lower their levels by medication before being allowed to compete in world-class races from 400 metres to one mile.

"She looks forward to responding to the IAAF at the upcoming hearing," Semenya's lawyers in Johannesburg, Norton Rose Fulbright, said Thursday in a statement. "She asks that she be respected and treated like any other athlete: Her genetic gift should be celebrated, not discriminated against."

A scheduled five-day appeal case starting Monday is among the longest ever heard by the Court of Arbitration for Sport (CAS). The verdict, expected next month, could also be among the most ethically controversial in the sports court's 35-year history.

The panel of three CAS judges could decide based only on science: Can the IAAF prove women with Differences of Sexual Development (DSD) get a significant performance advantage from male levels of testosterone.

The IAAF insists no woman is being reclassified as male, and it "makes no judgment about gender or sexual identity."

"(The rules) are about levelling the playing field to ensure fair and meaningful competition in the sport of athletics where success is determined by talent, dedication and hard work rather than other contributing factors," IAAF president Sebastian Coe said last year.

As for the science, lawyers for Semenya will call expert witnesses from the United States and her native South Africa to discredit the IAAF's research. The evidence could help deliver a second loss for the IAAF at CAS on an issue that has flared for a decade and cast a shadow on Semenya's career.

In 2009, the 18-year-old prodigy won her first world championship title in the 800 metres, finishing in 1 minute, 55.45 seconds to become the third fastest woman this century. Hours before the race in Berlin, it emerged that the IAAF had asked for Semenya to undergo a gender verification test.

The IAAF introduced Hyperandrogenism Regulations in 2011 to replace the gender policy with guidance limiting women to serum levels of natural testosterone below 10 nanomoles per litre of blood. Semenya then finished second in the 800 at the 2012 London Olympics in 1:57.23, but was later upgraded to gold after the original winner was disqualified for doping.

The IAAF's regulations were later blocked by Indian sprinter Dutee Chand, who won a CAS verdict in 2015 . Three judges, including Canadian professor Richard McLaren, said the IAAF did not prove hyperandrogenic women gained a significant advantage and invited the governing body to submit new evidence.

While the rules were suspended, Semenya won a second Olympic title at the 2016 Rio de Janeiro Games in 1:55.28 — more than four seconds faster than her best times in the previous two seasons.

The IAAF published its research in a British medical journal in 2017, using data from athletes at the 2011 and 2013 world championships.

It claimed 7.1 in every 1,000 elite female athletes had elevated testosterone levels, 140 times higher than the general population. This helped give a supposed performance advantage of 1.8 to 4.5 percent in events from 400 to 1,500 metres.

The proposed solution was requiring women to medicate — likely with contraceptive pills — to bring testosterone levels below 5 nmol/L for at least six months before competing at elite events such as the Olympics, world championships or Diamond League meets.

"No athlete will be forced to undergo surgery," said IAAF medical adviser Stephane Bermon, who co-wrote the research.

CAS is hoping for a verdict in Semenya's appeal by March 26 — six months and two days before the 2019 world championships begin in Doha, Qatar.

"The IAAF remains very confident of the legal, scientific, and ethical bases for the regulations, and therefore fully expects the Court of Arbitration for Sport to reject these challenges," the governing body has said.

However, the integrity of the IAAF research has been challenged in a paper by three academics : Roger Pielke in the United States, Erik Boye in Norway and Ross Tucker in South Africa.

They claimed errors in the data included duplicate times for the same athlete, counting times for athletes later disqualified for doping, and "phantom" performances with no athlete recording that specific time.

"The unwillingness of the IAAF to correct or acknowledge errors highlights its conflict of interest," wrote the authors, saying it was "uncommon and unadvisable that IAAF sees its role as serving as both the regulatory body and the primary producer of evidence justifying its own proposed regulations."

Semenya's lawyers previously said the IAAF's rules are "irrational, unjustifiable" and violate the Olympic Charter and the laws of Monaco, where the governing body is based.

She is expected to attend some of the appeal sessions in Lausanne, Switzerland.

Victory next month would leave the defending champion favored to win a fourth 800 world title in Qatar.

A defeat in court would give Semenya options including leaving behind middle-distance events to focus on the 5,000, or start a six-month course of medication. That would mean skipping the entire Diamond League season to be eligible for the 800 at the world championships.

Commonwealth Games: Semenya rules on the track; Aussies in the pool