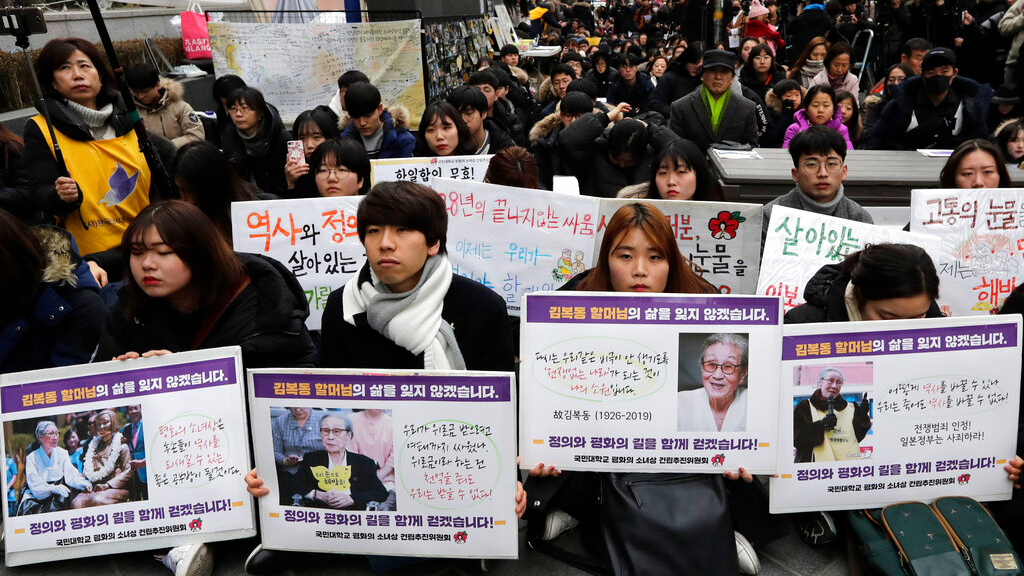 Participants hold pictures of the deceased Kim Bok-dong, one of the many former South Korean sex slaves who were forced to serve for the Japanese military in World War II, during a weekly rally near the Japanese Embassy in Seoul, South Korea, Wednesday, Jan. 30, 2019. (AP Photo/Lee Jin-man)

A South Korean woman who was forced as a girl into a brothel and sexually enslaved by the Japanese military during World War II was mourned Wednesday by hundreds of protesters who demanded reparations from Tokyo over wartime atrocities.

Kim Bok-dong had been a vocal leader at the rallies that have been held every Wednesday in Seoul for nearly 30 years. She died on Monday at a Seoul hospital where she had been receiving treatment for cancer. She was 92.

On a street near where the Japanese Embassy used to be, protesters gathered around a bronze statue of a girl representing Korean sexual slavery victims and held a moment of silence for Kim. Many of them held signboards with Kim's photos and words including, "We will never forget the life of Kim Bok-dong" and "Japanese government, apologise!"

Kim was one of the first victims to speak out and break decades of silence over Japan's wartime sexual slavery that experts say forced thousands of Asian women into front-line brothels. She traveled around the world testifying about her experience, including at the United Nations World Conference on Human Rights in 1993 and at a U.N. Human Rights Council panel in 2016. Of the 239 Korean women who have come forward as victims, only 23 are still alive.

"We do not have much time left to spend with them," said Lee Seong-rim, one of the protesters, who said it would be "miraculous" if the Japanese government ever fully acknowledges accountability over the sexual slavery of Korean women.

South Korean President Moon Jae-in, who visited an altar set up for Kim at a Seoul hospital on Tuesday, said in a statement that Kim devoted her life to "restoring human dignity" and that her campaigning gave South Koreans a "braveness to face the truth."

According to Yoon Meehyang, who heads an activist group representing South Korean victims of Japan, Kim was dragged away from home at the age of 14 and forced to have sex with Japanese soldiers at military brothels in China, Hong Kong, Malaysia, Indonesia and Singapore from 1940 to 1945. She came forward as a victim in 1992, a year after Kim Hak-sun became the first South Korean woman to identify herself as a former sex slave.

"I am a victim of the Japanese military's comfort women system and I stand in front of the Japanese embassy every Wednesday fighting for the restoration of our honor and dignity, but I also know too well the pain of women all around the world who are currently suffering from wartime sexual violence," Kim Bok-dong said in 2012 as she launched the "Butterfly Fund" for helping victims of wartime sexual abuse with another former Korean sex slave, Gil Won-ok.

A 1991-1993 Japanese government investigation concluded that many of the women were recruited against their will, leading to a landmark Japanese apology. The investigation found no written proof in official documents, however, and conservatives in Japan have cited that in arguing the women were not coerced. Many South Koreans say past apologies didn't go far enough.

Kim's death comes as relations between South Korea and Japan have sunk to their lowest point in years over what South Korea says is Japan's refusal to fully acknowledge the suffering of the so-called "comfort women" during WWII and of forced Korean laborers during its colonial rule of the Korean Peninsula from 1910 through 1945.

Moon's government in November announced plans to dissolve a foundation founded by Japan to compensate South Korean sexual slavery victims, which if carried out would effectively kill a controversial 2015 agreement between the countries to settle a decades-long impasse over the issue.

Many in South Korea believed that Seoul's previous conservative government settled for far too less in a deal where Tokyo agreed to fund the foundation with 1 billion yen ($9 million). There's also criticism that Japan still hasn't acknowledged legal responsibility for atrocities during its colonial occupation of Korea.

Japan had said it didn't consider the money it provided to the fund as compensation, insisting that all wartime compensation issues were settled in a 1965 treaty that restored diplomatic ties between the countries and was accompanied by more than $800 million in economic aid and loans from Tokyo to Seoul.

Japan blasted Seoul's decision to walk back on the deal, with Foreign Minister Taro Kono saying Seoul was violating the "most basic rule to live in the international society."