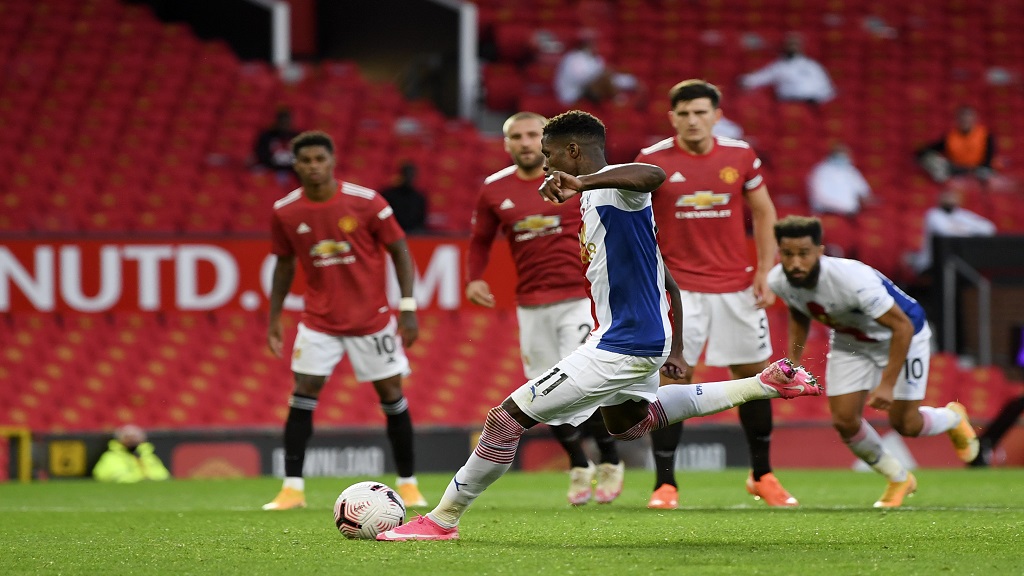 Manchester United were well off the pace in their first English Premier League (EPL) game of the season Saturday, losing 3-1 at home to Crystal Palace in a match featuring a converted retaken penalty following an intervention by VAR.

After a short and disjointed preseason, United’s players were sluggish throughout as Wilfried Zaha’s two second-half goals earned Palace a win at Old Trafford for a second straight season.

Zaha’s first goal came from the penalty spot after the referee ordered a spot kick to be retaken because of encroachment from United goalkeeper David de Gea before he saved an attempt by Jordan Ayew. De Gea didn’t have at least one foot on the goal line as Ayew struck his shot.

That made it 2-0 in the 74th minute and although Donny Van de Beek’s goal six minutes later gave United hope, Zaha shrugged off his marker before firing home Palace’s third goal in the 85th.

Andros Townsend put Palace ahead in the seventh minute.

United had barely a month between seasons after a late finish to the 2019-20 campaign owing to their involvement in the latter stages of the Europa League. The offseason has been troubled, too, with captain Harry Maguire getting arrested and being given a suspended 21-month sentence last month for assaulting a police officer and resisting arrest during an incident on the Greek island of Mykonos. Maguire has since filed an appeal against his conviction and will get a retrial on a date yet to be announced.

Mason Greenwood has also been training alone after being dropped from the England squad for breaching coronavirus rules by meeting up with women from outside the team bubble while the national team was in Iceland.

While Maguire started against Palace, Greenwood was on the bench and came on in the second half. Aaron Wan-Bissaka and Nemanja Matic were only deemed fit enough to start on the bench, too.

Paul Pogba, who contracted the coronavirus in the offseason, struggled with the intensity of the game and gave possession away repeatedly in the second half.

Earlier, Leeds were on the right end of a 4-3 thriller in the Premier League.

A week after losing at champion Liverpool by the same score line on the opening day of the season, Leeds were involved in another wild contest in their first home game back in the division and came out on top against fellow promoted team Fulham.

Helder Costa scored in each half for Leeds, the second goal proving to be the winner at an empty Elland Road for Marcelo Bielsa’s attack-minded side.

Fulham, which had two goals from striker Aleksandar Mitrovic, have now lost back-to-back games to open the season, having already been beaten 3-0 by Arsenal.

Between them, Leeds and Fulham have conceded 14 goals in four games so far. West Bromwich Albion, the other side promoted from the second-tier Championship for this season, have conceded eight.

In another game, Dominic Calvert-Lewin scored a hat trick and James Rodriguez netted his first goal in English football as Everton beat West Bromwich Albion 5-2 in an incident-filled  match featuring two red cards — including one for visiting manager Slaven Bilic.

It was Everton’s second straight win to open the season — Carlo Ancelotti’s side also beat Tottenham last weekend — and it looks a team transformed with Rodriguez in the playmaker role following his offseason move from Real Madrid.

Rumour Has It: Liverpool, Man U chase Sarr as Atletico consider Suarez