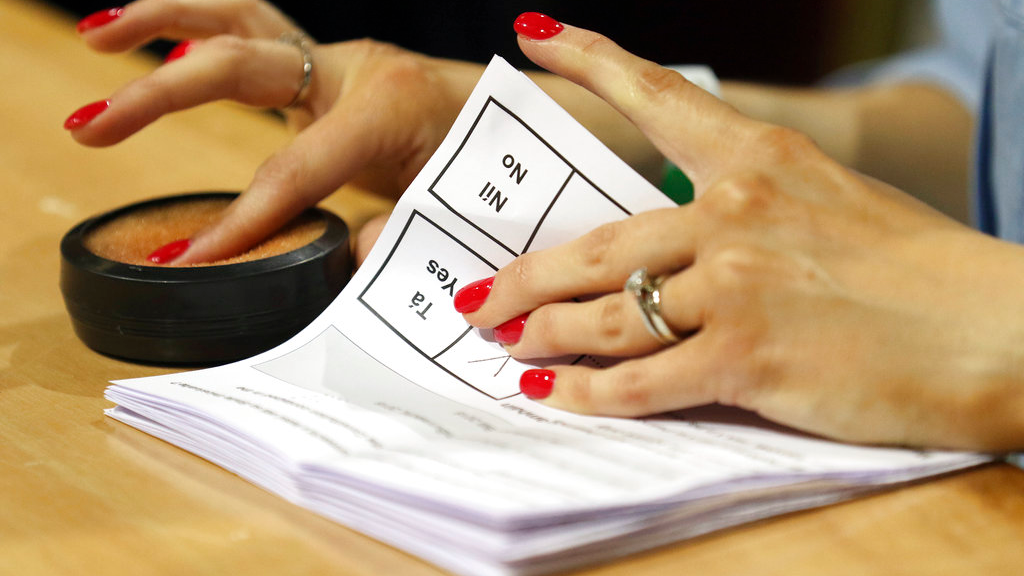 Counting of votes begins in the Irish referendum on the 8th Amendment of the Irish Constitution, in Dublin, Ireland, Saturday, May 26, 2018. Official counting began Saturday in Ireland's historic abortion rights referendum, with two exit polls predicting an overwhelming victory for those seeking to end the country's strict ban. (AP Photo/Peter Morrison)

Irish Catholics attending Sunday Mass were disappointed with the result of a referendum in which voters opted to legalize abortion and think it reflects the weakening of the Church — a situation that was unthinkable in Ireland a generation ago.

There was no mention of the referendum during the sermon at St. Mary's Pro Cathedral, but it was weighing heavily on the minds of some worshippers as they left the Mass in central Dublin.

Ireland voted by a roughly two-to-one margin Friday to end a constitutional ban on abortion, and parliament is expected to approve a more liberal set of laws governing the termination of pregnancies.

Some worshippers said the overwhelming victory of abortion rights activists seeking the repeal of the Eighth Amendment of the constitution reflects a weakening of the Catholic Church's historic influence and fills them with dread for Ireland's future.

"I think the 'yes' vote was an anti-Church vote," said Annemarie McCarrick, referring to the "yes" vote in favor of ending the constitutional ban.

The 52-year-old lecturer said on the cathedral steps that a series of sex abuse scandals had undermined the influence of the Church in Ireland. She said the Church had in recent weeks taken a "quiet" stand against repeal, but hadn't been able to sway people.

"I am religious but the Church has definitely lost influence here because of the scandals," she said. "The people will not take direction from the Church anymore. It's hard for the Church to have credibility."

Recent census figures show a small decline in the number of Catholics in Ireland, but it remains by far the dominant religion.

Frank Gaynor, a 75-year-old retiree, said after the Mass that he never imagined the vote in favor of abortion rights would be so lopsided.

He said he was troubled by the way the "yes" campaign used the case of Savita Halappanavar, a 31-year-old dentist who died of sepsis during a prolonged miscarriage after being denied an abortion in Galway in 2012, to drum up support for repeal.

"I was disappointed to see the tragic death of Savita being shamelessly used as an excuse for introducing abortion into a country," he said. "That was a sepsis issue that was mishandled. Not an Eighth Amendment issue."

He felt alienated by the campaign: "It's extraordinary the way the campaign focused so much on 'me, me, me,' the rights of the mother, and very little mention of the unborn child. That was sidelined."

With the vote decided, attention is turning to Ireland's parliament, which will make new laws to govern abortions.

The referendum vote ended a harsh anti-abortion regime enacted in 1983 that required doctors to regard the rights of a fetus, from the moment of conception, as equal to the rights of the mother.

In practice, it meant Irish women had to travel abroad for terminations.

The nationwide rejection of the amendment represented a growing tolerance on social issues in the traditionally Roman Catholic country.

He said it will be remembered as "the day Ireland stepped out from under the last of our shadows and into the light. The day we came of age as a country. The day we took our place among the nations of the world."

His government will propose that abortions be permissible in the first 12 weeks of pregnancy.

It isn't yet clear what strategy abortion opponents will use in parliament in light of the unexpectedly large vote in favor of repeal. Some opposition figures have indicated they won't block legislation because they must respect the public will.

The decisive outcome of the landmark referendum was cast as a historic victory for women's rights. Exit polls indicated that the repeal was endorsed in urban and rural areas alike, with strong support from both men and women.

Backing for repeal was highest among young voters, including many who returned from jobs or universities in continental Europe to vote, but was also high among every age group except those 65 or older.

Since 1983, the Eighth Amendment had forced women seeking to terminate pregnancies to go abroad for abortions, bear children conceived through rape or incest, or take risky illegal measures at home.