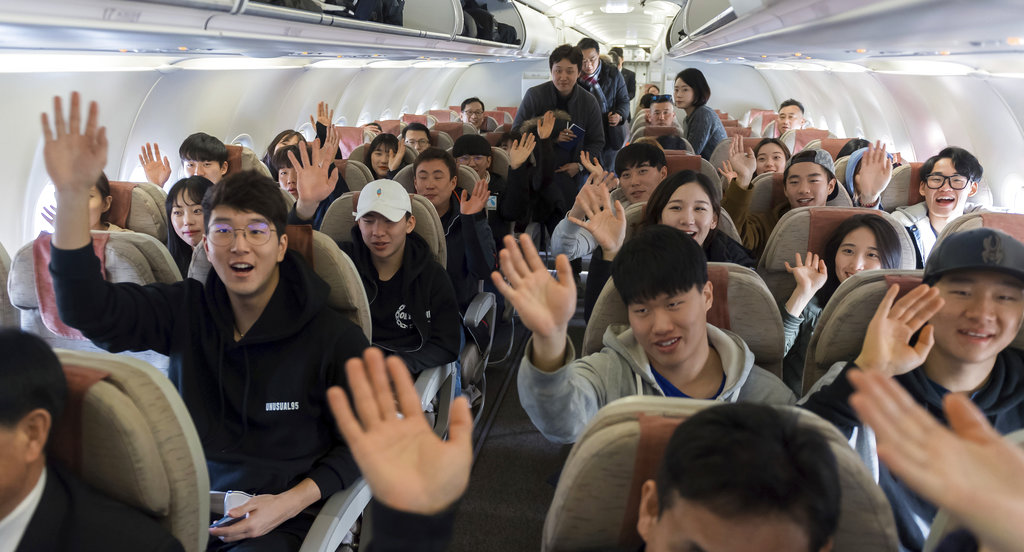 South Korean skiers on the chartered flight wave to the media before taking off to North Korea at Yangyang International Airport in Yangyang, South Korea. (Korea Pool/Yonhap via AP)

South Korean skiers flew to North Korea on Wednesday to train with its athletes in a conciliatory gesture the countries planned to mark the Winter Olympics in the South.

The chartered flight carrying a delegation of 45 — including 24 alpine and cross-country skiers, support staff and journalists — arrived in North Korea's Kalma Airport before the athletes went to the Masik ski resort, Seoul's Unification Ministry said.

The skiers are reserve members of South Korea's national team and won't be participating in the Pyeongchang Games that start Feb. 9.

The South Koreans are to fly back Thursday accompanied by 10 North Korean athletes — six skiers, two figure skaters and two short-track speed skaters — who have been invited to participate in the Olympics, according to a pool report. Twelve North Korean female ice hockey players arrived in South Korea last week and are practicing with South Korean teammates for a unified team that will compete in the Olympics.

The South Korean skiers briefly practiced among themselves at the Masik ski resort on Wednesday, according to the pool report. The South Korean and North Korean skiers didn't talk or ski together, although they later chanted "we are one" during a group photo. The skiers are scheduled to participate in joint training sessions and friendly competitions at the resort on Thursday.

"I feel a bit tense, but I think this will be a fun experience," South Korean alpine skier Kim Hyun-soo said before departing for North Korea, according to the pool report. "When else would I be able to visit North Korea?"

South Korea is preparing to host hundreds of North Koreans during the Olympics, including officials, athletes, artists, journalists and a 230-member cheering group. Liberal South Korean President Moon Jae-in sees the games as an opportunity to resume meaningful contact with North Korea following an extended period of tension and a diplomatic stalemate over its nuclear and missile programs.

Uncertainties surrounded Wednesday's trip, which South Korea wasn't able to confirm until less than two hours before the athletes departed from Yangyang International Airport. South Korea held discussions with the United States until the last minute to ensure the trip wouldn't violate U.S. sanctions against the North.

Washington agreed to consider the flight an exception to sanctions announced by the Trump administration in September that include banning vessels and aircraft that have visited North Korea from visiting the United States within 180 days, said Unification Ministry spokesman Baik Tae-hyun, who didn't elaborate further on the talks.

He said the North Korean skiers who travel to South Korea on Thursday will head to the athletes' village in Gangneung, a coastal city that will host the skating, hockey and curling competitions during the Olympics.

Other conciliatory gestures the Koreas have agreed to hold during the Olympics include a joint march under a "unification" flag during the Feb. 9 opening ceremony and fielding a unified team in women's ice hockey. A dozen North Korean hockey players have been training since last week with their South Korean teammates led by Canadian coach Sarah Murray.

While many South Koreans have welcomed North Korea's presence at the Olympics, others express unease and view the North's overture as an attempt to weaken U.S.-led international sanctions against the North while it further advances its nuclear weapons program.

Wednesday's flight was the first direct South Korean flight to North Korea since 2015, when South Korean labor unionists flew to Pyongyang for a goodwill soccer match with North Korean workers, the ministry said. The Kalma Airport on North Korea's eastern coast was the launch site for multiple midrange missile tests in 2016.