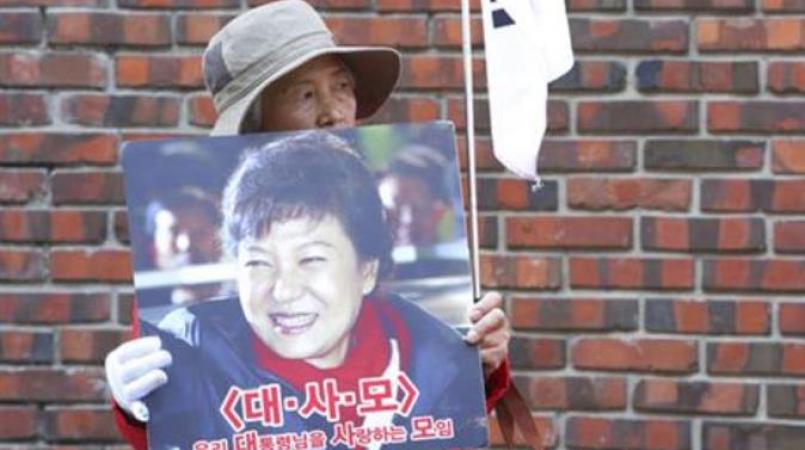 Just days after being removed from office by the Constitutional Court over a massive corruption scandal, an animal rights group accused Park of animal abandonment for not bringing the dogs with her.

Park's neighbors had given her a pair of Jindo dogs, a Korean breed of hunting dogs, when she left for the presidential Blue House in 2013. The dogs recently gave birth to seven puppies, which are now considered too young to be separated from their mother, Kim Dong-jo, a Blue House spokesman, said Wednesday.

Kim said the dogs would continue to stay at the presidential palace until they're ready to be sent to new owners. Park told staff members to take good care of the dogs before vacating the Blue House on Sunday, he said.

Kim Ae Ra, who heads the Korea Alliance for the Prevention of Cruelty to Animals, said the group filed a complaint Monday with South Korea's Anti-Corruption and Civil Rights Commission over Park's dogs. The commission then asked the National Police Agency to look into the matter. Officials from the police agency couldn't immediately confirm how the case would be treated.

It appears unlikely that Park not taking the dogs with her would qualify as abandonment under South Korea's animal protection law, which defines lost or abandoned animals as those "wandering without an owner in public places" or "left deserted in paper boxes or other containers."

"It's difficult to say that the dogs were abandoned when it seems they are being taken care of and fed properly, and will likely receive medical attention when they need it," said Lee Hyeongchan, a veterinarian-turned-lawyer.

Park's decision to leave the dogs behind touched off a heated reaction from dog lovers, who flooded social media with angry remarks.

"It seems that Park Geun-hye is a person who entirely lacks empathy, whether it's for humans or for animals," Park Jeong-eon, a 38-year-old office worker who is unrelated to the ousted president, told The Associated Press.

Park's two adult dogs also had five puppies in 2015 and the presidential office sent them to civilian owners.

Parliament passed an impeachment motion against Park in December, and the court formally removed her from office on Friday. Prosecutors plan to question her next week over suspicions that she colluded with a friend to extort money and favors from companies and allowed the friend to secretly interfere with state affairs.

FEATURED IMAGE CAPTION: A supporters of outsted South Korean President Park Guen-hye holds her portrait in front of her private home in Seoul, South Korea, Wednesday, March15, 2017. South Korean prosecutors said Wednesday they plan to summon and question ousted Park next week over a corruption scandal that removed her from office. The signs read "A group that loves the president."