Members of the Saint Lucia National Trust congregated outside of parliament ahead of a sitting of the House of Assembly today, Tuesday, May 26, 2020.

In reaction to the gathering, many police officers came on the scene.

Reporters spoke with Saint Lucia National Trust Chairperson, Alison King, on why the Trust had gathered outside parliament following the demolition of the Royal Gaol this past Saturday.

King stated: "You’re aware that on Saturday, despite an undertaking of the Attorney General, the highest legal office within the Government of Saint Lucia... we were surprised by a very efficient demolition activity that destroyed a historic building of immense importance to the people of this country in the space of hours.

So because of the way in which this agreement has been blatantly flouted by the Government, we have taken the position that this issue has now become an issue of national importance that every St Lucian should be on their guard because it is a flagrant act against our rights.

If this can be done to the National Trust, it can be done to anybody. The Government doesn’t stand by its word by the end of the day, we are in a position where we cannot trust our leaders to stand by their word." 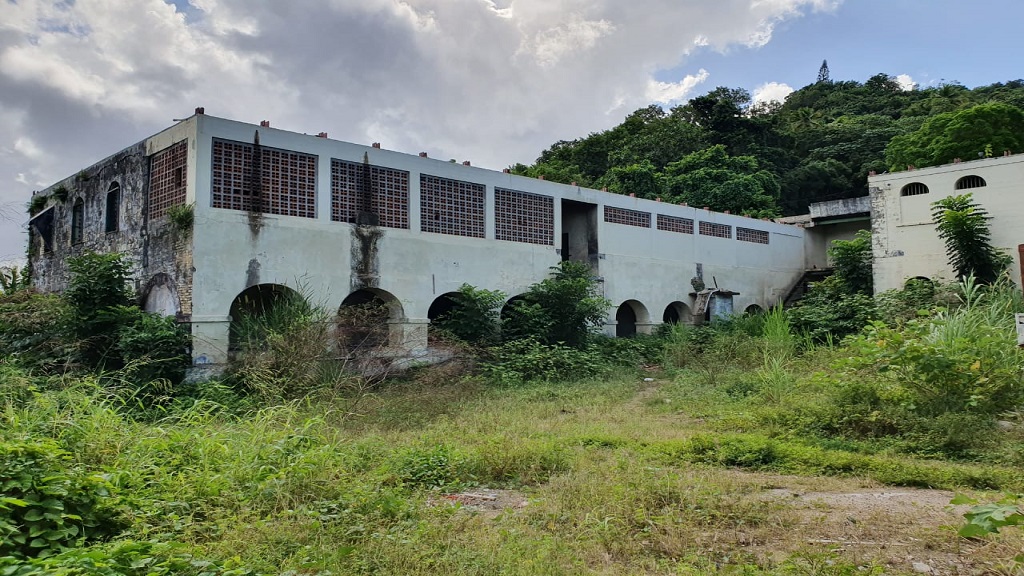 The Royal Gaol before demolition

King confirmed that the feeling in response to the demolition was one of hurt for Trust members: “It was a very emotional day for us because this building was symbolic of everything that the Trust stands for and it is such a loss for the people of this country, for our children, our grandchildren, for the future of this country – such a massive loss."

King was asked what she thought of the strong police presence on the scene to which she responded: “Well, I’m assuming that if we behave in a decent manner that we will have no issue with the police. I don’t know why they’re out in such large numbers, we are not here to cause trouble. We are just here to make our presence felt so that our parliamentarians will understand as they go through those doors today that they represent us.”

King was asked about criticism of the Trust in that the public relations around the Royal Gaol’s historical significance were perhaps lacking. She said: “Well this thing has been going on almost two years and we made quite a lot of noise two years ago when they first tried to demolish the building, so I think it would be dishonest of people to say they were unaware of the Trust position in relation to this building… so anybody who went in there on Saturday and demolished knew what they were doing. In fact what they did there was a direct attack on everything that the National Trust stands for.”

Prime Minister Allen Chastanet shared plans for a new Police Headquarters and Halls of Justice on the site to his Facebook page one day after the demolition. In his accompanying message he stated: "In October of 2018, we commenced the preparations of the site for the construction of a new Police Headquarters which will strategically include 6 court rooms to centralize the judicial system as well as for security purposes. This was delayed for 1 year and 6 months due to an injunction which was filed." He also said: "How much longer must our police and justice officials wait before they get the working home they so rightly deserve?"

In a press release issued by the Trust yesterday, they responded saying: "This statement is highly disingenuous on the part of the Prime Minister.  As earlier stated, the injunction was filed more than eighteen months ago, on September 9, 2018, and, as the Prime Minister must or ought to know, the injunction was withdrawn six and a half weeks later, on October 24, 2018.  As such, responsibility for delays in the implementation of this project cannot be reasonably ascribed to the injunction filed by the Trust.  Such a claim is simply not true."

Sections of the release also stated:

On the morning of Saturday, May 23rd 2020, the Government of Saint Lucia proceeded to demolish the historic Royal Gaol Buildings, structures of significant historic value by virtue of their age, architecture, uniqueness and association with historic events within the Saint Lucian built heritage and cultural landscape context.

The Royal Gaol was completed in 1827 after three years of construction at a cost of significance in its time, £5,417. It was the only known structure in Saint Lucia dating to the 1820s and was the oldest known standing structure in the Castries City Centre. In terms of its scale relative to the other remaining structures of its period, it was also a significant building, with over 7,000 square feet of floor space.  Henry H. Breen, contemporary writer, historian and later Administrator of Saint Lucia writes in 1844 that the Gaol was one of the most significant structures in the town of Castries and that “The Gaol is one of the best in the West Indies.” [St Lucia: Historical, Statistical, and Descriptive, pp.25-26].  It was one also of very few remaining artefacts of the enslavement period.  Yet, it now rests at the Deglos Landfill.

It was the day on which the Government of Saint Lucia openly and blatantly demonstrated its disregard for the rule of law, our patrimony, good governance and integrity in public office. The Government of Saint Lucia and the holders of its highest offices showed that they cannot be trusted when they enter into negotiations and execute agreements and undertakings, demonstrating a lack of moral leadership and integrity. By their actions they have demonstrated their utter contempt for Fair Helen’s patrimony and the things that uniquely make us Saint Lucian.  This flagrant and wanton destruction of who we are as a people is sadly an indelible stain on all Saint Lucians and should not be accepted by anyone who truly loves Saint Lucia." 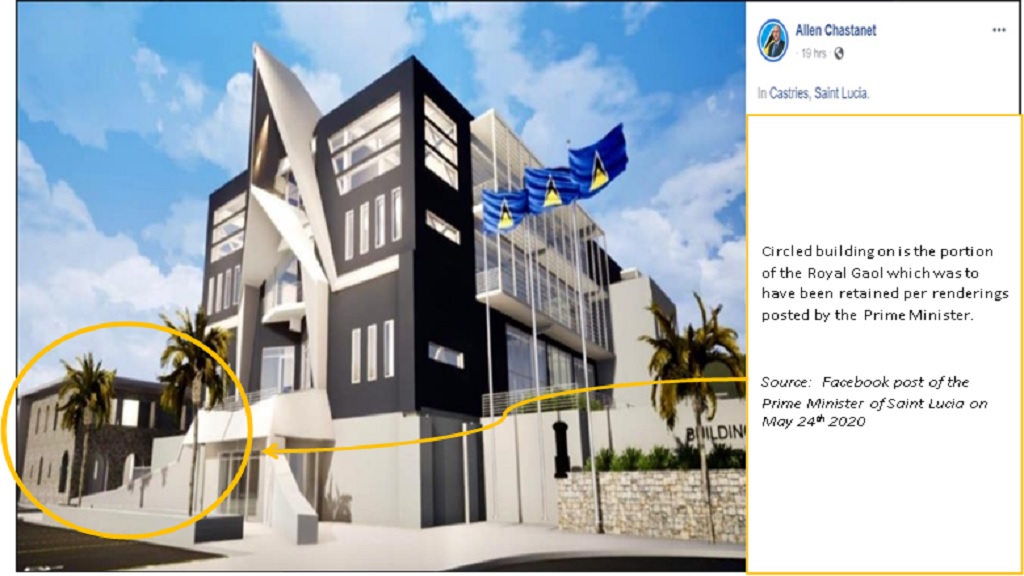 "Throughout this process, the Trust went to great lengths to assure the Government and the public that it supported the much-needed Police Headquarters Project and its only concern was the protection of the historic structures on the site and their integration into the final project.  The buildings are now gone, and we are left with more questions than answers:

The way in which this demolition occurred is telling.  There was no effort to engage the Trust despite the relatively protracted and very public history of this matter.  All involved would have been aware, and most were in fact party to the Undertaking.  Instead, the demolition was a well organised exercise executed efficiently on a Saturday morning.

This approach deliberately intended to surprise and frustrate the Trust, and to ensure that this time, the Government’s demolition of our citizens’ important historic buildings would succeed.  A Government’s role is to protect its people and their heritage.  We did not expect this, because we were comforted that we had an agreement with an upstanding and responsible entity, our Government. 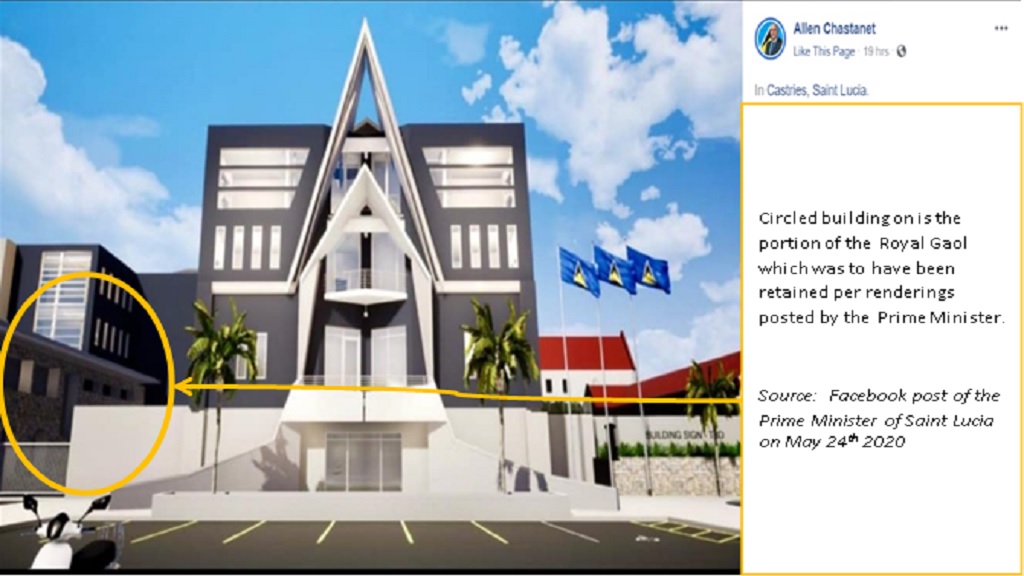 The day after Government demolished the Royal Gaol the Prime Minister posted the proposed design on his Facebook Page to “…invite you to view the plans for the construction of the Police Headquarters and Halls of Justice in Castries”.  If you look at the bottom left corner of the renderings posted you will see the Royal Gaol included in the design.  We find it impossible to understand his logic unless we consider his disregard for our patrimony, or his inability to understand the drawings he posted, or his belief that you will believe anything he says, or all of the above."