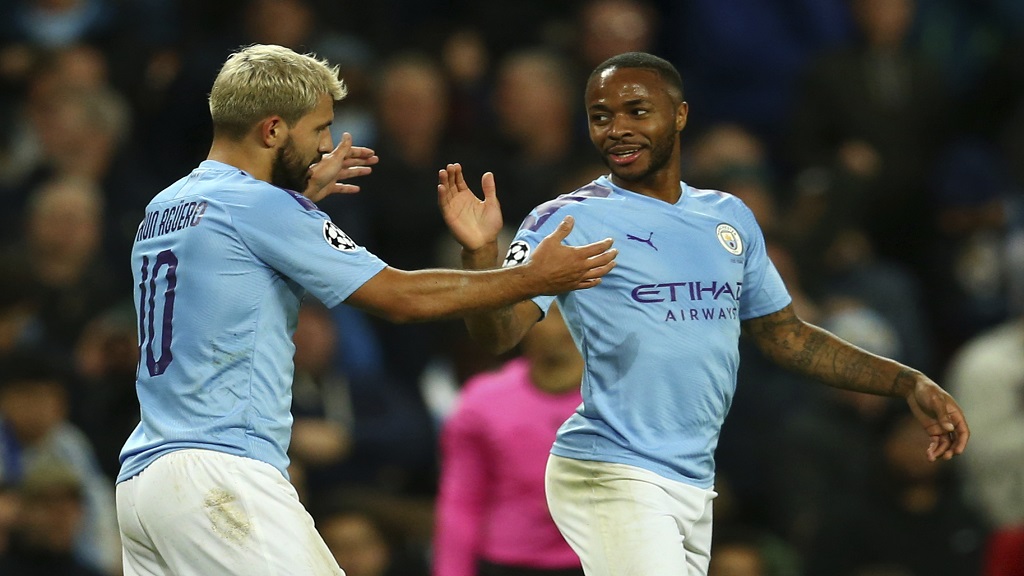 Raheem Sterling scored a second-half hat-trick as Manchester City moved closer to securing their progression from Champions League Group C with an emphatic 5-1 win over Atalanta on Tuesday.

Ruslan Malinovskiy's penalty capped a fine start for Atalanta, but the Serie A side was little match for City once Pep Guardiola's men - led by the impressive Sterling - clicked into gear.

Sergio Aguero was the benefactor of Sterling's work in the first half, tucking in from a brilliant cross before converting a penalty the England forward won.

Sterling took matters into his own hands from then on – his treble coming in the space of 11 productive minutes for City, though the emphatic win was marred by the late dismissal of Phil Foden.

Atalanta squandered a three-goal lead against Lazio in Serie A on Saturday yet were swiftly on the front foot in Manchester, taking the lead in the 28th minute. Josip Ilicic forced Fernandinho into a clumsy challenge, with Malinovskiy making no mistake from the resulting penalty.

City were soon dealt a blow as Rodri was forced off with a hamstring injury, though Kyle Walker would have extended the hosts' lead if not for Pierluigi Gollini's smart stop.

There was an injury concern for Aguero at the start of the second half but, after the striker was deemed fit to continue, Guardiola's side had their third. Kevin De Bruyne teed up Foden, whose touch fell kindly for Sterling to hammer home from close range.

He doubled his personal tally within six minutes, lashing beyond Gollini after racing onto Ilkay Gundogan's pass.

After Remo Freuler had a goal ruled out by the offside flag for Atalanta, Sterling knocked in Riyad Mahrez's cross to complete the rout, though Foden's second booking for a foul on Marten de Roon forced the hosts to play out the closing minutes with 10 men.

Guardiola won't be concerned if City win no titles this season