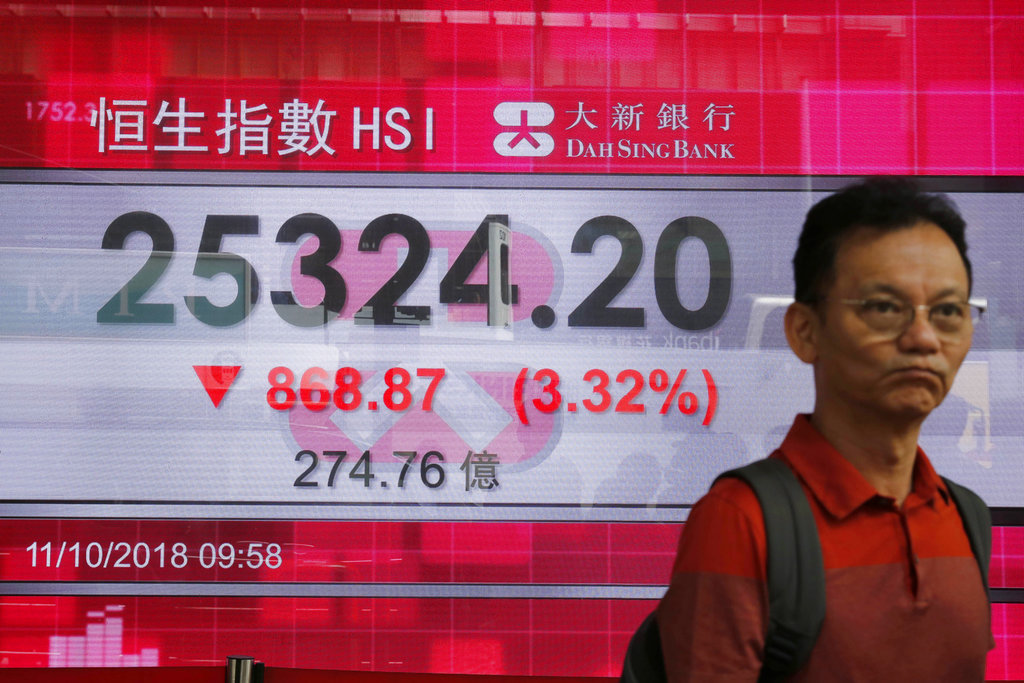 A man walks past an electronic board showing Hong Kong share index outside a bank In Hong Kong, Thursday, Oct. 11, 2018. Asian markets tumbled on Thursday, after Wall Street slumped on a heavy selling of technology and internet stocks. (AP Photo/Kin Cheung)

European shares sank after Asia closed sharply lower, auguring another drop in the U.S., which saw its major indexes tumble on Wednesday.

Investors will be looking ahead to U.S. inflation data later in the day. A high reading could fuel expectations that the Federal Reserve will keep raising its interest rates at a steady pace, reining in the easy money policy that had fueled stock markets in recent years.

"Equity markets were pulverized today," with investors in "full out retreat," analyst Stephen Innes of OANDA said in a commentary. The "latest sneeze" from Wall Street "could morph into a global markets pandemic," he added.

"Equity investors are surprised by the pace at which rates have risen," Marcella Chow, global market strategist at J.P. Morgan Asset Management, said in a report.

On Wednesday, U.S. President Donald Trump said the Federal Reserve "is making a mistake" with its campaign of rate increases. "I think the Fed has gone crazy," he charged.

Sentiment also has been dampened by the spreading U.S.-Chinese tariff fight over Beijing's technology policy. The International Monetary Fund cut its outlook for global growth this week, citing interest rates and trade tensions.

The U.S. Treasury is due to release a currency report that some analysts suggest might change the official stance on China's exchange rate policy. Chow said it was unclear whether the Treasury might label Beijing a "currency manipulator" — a status that could trigger penalties — or whether it could be "another pretext for the next round of tariffs."

Adding to potential U.S.-China tensions, the Justice Department announced Wednesday it arrested an official of China's Ministry of State Security on charges of trying to steal trade secrets from U.S. aerospace companies.

Francis Tan, an investment strategist at UOB Private Bank, says "the valuation of U.S. stocks, especially tech stocks, is still pretty high," and investors could be tempted to not buy into them yet.