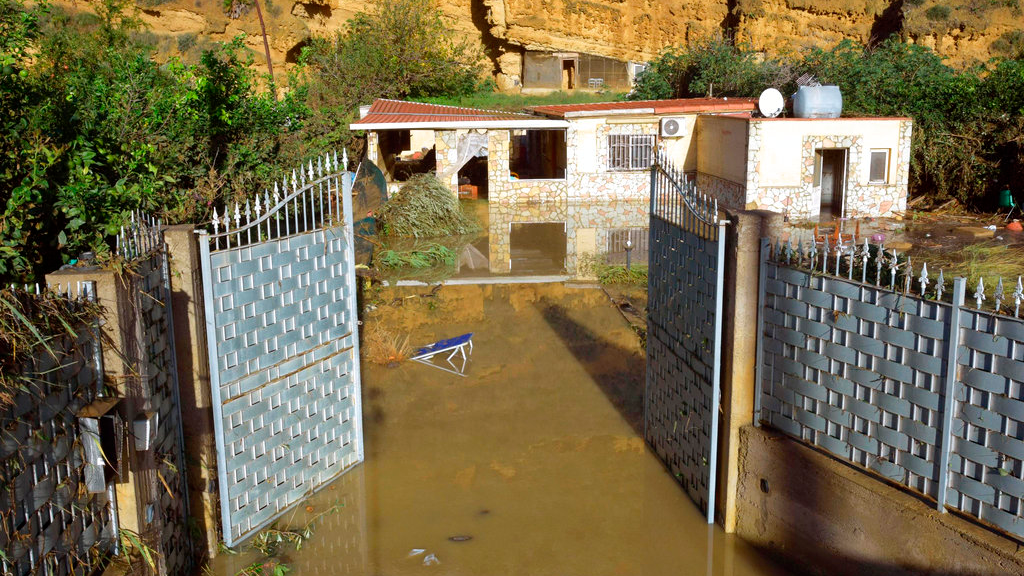 A view of the flooded house where nine people lost their lives in Casteldaccia, near Palermo, Italy. (Mike Palazzotto/ANSA via AP)

Rainstorms lashing Sicily have killed at least 10 people, Italian Premier Giuseppe Conte said before heading Sunday for the stricken Mediterranean island. State radio said nine of those victims were in a home that was flooded by a rapidly swelling river in the countryside near Palermo.

The radio report said one man survived the house flood late Saturday night by clinging to a tree. The survivor used his cellphone to call for help but it was too late for the others, including a one-year-old baby and a three-year-old child. The victims were from two families who had gathered in the country villa for the weekend.

Another confirmed fatality was a man whose body was found on a guardrail along a Palermo-area road after floodwaters swept away his car, Italian news reports said.

State TV also said two people were killed by the storm in the outskirts of Agrigento, a Sicilian tourist town famed for its ancient Greek temples. If confirmed, those deaths would raise the overall death toll in Sicily to 12.

At least two persons were missing Sunday in other incidents in Sicily after floodwaters swept away their cars, including that of a doctor heading to the hospital of the hill town of Corleone.

Storms had battered northern Italy earlier in the week, killing at least 15 people, uprooting millions of trees near Alpine valleys and leaving several Italian villages without electricity or road access for days.

In Casteldaccia, the hamlet where the river flooded the home in Sicily, neighbor Maria Concetta Alfano said she, her husband and their adult disabled daughter fled after barking dogs drew their attention to the rising waters in the Milicia River, the Italian news agency ANSA said. It quoted the husband, Andrea Cardenale, as saying as he drove away as "water was up to the hood of the car."

Rescuers worked Sunday to retrieve the bodes in the home.

10 days after rescue, Italy lets all migrants leave a ship