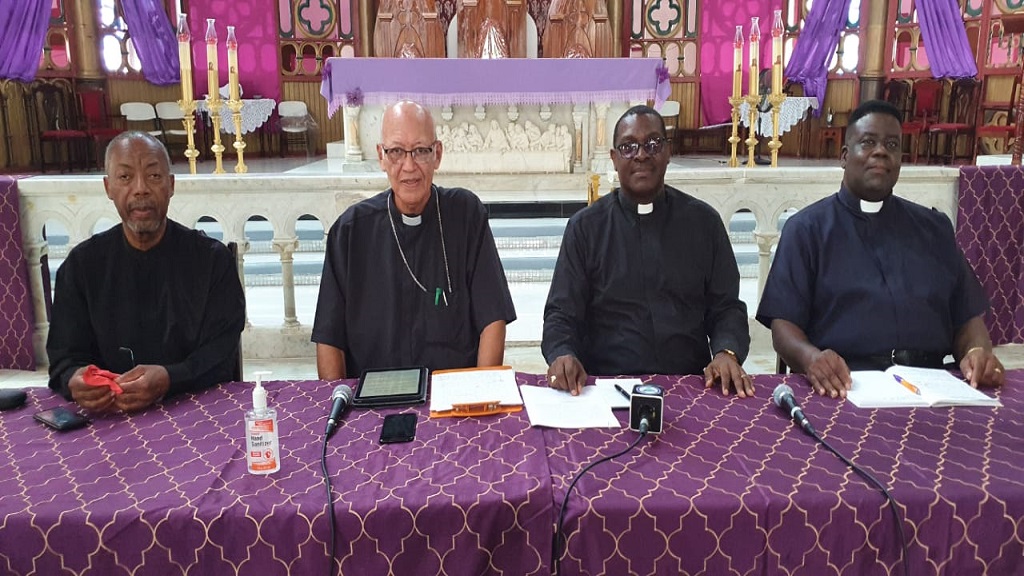 "The coronavirus has brought many countries all over the world to a virtual standstill. It has created fear and anxiety in many people and many countries have had to take stringent measures to limit its spread especially within communities. St Lucia is no exception.

The Roman Catholic Church… has not been exempted."

His Grace Archbishop Robert Rivas began his statement thusly this morning at a press conference held at the Cathedral of the Immaculate Conception in Castries, on the church's response to the coronavirus (COVID-19).

He continued: "Some of the things that are dear to us in the practice of our faith have to be suspended or omitted temporarily in the interest of the common good and welfare of our nation.

From this weekend, March 21-22, and until further notice, all public Masses throughout the Archdiocese are suspended."

However, Rivas said that for Sunday Mass: "The Vicar General and Archbishop will celebrate Mass using the media, TV, radio and live streaming. In this way, we hope to reach as many of our members…" He noted that conversations were ongoing with a television station but that logistics remained to be worked out.

Rivas soberly expressed the gravity of the situation, "Church members are encouraged to stay at home and to avoid even gathering in groups for prayer and other religious activities. Social distancing is very important at this time. We are battling with a virus that is taking lives and crippling whole nations."

For funerals, he said only immediate family members should attend in churches. The church discouraged assemblies of more than 10 persons in keeping with recommendations with national officials.

Weddings and baptisms were recommended to be postponed.

All Lenten retreats both for youth and adults were said to be cancelled with immediate effect.

Regarding the celebration of Easter, further updates were promised but the stated protocol is in place and will remain unless there is a major change in the virus situation.

"There is a war on against a deadly virus, be good Christian soldiers in the battle, I am counting on you," said the Archbishop.

Police give stern warning to criminals amid coronavirus pandemic

National Day of Prayer in St Lucia on Thursday March 19